Rhino crashes when starting by opening a file

Rhino crashes frequently when starting it by opening (double-clicking on) a file. This error message shows up even though my version is actual: 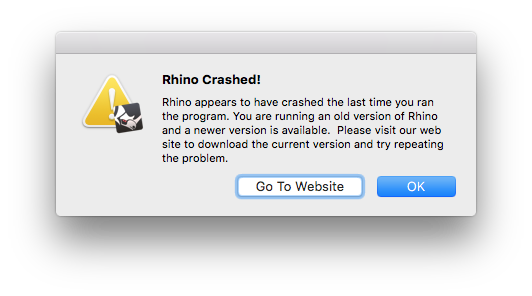 my version is actual: 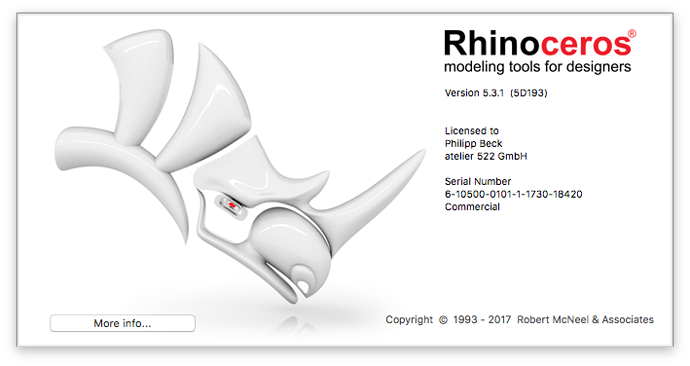 You have more than one copy of Rhinoceros installed on your Mac, and double-clicking on a 3DM file is starting one of the obsolete versions.

Firstly I have to explain:

When I clicked one of my files, Rhino crashed, AND somehow achieved to save the file and saved it as “small” (just geometry).

So what I got was:
file opened, Rhino crashed, saved just geometry ( discardes everything else), and our file system has NO versions:
In one double-click Rhino killed all info despite just the geometry.

This is how the file quick look icon looks:
(file name blackened by myself)

Did I do anything wrong?
Should we disable the autosave for Rhino for all our colleagues?

“option: small”, which discardes all layer, hidden, and locked info on the whole file content (obviously).

It doesn’t actually, Save Small only discards the render meshes. Save “Geometry Only” discards the layers, colors etc.

Yes, that´s what I did, both (“SaveAs” with “only geometry”, but just yesterday, not even once today.
Today i saved a lot of files just regularly, which worked correctly.

Let’s solve one problem at a time…

Start the 5.3.1 version of Rhinoceros.
Click the New Model button on the splash screen.
Run the _TestFindAllRhinoApps command.
Post a screen shot of the dialog that appears.

OK, I´ll do when at work tomorrow.

Thanks for having a look at this! 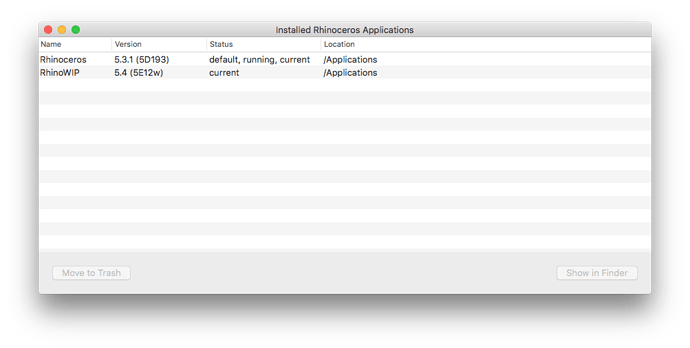 Now I started Rhino a from the App Icon, and starting the file removed everything than the geometry – directly after opening my file from within the “Recents” section from splash screen.

I managed to save my file on the desktop prior to closing; afterwards I selected “Do not save”, though it saved the geometry-only file nevertheless.

That doesn´t seem to belong to the file location (NAS).
Even the same file on the desktop behaves the same.

Maybe there´s some odd setting / bad content in the file.
Other files work for now …

work-around:
Only force quitting Rhino from OS X 10.11.6 helps not to save the wrong file geometry.

But now I don´t know how to open my file in any way.

It looks like you have already deleted the obsolete versions of Rhino you had on your computer. I was hoping to see what old version of Rhino was causing the crash. Regardless, that fixed your crashing problem.

As far as the second problem, your sample model contains only geometry. When Mac Rhino opens that model it needs to create additional items like viewport definitions to be able to display the model. That incorrectly marked the model as changed. This will be fixed in the next WIP release.

your sample model contains only geometry

Yes, but that wasn´t made up by me – or at least not what i intended to do.

As described before, somehow Rhino deleted all the info on starting the file (and starting Rhino with starting it), possibly because i saved with “only geometry”, but with other file(s), NOT THIS one:

Yes, that´s what I did, both (“SaveAs” with “only geometry”, but just yesterday, not even once today.Today i saved a lot of files just regularly, which worked correctly.

Are you still having an issue with saving Rhino files? If so, please describe your process so we can duplicate it here.

We made some changes in the latest RhinoWIP (5E41w). Please give it a try. Is the behavior any better?

This attached newly created file makes Rhino crash when being dragged on the latest WIP version: 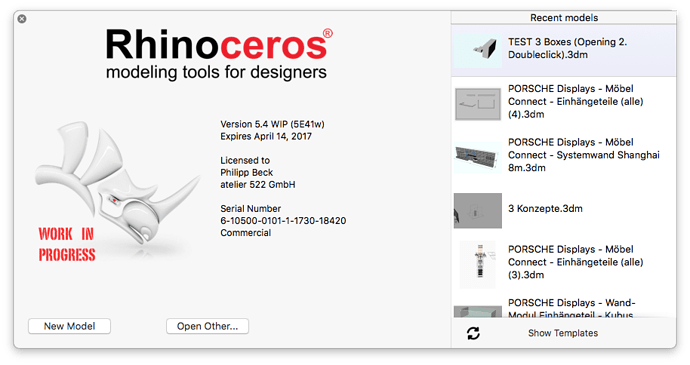 I also sent a report through Rhino.

Thank you for submitting a crash report. I wasn’t able to duplicate this myself, but found the issue using the crash report. This will be fixed in the next WIP.

This should be fixed in the latest RhinoWIP (5E44w). Give it a go.

Great to know that it helped to find the error, hopefully.

Thanks for your work!

It´s true. Totally true. You have to believe it.

Version 5E44w now works. No crashes from dragging a file on the dock icon.

To be honest, the “flattening” of the file in my first entry here happened most likely by an accident; the flattening seems to not be caused by this error.