How can Unity be useful? To render?

Well if you need rendering in real-time, Unity and Unreal are useful.
For example for a VR presentation, animation, simulation, short film or game dev.

Could you explain better these passages that I don’t know, please?
Mesh convert , UV mapping, Painting

Is a long process to be resume here

I talk about UV mapping in my treads
Some links:

Quoting the Ministry Of Flat: [image]

h_ttps://www.quelsolaar.com/ministry_of_flat/ BTW, I stumbled on Eskil and his UV-wrapper from watching his take on programming with C in his video “How I program in C”: [How I program C] Cool guy trying to look at things differently. I like that. // Rolf

My experiences were full of obstacles as well. So I’m thinking of making a course to show how to deal with issues. In long: Making the UV mapping is complex. I make often bug reports isolating each issue https://mcneel.myjetbrains.com/youtrack/search/Reported%20by%20me-665#issueId=BO-2982 I use RizomUV Real Space as a helper to understand what is happening with the UV mapping. I make the Unwrap in Rhino and cheche in RizomUV Real Space the UVs because can conserve Rhino vertex normals. But…

When you add a ground plane you always get the actual geometry. The problem here is the shadow catcher implementation of Cycles which currently has its drawbacks like the ones I mentioned. That is why I suggest using ground plane with material, that gives better lighting and light bounces between object and ground.

update JUL 2019 FROM SURFACE TO MESH DEVELOPMENT WORKFLOW FOR RENDERING

[GOGO-GURU-R13-F1-rear-2019-07] RizomUV let me fix UV mapping and work with it. It is a specific tool for UV mapping. I use to make the UV mapping projection in Rhino and often since my target is game development or VR, improve them inside RizomUV. @Micha I finish purchasing RizomUV Real Space. And I made up a bridge to Rhino. This allows a fast interaction. I call it “AM Mesh Bridge” for UV mapping just in case there will be a better official one. It allows to easily move the mesh back and f…

My experiences were full of obstacles as well. So I’m thinking of making a course to show how to deal with issues.

I just started using Painter with Rhino, I would be VERY interested in any course you publish!!

I do not know if I’m capable to make a course. My English is not to the level.

Maybe something written then? I always understand your writing.

May I mention a simplified pipeline.
I’m a UVs, & Rendering beginner, and that seems to work mostly well for me. most these areas have been improved/developed since the time of @AlanMattano, workflow article, perhaps allowing for simpler methods.

By using Nathan’s Import3dm plugin in Blender, you get the whole model from Rhino in one go, the layer structure and many other things.

Blender has now lots of good tools for UV, [I don’t know how to use most of them yet…] but the automated ones often works well.

then .FBXing to Painter for texturing. and exporting the textures.
It seems the simple Metal Roughness preset is good for rhino, just changing the Normal’s to Open GL [ if you gone render in Bella, Bella can flip the normals so even that is not necessary. Not sure if Rhino Cycle can also flip].

I’d love to learn more about these pipe lines. and what Alan think about this simplified approach…

I’m very much in the same place as you are - just getting started with texturing. I’m curious - the UV unwarp tools that come with Substance have a lot of people excited - what do you feel you’re getting with doing the UVs in Blender instead of simply going straight to Painter?

Painter’s Auto unwrap means you need to also export the mesh from painter [which I simply haven’t tried yet]. then in blender you can mark where you want the seams, in case the Smart UV Project is not smart enough. [you and use the Tri-Planer projection in Painter to blend over a seam but it may not be ideal on some parts]

But also simply because I currently render in Blender since my computer is too old to render in Rhino. Plus the rendering UI in Rhino is even more confusing than the Blender one…

It does sounds like the shortest route of them all Rhino > Painter with auto-unwarp than exporting the mesh back to Rhino.
As long as you get the textures to sit correctly, this looks like the quickest simplest way.

That’s the workflow I’ve been experimenting with - there’s a few minor quirks I’m still trying to solve - not sure if the limitation is the UV unwrap in Painter, or my own lack of skills. Likely the latter…

I’ve had a couple of instances lately that meshes got corrupted I suspect the .fbx had something to do with this. [Alan also mentioned issues with the .fbx in his workflow article]

if the textures doesn’t look in the render the same as they were in Painter, I would first check the mesh for errors.
Rhino is very good in pointing out problems in a mesh, and not so good at fixing them.

So far the issue that’s given me the most trouble is some “print lines” coming through on the normal channel, where my surface seams are. If I can get that resolved, it’s a really simple and straightforward workflow.

the UV unwarp tools that come with Substance have a lot of people excited - what do you feel you’re getting with doing the UVs in Blender instead of simply going straight to Painter?

Hi Sky, we use Substance Painter and Blender extensively. We rarely touch their UV tools. I don’t see them being good for any technical surfacing or controlling the flow and scale of UV. The autoUVs of substance is fine for making reptiles or rocks, not good for making a technical pattern, fabric weaves or placed graphics on surfaces.

We used to work in Modo and their UV tools were great so we had been missing a good replacement and still go to Modo just for that here and there.

This year we started using Rizom UV and it’s really good. We like it a lot. If you are doing a lot of UV work is a good investment.

Blender has now lots of good tools for UV, [I don’t know how to use most of them yet…]

For Blender users, I strongly recommend this old awesome UV mapping course made by Billy McDaniel. Is made with the old Blender interface, but the explanation is fantastic: https://www.udemy.com/course/learn-uv-unwrapping-with-blender-for-unity-3d-game-design/
The problem with Blender UV is that makes an average vertex normal and that is not good for hard surface design.

Yes but is not capable of unwrapping cylinders correctly. I made a bug report to Painter about it. They are trying to improve it. So is not useful for hard surface workflow.

most of these areas have been improved/developed since the time of @AlanMattano, workflow article

Thx but some of my bug reports are fixed. So there is a workflow now.
The merit goes to developers for bug fixing. In particular Jussi Aaltone!

There are so many things that can go wrong without the visual part of a video.

I’ve had a couple of instances lately that meshes got corrupted I suspect the .fbx had something to do with this. [Alan also mentioned issues with the

One of the problems is how Rhino 4>7 is representing the UV mapping mesh. Bug fixing was move to Rhino 8
Here are some bug reports to be fix:

To be clear I report it 2 years ago but is a Rh4 problem. Software development is hard!
I expect that Jussi will fix these important bugs in Rhino 8 at some point.

Yes is important to specify RizomUV Realspace because the other one (more attractive because of its affordable price) is not working with Rhino.

Yes is important to specify RizomUV Realspace because the other one (more attractive because of its affordable price) is not working with Rhino.

hi Alan, I didn’t know this. We use the Virtualspace version, which does all we need and it’s easier to use. When we reach the UV unwrapping stage of a model we are not in Rhino anymore, but I’m curious how does one version work with Rhino and the other one doesn’t? are you talking about the bridging plugin?

As far as I know, I was having problems with VirtualSpace
In Virtual Space, Rizom handles the vertex normals and recalculates them.
In Realspace, Rizom uses and preserves Rhino mesh vertex normals.

thanks, great to know Alan, we have not tried it with meshed NURBS models, and I can see for that case it would be a problem. I’ll look more into it and keep it in mind. We might have to upgrade t Real Spaces for that use case.

I’m really at the point with UVs where I don’t know what I don’t know - I’m that new. But I do know that a lot of what I’ll be needing to do in the future are fabric weaves, placed graphics, hard surface stuff, all the rest. So, I’m not currently doing a lot of UV work, but I know that I will in the future, and hoping at this point not to go down rabbit holes that aren’t productive.

hoping at this point not to go down rabbit holes

Well I’d love your input, as well as @gustojunk on proposed workflows for what I want to do. There’s a few types of projects I’d like to do - all transportation based really - aircraft and automotive, no surprise there. For the aircraft work, I’ve always been really impressed with this guy’s work:

The amount of detail is what I’m hoping to do, and it’s really the sort of thing that needs UVs and texture mapping - there’s just so much really nice subtle stuff going on there that really ties it all together. It’s really not the sort of thing that can be done procedurally or with just a shader. I’m hoping one day to be able to make models in Rhino that I can texture to that level.

In terms of automotive, this is not an amazing render by any means - but the ability to do liveries like this without having to actually cut my models up would be great: 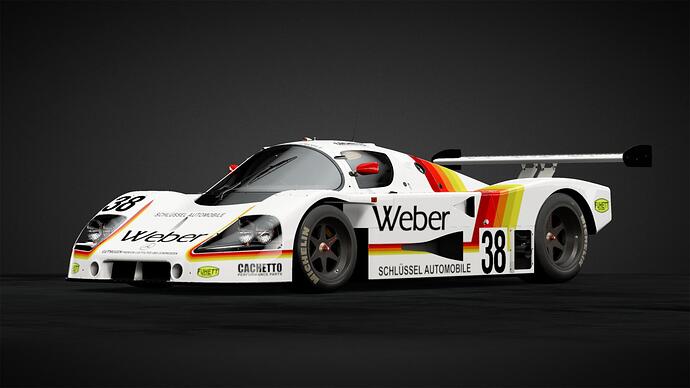 Obviously the stripes are what would be better served by texture mapping - the rest can just be done as decals really - but would also be nice to be able to extend something like this even further with some subtle weathering.

Since you two seem to have a much better grasp of this than I do, I’d love to hear your thoughts about what the right workflow would be to get results like this from a NURBS model.

I do, I’d love to hear your thoughts about what the right workflow would be to get results like this from a NURBS model.

the stripes are what would be better served by texture mapping

No. Do not cut the body for the stripes. Apply them as decals. Because is more productive overall, and less time-consuming (If you need to sell the mesh or print it, better without cuts). And if you what to change the car paint job later you can.