How many folks using substance suite with rhino?

I have it working ok in Windows and I don’t see why you wouldn’t have. I think it is going to take a McNeelie to solve this, but as you have posted in an old thread it may not spring to their attention, so let’s nudge @scottd…

hey John, can you run the systeminfo command in rhino and post the result? or send it to us at tech@mcneel.com?

Hi Kyle,
This substance material import issue isn’t critical by any means. It’s simply for experimentation at the moment, but thanks for looking into it all the same.

everything looks good there… can you list steps you are using and where it fails?

you should be able to:

load sbsar files into Rhino would be really great

I have done wheel using Rhino and texture using Substance Designer. The height map displacement tessellation pattern was done in it. Here is the final result: https://www.artstation.com/artwork/DxGG1R

@AlanMattano
Can you share your experiences? Or links to the threads you made?

My experiences with Rhino & Substance Painter are mixed… I ran into some obstacles. Rhino’s texture mapping compatibility with other software is crucial here.

My experiences were full of obstacles as well. So I’m thinking of making a course to show how to deal with issues.

I use RizomUV Real Space as a helper to understand what is happening with the UV mapping.
I make the Unwrap in Rhino and cheche in RizomUV Real Space the UVs because can conserve Rhino vertex normals. But my actual problem is that Rhino export multiple unwelded meshes of what it looks like (in Rhino) a single merge polymesh. I can’t use external tools to make a proper UV mapping. And I hope that @Jussi_Aaltonen (that looks like working hard on all of my bug reports) will fix this bug one day.

I do not tile the texture anymore going out the UV space. I use to do that but later baking shadows is not possible because of the overlapping of UVs. I never overlap UV. I try to fit the UV mapping into the 1:1 space without repeating.

At first, as a beginner, when making, for example, repetitive wall patterns (architectural), we tend to use more than the 1:1 UV space. When we became more expert we try to avoid that (we stay inside 1:1 space), especially if is an Industrial design object for real-time rendering. Overlapping UV projection creates issues. Going outside only if you are rushing is a compromise.

With a Designer, you can build complex meshes that will be displayed inside your Rhino mesh or surface using the computational expensive tessellation displacement high map texture.
example: Substance Designer 2021.1 New Feature: Export Mesh - YouTube
Substance Designer was the very first product for making complex textures to a node base.

Then I use Substance Painter ( suggest indie perpetual license in steam if you want to use only Painter and Designer) that is an evolution of Designer. Making nodes is time-consuming so I prefer Painter over Designer. Making nodes is useful for creating mesh tessellation but you can do that also in Painter by painting. I use photo textures. In Painter use photos as the source. Then I export the final textures to Rhino or else for rendering.

For real-time visualization to the client, I use in order of complexity Painter (via Iray that is included), Rhinoceros 7 new rendering, Unity HDRP VR in future Unreal 5, and complex rendering Octane. Other options are too expensive from my point of view.

Here are the results of my work mostly done in Rhino RizomUV and Painter :

And a project that I’m working on right now:

Later I will respond to more, but for now quick question:

What approach to baking shadows do you take? You want them merged as one Diffuse texture? Because otherwise, you could have whatever UVs you want for the textures and separate UV channel (non-tiling) for the “Lightmap”. This is how it works in Unreal, and probably in other places.

What approach to baking shadows do you take?
Because otherwise, you could have whatever UVs you want for the textures and separate UV channel (non-tiling) for the “Lightmap”.

Yes, I prefer a game engine “Lightmaps” ready. I do not use lightmaps (in Unity) to increase fps and because I often move lights real-time (shadows) and takes too much lifetime. I never know what final destination can end up for the object so I try to build the textures as much as flexible as possible (I mean yes Lightmaps ready). For example, for now, I do not use UDIMs UV setup. For a hero object asset, I separate it into pieces with different UVs using 1:1 space. Painter handles well using tri-planar projection instead of default UV projection. Lightmaps are very nice but if the original textures are ok, real-time (and RTX) it’s good enough for now. Future real-time lightmaps will be awesome.

I bake AO in Substance Painter or better in Blender (using to Blender) and import it into Painter when starting. This also let you understand if there are overlapping UVs. Put a small amount of AO into the final color texture to simulate some radiosity shadow (in case AO is not used). I use also a AO texture on the real-time material for micro details shadow. And since object surfaces are always dirty with big patterns [inspiring source] I prefer using UVs 1:1 and increasing resolution. If it is 200-foot superyacht deck I isolate the sector mesh where VR will be to increase the size of each individual UV( only for that sector). Using a secondary tiled texture inside the shader for mixing color textures doesn’t work well for me because of bad color mixing (at least in Unity PBR) but yes for the bump texture.

Why you need a sbsar file into Rhino?

Because I like to be able to set/change the texture parameters directly in Rhino of course. No need to keep a other app open then and mess with texture import.
(Authoring the substance is a completely other story.)

It’s intended for rendering, right? No matter if realtime or not.
Best regards
Eugen

I just started using Substance materials in Rhino. Do they work on meshes differently than Nurbs or SubD objects? My materials work well on Nurbs and SubD, but when I put them on a mesh, they turn black in Raytraced mode. They look fine in Rendered.

Can you share the model with me for investigation? Thanks.

Sure thing. It’s 50mb, so I’ll send it through Rhino - Upload to Support

Thanks, I received the file. On my machine in Rendered mode it looks like this: 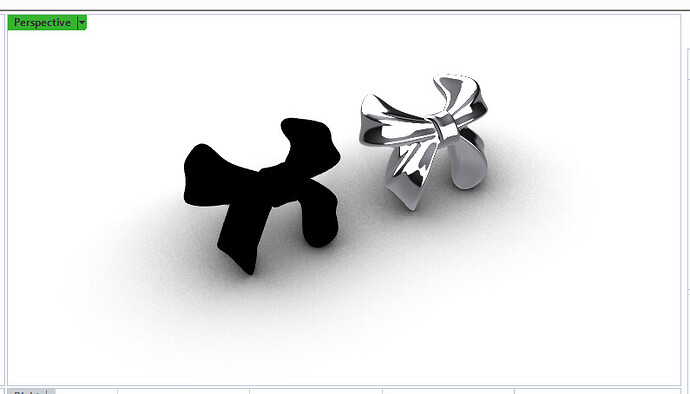 So same problem between Rendered and Raytraced modes.

Anyway, all maps in this particular material are useless, since there is no variation in them. Just remove them and set their values directly to the channels they are on. You’ll save 6 times a 1024x1024 texture worth of memory. The biggest problem on the mesh model is caused apparently by the normal map. This map is unnecessary.

The material can be simply represented with:

Ok, so it looks like I need to clean up my materials and remove excess maps. I made this material in Substance Alchemy and it exported with all of these maps. I’ll admit, I don’t quite know what they all do.

I’m trying to put together a “family” of metal materials with different finishes, some of which do use that Bump/Normal map. @nathanletwory, What can I do with this sort of material?
Platinum, Sandblasted.rmtl (8.7 MB)

Not sure yet why the one with normal map looks incorrect.

Quixel Mixer is free and I hope it stays free indefinitely. I use it to create textures for Rhino PBR material using this workflow https://youtu.be/lvGbhGcgKZo 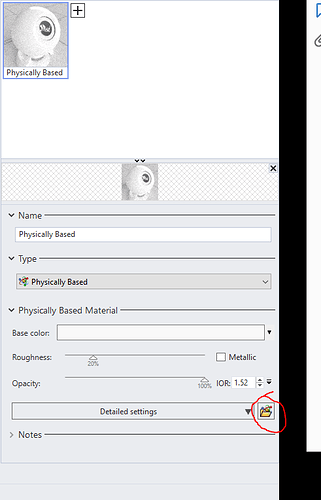 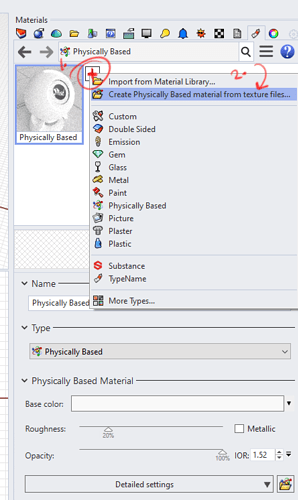 Thanks Kyle for the cool info. Will try it soon

We just added the ability to edit the Adobe Substance material in Rhino 7 with a version 2 of substance support:

We now have a version 2 update to Adobe Substance Materials support in Rhino. Now material can be imported and then edited within Rhino’s material panel. See the video below for details: [Substance Importer Plugin (V2) within Rhinoceros 7.0]

@nathanletwory
I don’t know if this helps your diagnosis on this, but I have found that these same materials sometimes fail when applied in Raytracing mode, but will work if I go back to Rendered and then restart Raytraced.