Rhino 6 - FilletEdge is rather buggy

If the FilletEdge is trying to make several fillets, and they are big, and their handles are linked, the FilletEdge fails - it makes very bad fillets. If the handles/fillets are big and not linked, they do not fail.

If the solid has several fillets and they were made in sequence (not at the same time), the Edit option of the FilletEdge command changes the last fillet only. There is no way to change the remaining fillets.

The Edit option of the FilletEdge command can change fillet radius and it can replace a blend and a chamfer with a fillet. The Edit option automatically selects all fillets (edges) and asks the user to left-click a fillet/edge to be changed. This is confusing because left-clicking the fillet/edge de-selects it.

I made fillets on both edges of a truncated cone before using the FilletEdge Edit and setting SetAll to zero. Rhino worked hard, displayed error message (Failure in trimming input.) and removed flat surfaces from the truncated cone.

Most of these bugs are still present in Rhino 6.3.

Same Bugs here! If you copy back to Rhino 5 - everything works better.
Some problems with BlendSrf as well. Edges are not selected like in RH5 - Blends do sometimes not work at all, but working in Rhino 5 SR14.

Most of these bugs are still present in Rhino 6.4.

FilletEdge is more robust in Rhino 6.5.

Complete failures are rare. Flaws in the fillets are common. Other flaws (mentioned in the first post of this thread) have not been fixed. 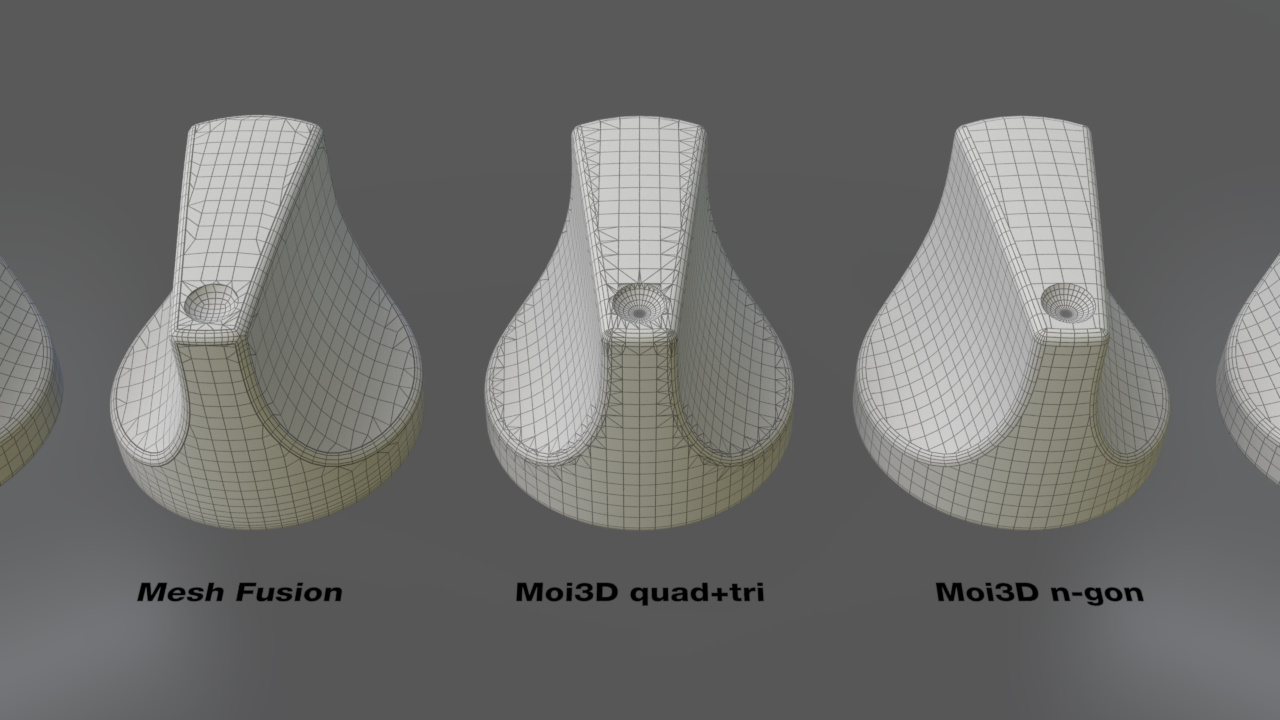 You posted screenshots of a triangle/quad mesh, comparing it to?
Could you post a picture of the failed fillets.

If need be, you could back up the object into a layer between each round of filleting.

Though, it seem to work–even with 0.00001 mm tolerances, and even with a rather severely large fillet, which I just tossed on it–irrespective of fillet type.

I made an mesh version from the Nurbs object, and adjusted the meshing settings for a similar appearance.

I didn’t put the dimple in it, but as long as there’s room between the edges, it should work fine.

The problem with triangle/quad based modelers is: what if you need a closeup. The quad mesh you posted a screenshot would work well for an actual-sized rendering at arms distance, but what if you need to get closer?

“Minimum edge length” set to something between 0,3-0,5 will result into a vastly reduced polygon count while keeping the mesh faces at relatively even size. Also, for such geometry “Maximum angle” and “Maximum aspect ratio” could be turned off, while “Maximum distance, edge to surface” set to anything between 0,1-0,2 will give more precise results.

In my opinion, the controls to get a good mesh are not accessible to everyone, you have to do several tests and are a little complicated; it would serve something simpler and more immediate; The Rhino 7 mesher will certainly be better than the current one, but if it were to be worse than Moi, for example, then it would be a small failure for Rhino, considering that Moi costs very little and does (almost) the same things as Rhino!

@B Design, yes, I was just going for a square’ish mesh. It was a 5 minute thing.

My point was that the part could be filleted, and a decent mesh could be made from a Rhino polysurface.

@davide76, those where the meshing controls in Rhino, not the simplified ones, but those were in there since (at least) Rhino 4.

There are many meshing processes, both surface and filled. Often there is not one best type for all. I have exported completely different surface meshes for finite element, than 3D printing, from rendering.

There’s an apples and orange thing here. A user can make objects that are CAD/design/mathmatically accurate for production/manufacture in Rhino3D, that can be remeshed at will for varying export purposes. That is its strength. Rhino’s weakness might be character design, where a polygon-based modeler might be much quicker to use because the user would have to think of a face as a series of surface, instead of a blob of clay. Though I am sure there are exceptions. Before I bought Rhino3D, I once designed a guitar only in Inkscape.