Nope - we didn’t know about this. Do you get a RhinoCrashDump.dmp file on you desktop when it crashes?

No Andy I didn’ see any dump file on the desktop. Thanks , Mark

What are the steps to reproduce it? Thanks.

Hi Lars, For me it doesn’t take much. Make a box from solids. Display in render mode in perspective viewport.go to snapshots .Save as Box. Program closes. That simple.At least on my end. — Mark

There was something that was supposed to have been fixed but this might be something totally different, of course. At any rate, I suppose you could always try this:

Attempting to save a Snapshot crashes Rhino Serengeti (Rhino WIP)

Could you try the following: Disable the RDK_EtoUI plugin. From the menu: Tools->Options and then under the Plug-ins panel. Restart Rhino Does it still crash when you save a snapshot? Could you send me your system information, please. In Rhino run the _SystemInfo command. Thanks. Lars

Andy is working on it. Thanks,Mark

We added a fix for the Snapshots Save dialog, but we are unable to reproduce the problem so could you test it once more with the latest Beta released (Rhino BETA 12-Dec-2017 Available).

If it works, then could you make one more test and run the TestSnapshotsShowIcon command and open once more the Snapshots save dialog to see if it crashes.

Did the fix solve the problem? I am just really interested to know and especially interested if the crash is there after runnig the TestSnapshotsShowIcon command.

Great to hear it works. The problem has been the icon of the dialog that seems to crash on a select set of computers. It has been hard to figure out what the problem is as we where unable to reproduce the problem.

Currently when using the dialog the icon looks like below. This is working. 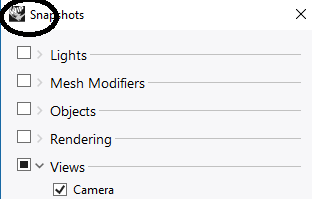 If your run the TestSnapshotsShowIcon and open the dialog, then it will change. Hopefully it will not crash.

I would be really interested to know if the dialog works also after the TestSnapshotsShowIcon command.

Max, I have ran TestSnapshotsShowIcon . It does nothing abnormal on the computer I use. Thanks ,Mark