Make2d in rhino 6 wip is not working as used to be in rhino 5, usually missing objects, lines etc.

Is it still in development? And for now it is better to stick with rhino 5 maked2D?

Is it still in development?

Yes. But only if you send in bugs.

And for now it is better to stick with rhino 5 maked2D?

No. You need to test Make2D in the RH6 WIP and post files (3dm) that show problems so that this can get fixed.

Here is the comparison and file attached, same for perspective. Maybe I am doing something wrong but rhino6 wip miss edges from polysurfaces. Rhino 5 does not respond to meshes, but result is better.

It looks like RH6 classifies the messing edges as hidden lines. So - as a work-around for now - you can get these calculated in the WIP if you turn on Hidden lines.

@GregArden, I take it this is a bug?

Turning on hidden lines will show interior lines. Even they are grey, black ones are incorrect too. Look at 3d.

Yes, that’s what hidden lines are

I just wanted to give you the possibility - as a work-around - to work with the current output of the command. You will have to pick the curves that you need manually and discard the rest. Depending on the scene, that may or may not be faster than either drawing the missing lines manually or using RH5 and fixing missing curves from that output.

Hi Petras - the objects are very far from the origin - if you move them to the world origin, Make2d can get the classification better but I see that is still makes some hidden/visible mistakes.

Petras,
I have been looking at your model.

The origin of the coordinate system is 1.2 km = 1.2 million mm from the model. So now you have used another digit to locate the model in the chosen coordinate system. Next the Tolerance is .001 mm so you requiring another 3 digits to get to the tolerance level. For a total of 9 digits of required accuracy. This is too tight. Just by changing the tolerance to .1 you get a much better result from Make2d 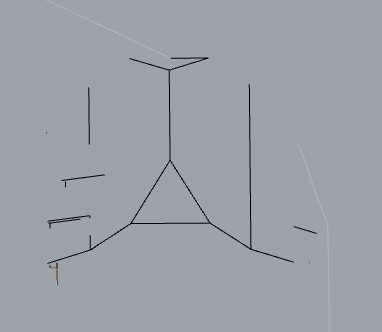 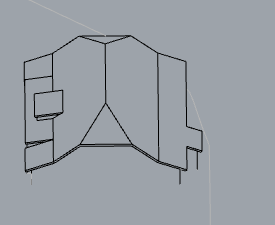 If Make2D could detect and draw the intersection of objects this would help a lot. Models would not have to be as accurate. But for now accurate models get drawn nicer than sloppy models

Thank you. This is a good explanation about tolerance and precision numbers.

When changing rhino origin to model average point (not moving the model), would it work too?

When changing rhino origin to model average point (not moving the model), would it work too?

You cannot change the location of Rhino’s origin. Not sure if that’s what you are asking, though…

The World coordinate system origin location relative to the model is what is important for how Rhino does the internal calculations. The model and World origin can be brought together using the Move command and selecting the model. Just setting the CPlane coordinates origin to the model average point will not affect how Rhino does the internal calculations.