could the text break to the new line automatically at the boarder of the panel? typing longer Macros makes them unreadable like that.

in Rhino 5 it still works. 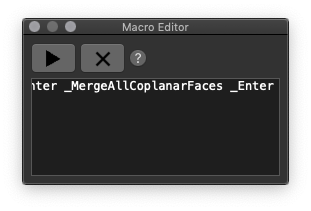 I’m not sure about this one. The MacroEditor is cross-platform code.

@dale what do you think?

Adding word wrap would make it difficult to type up multi-line macros, in my opinion. But fee free to YT this if you want.

Adding word wrap would make it difficult to type up multi-line macros, in my opinion.

hi dale, why would that make it more difficult than any other text whatever editor to write multi-line whatevers?

i would say this is a regression, having to pull the macro editor a mile over the screen does not make much sense.

or did i use the wrong wording? maybe its not line wrap i looked that up having no clue how to name it honestly, but whatever causes the text to keep flowing further in the boundary of the existing window when it reaches the boundary. like this the macro editor is unusable for longer macros.

I just put hard returns in there…

I just put hard returns in there…

Exactly… I just find this is easier to read and understand

funny,
there
is
something
in
this
kind
of
typing
that
seems
to
be
a
bit
counter-
intuitive
to
me

i also dont have macros containing that many commands, and hitting enter multiple times every time i write a quick macro feels like driving over cobble stones.

its ok when you guys like to hit enter that often, it certainly will not kill me either, still in rhino 5 that comfort zone was established and has been regressed now.

whatever anybody decides to do with this info.

Doesn’t wrap in Windows Rhino either… 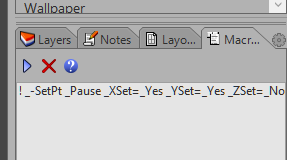 Adding word wrap would make it difficult to type up multi-line macros, in my opinion. But fee free to YT this if you want.

That was my take as well.

so what is the outcome, will it stay then that way?

i was thinking up an idea, since using colours are pretty handy in coding, why not implementing them into the Macro Editor. To start up easy, wrapped text could be greyed for instance. then it is easy to distinguish the wrapped vs the hard enter.

Doesn’t wrap in Windows Rhino either…

it does in Rhino 5 for Mac…

so what is the outcome, will it stay then that way?

For the time being, I would say it will stay the way it is.