Hello!
It’s finally possible to drag&drop layers in the new layer panel to some other position, instead of using those little arrows. Found some glitches though:

thanks for reporting.
I could repeat all bugs, but the duplicate layers bug is more difficult to reproduce, still looking if I can find a pattern. It seems more like a ghost copy though and not a real duplicate: 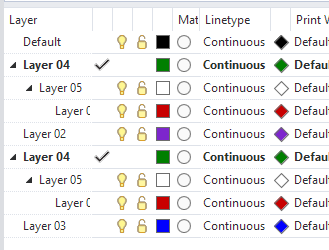 It’s not possible to drag a sublayer on top of it’s parent layer.

It’s not possible to drag under the bottommost layer.

@Eugen I could succesfully repeat the duplicate layer bug. If you make a parent layer with child and grandchild, and then drag a child back to root, then move this new parent/child, it duplicates: 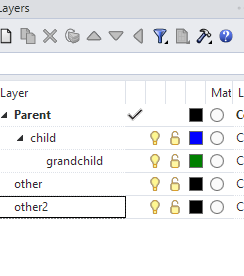 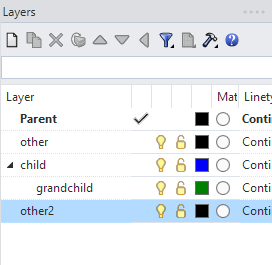 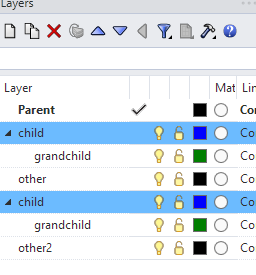 Ok! I too found a pattern, quite simple:
Make a layer child to another. Move it back out, so that it’s no child anymore. Make it again child of the same layer as before - it duplicates.

Both duplicates are the same layer, not two with the same name.

I see, makes for interesting games: who’s the real parent: 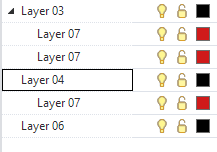 In today’s episode of “who is the real parent!?”
We have got Layer 03 and Layer 04 who both claim to be the parent of child Layer 07. But there can only be one, let’s find out!

Just use the records from the cloning facility at McNeel

When dragging the column headers vertically, the same separator line kicks in like when dragging a layer.

Doesn’t make sense, does it.
I noticed during column resizing in the header, which then does not work anymore the moment the cursor is moved out of the header row vertically.