Similar issue to the linked posts, in rhino and print preview everything looks normal 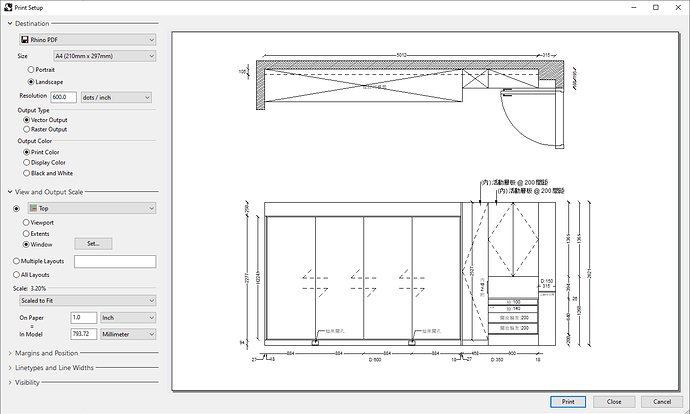 image1414×850 37 KB
But after printing, all non-english text gets removed, it’s not even leaving blanks or something like that:

If I use raster printing then it’s fine, only in vector printing

Hello. I would like to report a small bug. I realized I can put Unicode symbols in annotations. And it appears that if I choose a Font that does not have the symbol, Rhino will still render it in the viewport with some sort of substitute. However, when being printed to PDF in Vector Output Mode, these substituted symbols are no long substituted. This causes some confusion as if those symbols would disappear in Vector Output Mode and not Raster. Attached is a file with some examples of differ…

I noticed that some characters disappear from the text when printing to Rhino PDF. (Rhino7.18, Windows 10) Is this a known issue? Is there any way ( via RhinoCommon?) to check if some of my showing characters will not print? see Image: [image] I prefer to use the Rhino built-in pdf printer since it can be nicely scripted. try it: ⌀ U8960 DIAMETER SIGN ∅ U8709 EMPTY SET Ø U216 LATIN CAPITAL LETTER O WITH STROKE ⵁ U11585 TIFINAGH LETTER BERBER ACADEMY YAH

Similar issue to the linked posts, […]

As a workaround change the font to one that supports all needed glyphs directly. To find such a font i used this tool: Character Identifier tool – Keyman Blog