It’s been a minute since the latest update to this tool, and it’s been bugging me that it doesn’t uperate the “old” way, which was to automatically choose and set the Cplane Z for the default analysis. Instead, World Z is the default.

I’m not getting command line options with -DraftAngleAnalysis, so setting up a macro has been a no-go. How can I make this work? 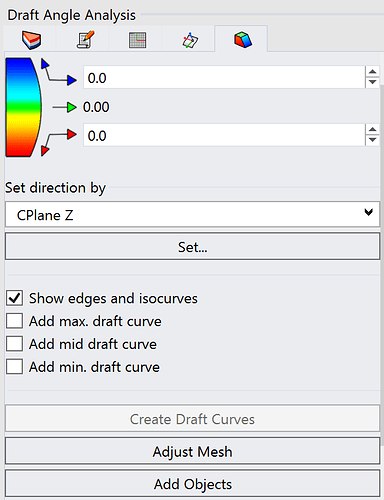 Hello- I don’t see why not, I guess… though since it is a panel and not a command that runs every time you want it (i.e. picking a new Cplane to work from every time) , it seems that no matter what, you’ll need the ‘Set’ operation fairly often. Once set to CPlane, it ought to stay there in a session - is that working for you?

It is. I’d like to be able to invoke the current Cplane each time I pull up the panel, if possible.

Imagine, if you will, a molded product with up to a half a dozen different pull directions. If I could use named CPlanes to set draft analysis directions from a macro, then I could use one click to analyze the draft in any of those directions. That’s what I’m really asking for here, I’m not being grouchy about the new panel costing me a couple of clicks per session. 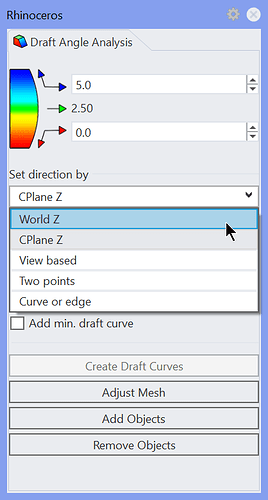 It seems petty when you put it that way.

I realize that most people, ideally, have a single pull plane and only set this panel once per session.
How do others deal with multiple pull planes in a model? I use Named Cplanes, that seems the most obvious to me. From a UI perspective, it seems like adding a Named Cplanes button on the drop down would make sense.

Idk maybe it’s because I model in a single window, but the Set button doesn’t make a lot of sense to me in most cases. Either the drop-down choice should auto-complete, or just send you to what you need to do to set the pull direction. Set is implied by using the drop-down. I’ve been training colleagues lately, and they always want to choose a selection and then don’t set the pull and so they don’t ge the draft correct.

Set does make a lot of sense for View based pull direction, which is actually great and very cool, but again it asks me to click on my single view so that’s a bit clunky imo.

I was not trying to make it petty at all - that is a lot of clicks if you are doing it repeatedly, I just wanted to make sure I undertstand the current workflow in order to write something up to fix it if possible. My comment about extending the dropdown menu with named cplanes was incase that is somehow more doable in the short term for the developer, compared to making the whole thing macro-able, which may be hard - I don’t know that for sure…

I know - it made me feel petty, though. Like I’ve already spent more time complaining than I ever will clicking with this one. I do think the tool has some room for improvement, and I appreciate your atttention.

Extending the drop-down with named cplanes would totally do it for me.

The developer thinks, at the moment at least, that making this command macroable is quite do-able, I’ll make a bug report for him so it gets on the pile.

I also miss V6’s _DraftAngleAnalysis behavior where the active view’s CPlane Z is automatically used as the pulling direction when the command is started. One way to bring this back would be to add CPlane Z of Active View to the Set direction by dropdown.

@spb I’ll add the CPlane Z of Active View and make the Set button update it. I’m not sure how confusing that will make the View Based option which requires that you pick the view but we’ll get it figured out so that the workflow of changing is less clicky.

I’ve added a few more options. I’ll need more time to get the command line macos working but this past round of changes that @pascal and I worked on this week should greatly help your productivity with the tool.

This is much improved, thanks so much.