Hi guys, I got a both a DWG and a dxf that Rhino skipps the 24 elements in the files, what is causing this?
Have Autocad 2018 some new entities that Rhino can not read?

So… when I try to read this file into Revit then I get this message:

Some ACIS objects could not be imported. To import them, use AutoCAD to convert them into polymesh objects and reimport.

I guess that means that there are some new object types that aren’t supported by Rhino yet, but will Rhino support this stuff in the future?

Bumping this thread, @pascal can you take a look to see what causes Rhino to not read any of the objects?

That file contains “special” objects that were not created in a way that normal AutoCAD can open them.
Here’s the message I get when I open the DWG in AutoCAD 2018: 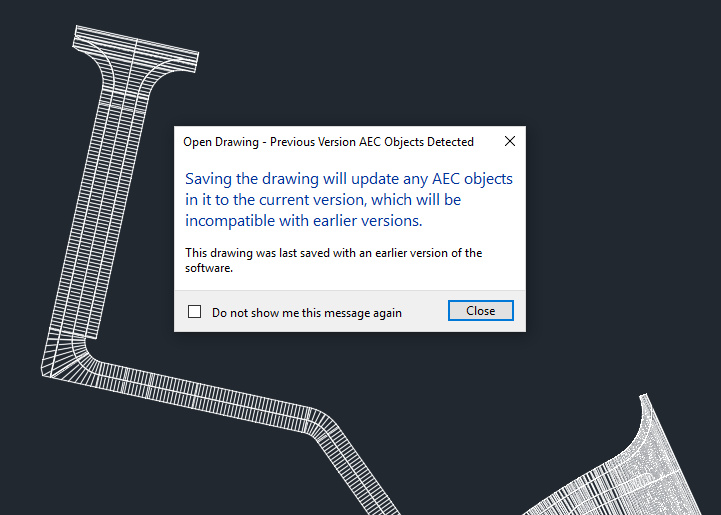 Rhino has never been able to import these proprietary object types.

JB, I thought we gave a more explicit/helpful message for these types of objects…?

I do recall there being a general warning message about not supporting “proxy objects” and something about these special objects created in the “Flavored” AutoCADs like AEC, Mechanical Desktop, and their Civil tools.
I haven’t seen that for a while. I don’t even know if Autodesk still makes those old “flavored” AutoCADs. They were a huge mess for anyone that needed to share data with other people.

Ok, thanks, but I installed AutoCad 2018 and chose them and converted them to Surfaces (Autocad recogniced them as mesh, but didn’t show them as rendered). So yeah, probably not a default geometry then.

Thanks for looking into it!