Is there a UI Fix for High Resolution Screens for Rhino on Mac OS?

the issue is that i have bought a non native 4K Screen for Mac Os, which Apple unfortunately is too lazy or too selfish to substitute properly as a hand full of properly informed people may know. Apple scales the UI down by half after first scaling it to 5k which drops the performance significantly when scaled to something normal looking.

other solution is to use a non native low res which blurs everything slightly or to use the native 4k resolution with super mini UI everywhere. i could live with this last solution if i would find a way to scale up the applications itself so far i am not having much luck. Rhino allows me to scale up the icons at least, is there anything for the rest of the UI like for the Text? or do i have to sell my Monitor again and do Apple a favour buying a terribly expensive Studio display?

Apple why do you make sure to make everything so difficult…

I just moved this to the Mac Hardware category.
Hopefully it will be seen by someone that can help.

thanks @John_Brock but i strongly believe it is not a hardware issue, the hardware is good, just the software support or lets say the lack thereof from apples side is what causes this inconvenience or better said problem and in this case hoping for a possible fix from Rhinos side @stevebaer is there anything on Rhino fo Mac to scale the UI Text? i already went through the advanced settings with no result so far

I don’t believe such settings exist in Mac Rhino.
Apple and the macOS is supposed to manage all of that.

Maybe there is something in System Preferences?
I do not use external monitors on my Macs.

unfortunately not, finding a solution for each app is my only hope for now, this or i have to return this screen and invest heavily into a 5k from apple. or apple spontaneously decides to implement a resolution independent scaling of the OS UI as there is one for windows as it seems.

Yes, in Windows, that sort of thing is left up to the hardware makers to work with the application developers.

You pay extra to not have to deal with that with Apple, but you have to buy their stuff,.

But you know all that.

is there anything on Rhino fo Mac to scale the UI Text?

No; JB is correct in that Rhino relies on the OS to tell us what text to use for UI. Windows provides a % scale for UI that affects text; I don’t know if macOS has anything similar.

yes…but… can you guys do something in specific to change the ui or will that just cause the ui to fail completely if not entirely reworked? is there anything dynamic or possible to be made dynamic like the icons currently are?

this is an issue many people are not even aware of, which very well means that a part of the people complaining about the perfomance of macs, and in this case specifically also about Rhino, that a non native screen or non 5k screen which falls into the range of apples convenience resolution (which are really not that many in the high res) causes a significant performance drop as elaborated a bit more above.

below a schematic which lists a few screens to show what i mean. 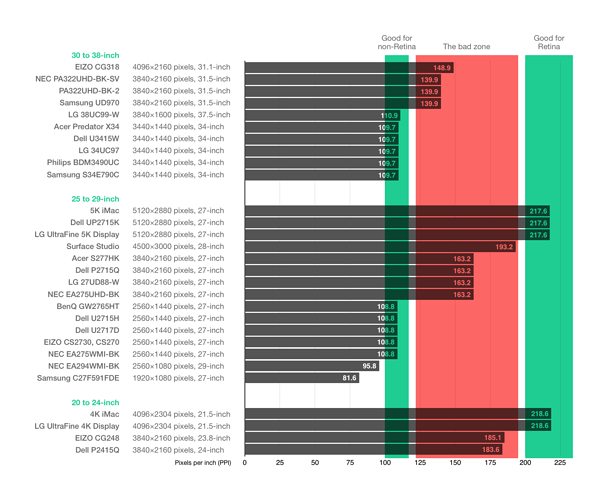 most of the non apple 4k screens including mine (not listed) fall into the bad zone meaning my computer gets almost a heart attack, simple tasks in any app are not smooth anymore. first i thought it is just my computer which is not strong enough but then i found out the truth about apples lazy scaling system.

so people wanting to buy a high res screen would have to unriddle all that and get one of the very few available options, or get a low res (low ppi) which falls into the convenience resolution.

the whole thing now relies on software developers recognising this issue and maybe hopefully are willing to help. this or as said above apple decides to use an independent scaling themselves which people are hoping for for a while but the issue is not known enough that even people hoping is rare let alone apple caring/willing enough to counteract.

i mean when i look that schematics i would say the issue is of an utmost imminent importance and no other option in sight.

We can modify Rhino to accommodate the adjustment of text size throughout the application, but it will take several months of effort for a developer that could be working on other projects. The likelihood that this will be worked on in Rhino 8 is very low.

yes i understand, i was hoping there might have been or could be a quick (test)hack for it. or that it might be actually little effort to provide something in a few moments. but even if it takes more time i think it is important to investigate if that could be targeted. again not many people know that issue currently, maybe they all have money and buy all the expensive apple stuff or they are just not buying any 4k or they just dont notice the perfomance drop or lets say what they are actually not having.

i managed to install some third party app which allows me to increase font size to some part. but its not enough…

here you see that the title bar and the command suggestions are being targeted by this software (tinker tool in that case) but it gets cramped when the command bar is in the sidepanel. the surrounding field does not adjust. 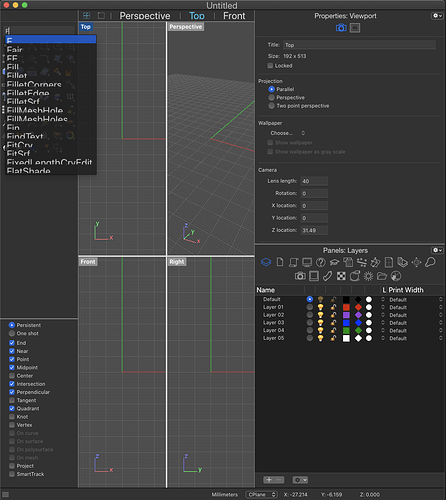 when i float the commandbar it gets usable but all the panels stay unaffected here you can see how small these are compared to something more usable from the commandbar. from a regular distance away the sidepanels are unreadable if i do not focus heavily which gives me a headache after a while. 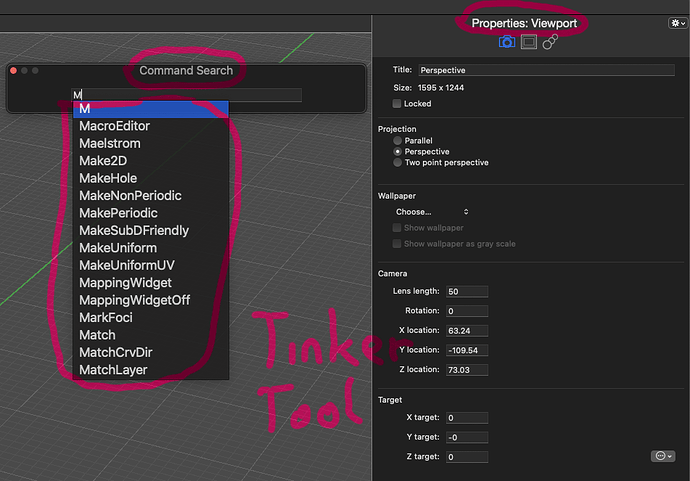 also the view tabs (or however you would call them) are targeted it cramps the space a bit but if i just increase it a little it is kind of ok, not so the other floating panels and the menu bar of course.

you might not see the difference a lot on those screenshots, but it already helps to read it since its a 4 k screen and my eyes still good that is pretty workable. the rest not so much. 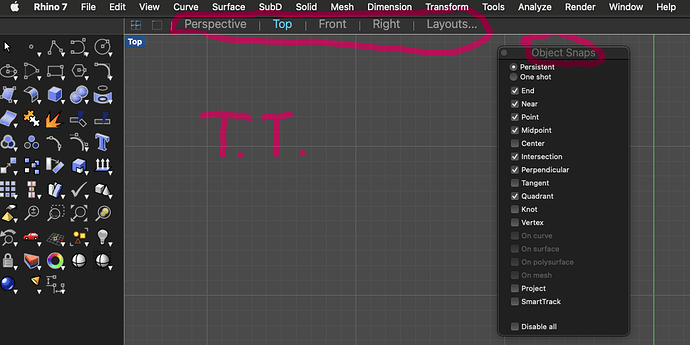 in other apps there is a UI setting which lets you increase the font for the entire application
here compared to Rhino’s floating o snaps from C4D. 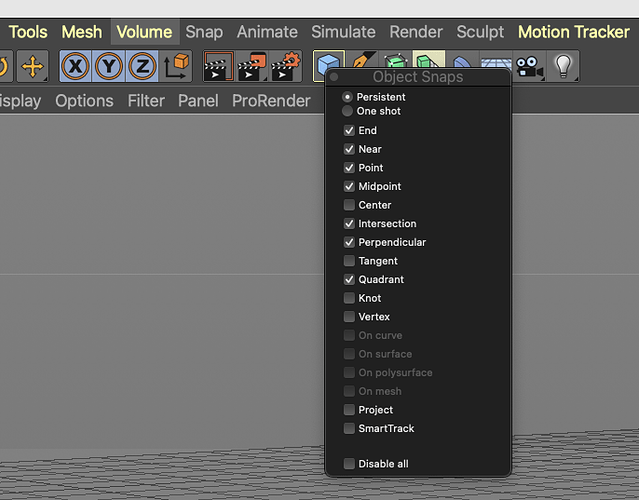 just one little setting and my life would be saved. right now Rhino unfortunately is not the only problem, also with Adobe apps i have the same issue, though there would be one setting but that does not take effect… nevertheless the issue remains unless you guys have a quick priority/feasibility check i might have to consider dropping my screen or dropping mac… wonderful

edit:
just to give you a real relation since my screen shots appear much bigger than my actual situation, the word Vertex is quite about exactly 5mm wide when i sit a normal distance away from the screen i can barely read it at all.

@stevebaer to bother you once more with this topic and to underline the importance of it, i just found out that Indesign has recently added this function either, quoting:

You can now configure UI scaling preferences in InDesign to uniformly scale the user interface based on your screen resolution.

illustrator already worked that way before. there are still some apps missing but its not hopeless,
basically only Photoshop and Rhino left which are my main apps which for me personally is unfortunate enough, meaning if there is no solution i might have to exhaust my bank account or drop mac.

can you maybe talk this over with your people? i am happy to help anyhow i can. i might have to make a decision early of course, but for others that remains important i think.

We’re not going to be doing this anytime soon, sorry. There are many other existing projects that are already in progress and take precedence.

We’re not going to be doing this anytime soon, sorry.

hi Steve, i have been thinking about this issue pretty intensively recently again, since i still have no real solution. i sold that monitor in the meantime but an ongoing discussion in the last few entries here have almost lead me to believe that it might be ok again with new (stronger) hardware arising, which most certainly is still not the case at least not without gaining performance- and energy losses.

since i have found a dedicated wikipedia entry which i seem to have missed before talking about the general idea and also problem regarding scaling → Resolution Independence claiming that for mac that simply is non existent, though there were some attempts in early days, while apple has decided just to trick the issue for now 10 year by simply staying within a specified resolution…

so my question would be to bother you once more with this topic, do you think that could be made a dedicated and at least in future a serious target at all?