How would you go about making this shape?

I have attached a file that someone made in a different program. I would like to make something similar in Rhino, what is the best way to make this shape? Thank you.
-Daniel
Shape.3dm (930.5 KB)

Anyway, it’s almost a square tube. Because of its organic shape, I see node editing in your future.

To start it, I would make some cross-sections from the example, simplify them, create a curve/spline for the center of them all, and then sweep 1 rail. Then, if you can either add some knots to add some nodes to get it most of the way. If the swept surface you create ends up being a ploy-surface, things will be harder.

Maybe Curve From 2 Views (Front & Right); just an Interp Crv trace down the center line of the object in each view, then some cross-sections curves and a sweep, a la @Brenda’s suggestion.

Before you made it, you could turn on record history, so you could play with it until it’s right.

@Brenda
That was actually the method I had been playing around with a little already. Here is what I have so far. It is not too far off from what I want, but the transitions between some of the sections are not flowing correctly and there are some bulges that I dont like. Maybe when I do the sweep rail my arranging the nodes with the arrows thing isnt correct. Also I made the top shape with a different method so maybe with a different number of nodes it is getting confused. Any advice on the next thing to look at to clean this up would be appreciated.

@dhall
I am not familiar with the command curve from 2 views, can you link me to where I can research that or explain? Also are you saying my rail should be in the center of my cross sections and not at the bottom as I have it?

Thanks for the help.

Just invoke Command Help and type Crv2View. The description and animation will be there to explain it all. @Brenda’s suggestion about History is perfect, too.

You might need a 2nd rail, so it doesn’t become twisted or skewed–even if it means you have to draw a control point curve at the midpoints, approximating what loft does. Loft also might work.

@Brenda @dhall
I was able to get pretty much what I was looking for with just taking out a few sections that I had in there and letting the program do some more interpolating. Check it out and let me know what you think.

First, I restored all 4 viewports and saw that the Front and Right views looked like appropriate views.

Crv2View requires 2 planar curves, drawn in 2 different viewports. I used an InterpCrv and just drew it by eye. Lots of other ways to do this, too, but by eye seemed like it would be acceptable for your purposes. 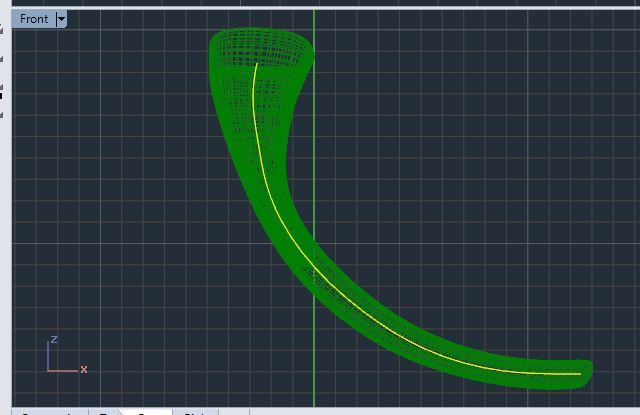 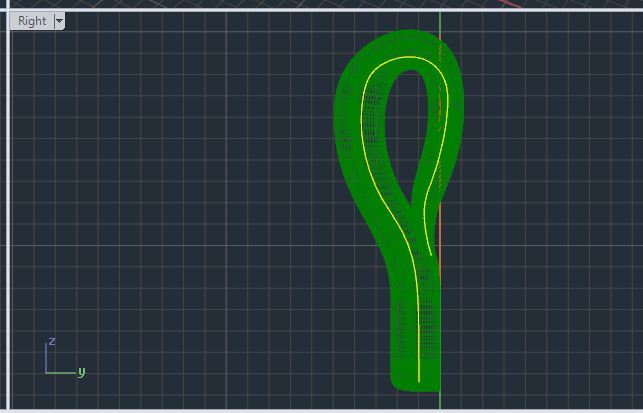 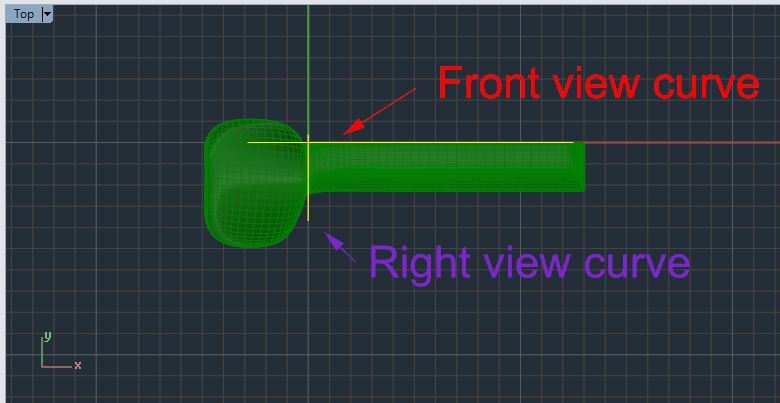 4 viewports (with the object hidden) shows the resulting curve (White layer) after Crv2View. Note the alignment of the white curve in the Front and Right viewports; it matches each view, yet ends up as a single, non-planar curve (Perspective view). Next view shows the same thing, with the addition of the object shown with the curves.

The tool works as if you’d extruded each of the first 2 curves, and then run the Intersect command to draw a curve where the 2 extrusions overlap. Very powerful tool for creating complex curves in space from relatively simple, planar inputs.

This doesn’t address anything about generating and placing profiles (which you seem to have well in hand), it’s simply a way to generate a complex core curve (rail) without too much anguish.

@dhall
Great explanation. Yeah I just took a curve and eyed it to be along the inside edge of the original shape. I had to use several views adjusting nodes trying to get it right in several directions. Your method is easier, more accurate and I can see how powerful it is. I will certainly keep this in mind for the future.