I am trying to replicate vase mode in Grasshopper but with a twist and I can’t get it working:

The Contour component produces planar “slices”, which are in this example called “base curves”. After rebuilding and moving some control points they are called “pattern curve”

My goal is to transform the “pattern curve” so it connects to the curve one layer above but doesn’t disrupt the pattern: 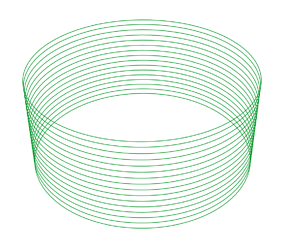 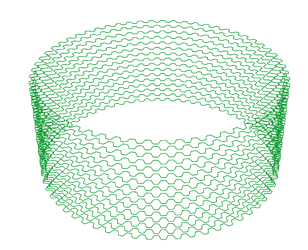 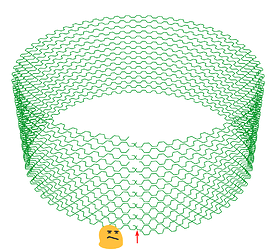 I’ve been trying for days now and everytime I hit some wall. Does someone have an idea? many thanks for any help!

thank you, that makes it more clear. Yes, exactly like helix - but the example I posted is very simplified. The shapes could be very irregular: 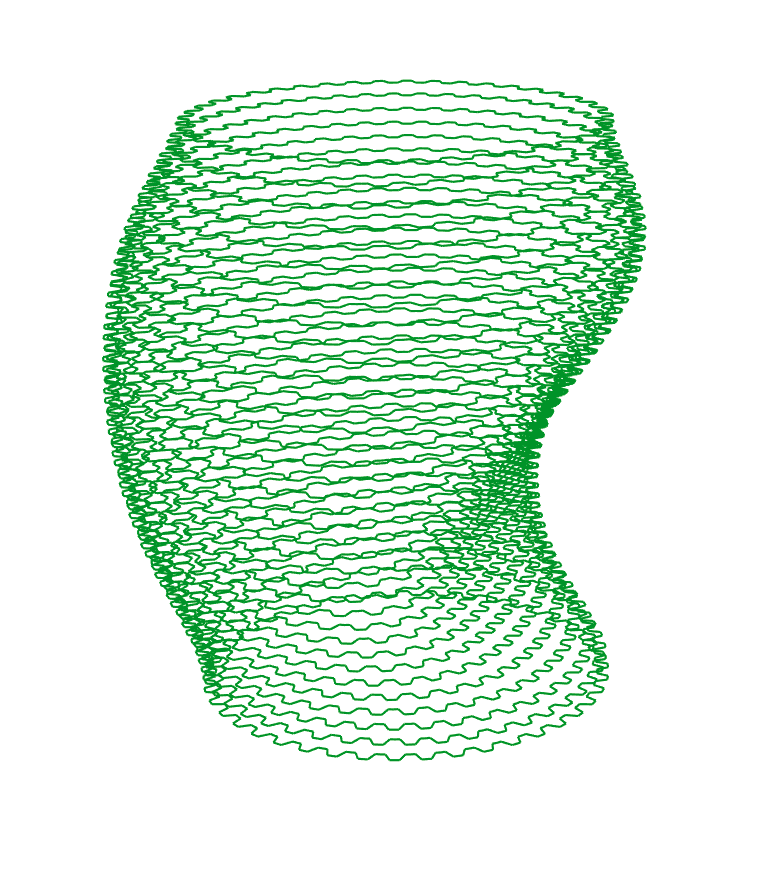 You can use the same script

Thanks! Though the pattern is more complex than just normal “zig zag”, I am afaid: I takes the previous layer into account and optimizes the position of the “zigs” and “zags” to keep a nice grid: 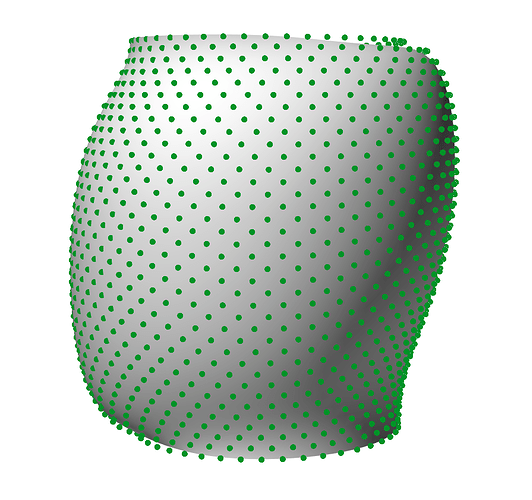 this I want to avoid: 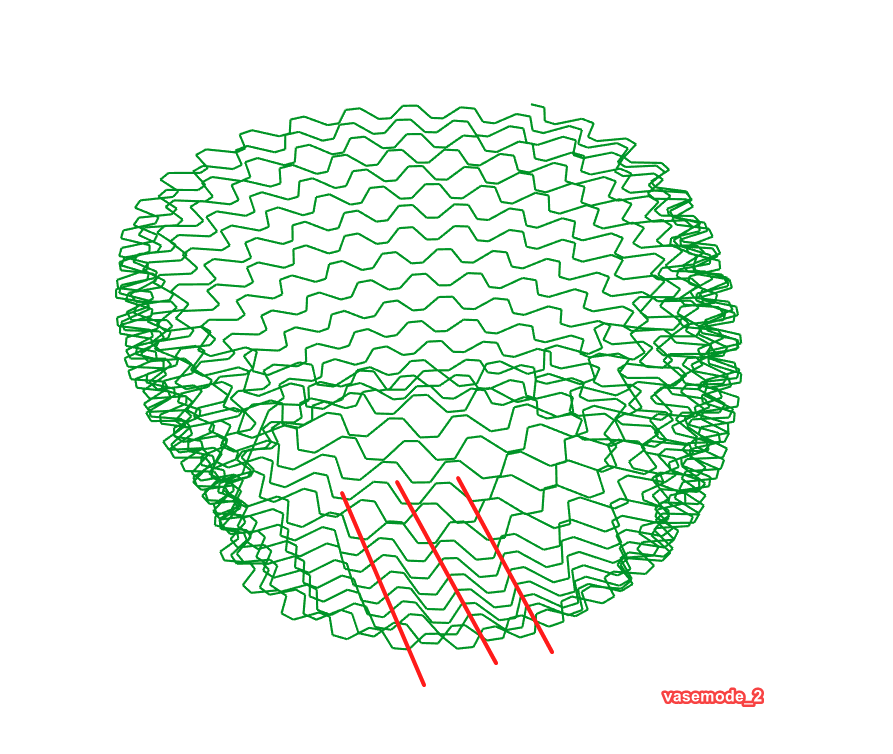 image893×754 47 KB
edit: if someone is interested I can post the definition, I will anyway but when it actually works

Are you trying to make a toolpath for the printer? Or do you want a surface of zero thickness you can run through a slicer program to create a toolpath?

actually I tried both but got frustrated with the slicer. You can import open meshes into cura as long as they can be sliced horizontally. Though cura does’t produce very good vase /spiral mode toolpaths, I am trying to make my own.

I know nothing about “vase mode” but it looks to me like one issue is that the seams are not aligned. I fixed that by moving the seam on all lines to the first point where they cross each other in top view.

The second issue is that alternate zig-zag curves are out of phase when spiraled. I wonder if it would work better to create a spiral from the circular “base curves” before implementing the zig-zag pattern?

I think you are right that aligning the seams is necessary. Thanks

… and yeah, the “out of phase” problem is driving me insane. It gets kinda tricky when you look at more complicated shapes, and when there are not the same amount of points in each layer: 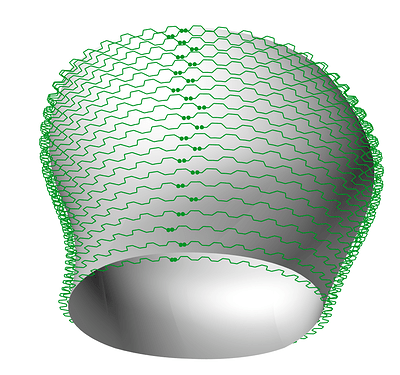 – or is this just shifting the same problem to the dot distribution part of the script?

Konrad: Maybe what you should do is create a single, continuous curve that has the shape you want, Pipe it, and print that.

Here’s what I got. Ignores your curves altogether and starts from scratch. Parameters adjusted to approximate your dimensions.

Applying this idea to an arbitrary shape is a different can of worms! What shape?

Maybe what you should do is create a single, continuous curve that has the shape you want, Pipe it, and print that.

thank you. the example I posted is very simplified and the curves could be very different than a straight cylinder. Have a look at post 3. and 5.

I saw them but there is no geometry posted. Image is useless.

The problem is that the dot pattern isn’t totaly regular but takes the last layer into account to optimize the distribution. Because of that dividing a spiral purely based on distance to the last point will result in “running” columns as seen here: 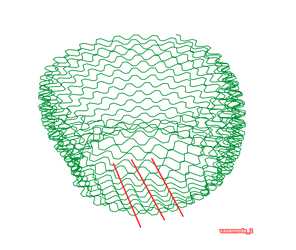 I want the vase surface please, not cross sections.

vaseMode_3.gh (278.7 KB)
if you are wondering, yes the curves are offset inwards. This is because the nozzle will add some thickness

The problem is that the dot pattern isn’t totaly regular but takes the last layer into account to optimize the distribution. Because of that dividing a spiral purely based on distance to the last point will result in “running” columns as seen here: 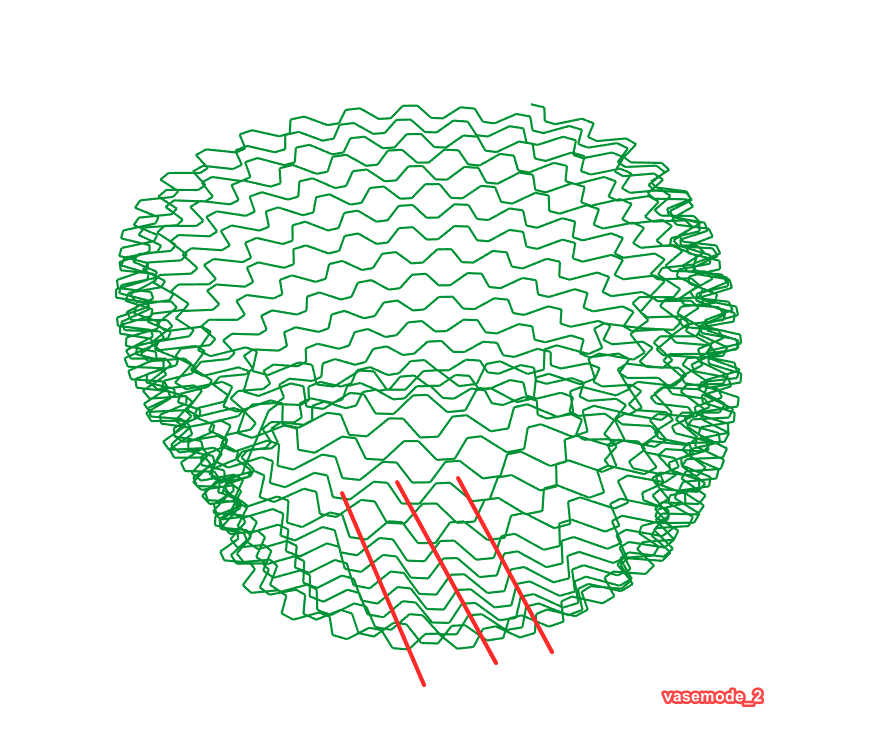 I ignored this part of your spec, at least for now… Sounds like a similar problem to laying bricks on conical surfaces?

Sounds like a similar problem to laying bricks on conical surfaces?

Yeah totally. It makes the helix part more difficult, since your zigs and zags are fixed on the surface.

In the simple shape like cylinder you can get this result but in irregular shape i don’t think you can.