Wish: Sketchup import should have option to assign group layers to geometry

In sketchup modelling practice is that all geometry rests on default layer and geometry is then grouped inside groups. Groups are then placed onto specific layer.

Thing is that when importing model into rhino from skp all geometry is placed on default layer and group layer (although skp layers are imported) is neglected because rhino does not have feature like “skp group” which can be given a layer.

I suggest adding option to skp import to allow placing geometry onto layers according to skp group layer. This would enable meaningul import from sketchup where geometry would retain its organization.

Is this big thing to ask ?

Do the Sketchup groups come in as Rhino groups? If so a script could be made to create a new layer for each group and transfer the objects to that.

my notion is that geometry in groups in sketchup comes as grouped geometry in rhino. i dont think script is possible because once imported in rhino geometry no longer knows which layer it used to belong to.

Since rhino does not have equivalent thing to sketchup groups (closest is block but only of one instance). Logical behaviour would be as i suggest that imported geometry would be placed on layers the original sketchup group belonged to. However I am not sure how nested groups should behave. Probably the first groups layer the geometry is put in would be determining its final layer resting place.

Logical behaviour would be as i suggest that imported geometry would be placed on layers the original sketchup group belonged to.

Looks like the first thing that should happen is that the importer can actually figure out what layers the groups are on and place them on those layers… Do SKP groups have a name? Do they survive the import into Rhino?

Do SKP groups have a name?

I believe sketchup groups may have names but usually dont. Basic organization is kept with layers sometimes called tags in sketchup. But definately they have some inner GUIDS.

Do they survive the import into Rhino?

I dont think they can survive because rhino has nothing matching groups. i think it does it groups objects whic are inside groups but groups in rhino are not entity which has property of layers because its just selection of geometry.

Yes thats what importer should optionally do: get info in which group geometry lays and then find which layer the group is on --> geometry in rhino ends up on those layers. 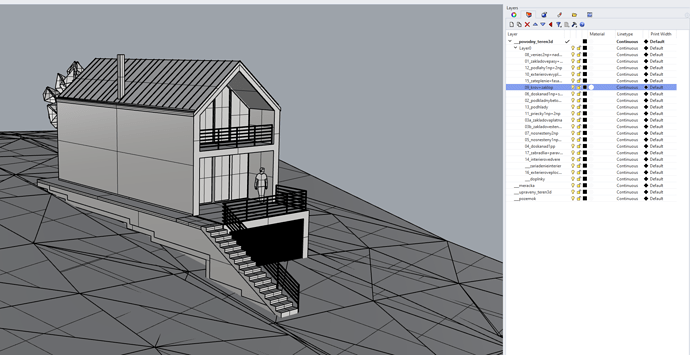 @pascal
Please can you submit this as a wish?

If I stick the geometry on the “group” layer from SketchUp (this will be a checkbox in options) do you want that geometry to still be included in the group in Rhino or just on the layer?

i think there should be two check boxes. one telling that grouped objects in skp will have geometry put in a layer in rhino according to the sketchup group layer (not according to geometry itself) and second checkboxes do you want that geometry to be grouped in rhino. something like this

Looks like your picture didn’t make it. At least I assume you were trying to include a picture when you said, “something like this”.

no no picture. just something like this i meant what i wrote above because i tried to describe the checkboxes but real description must be different and better

OK. So one checkbox to say, “Put the objects on the group layer, not the object layer” and another to say “Add the objects to groups”. Should the latter be greyed out if the former is unchecked?

this sounds much more concise. i would leave both options available all the time. sometimes you may want it grouped other times not.

OK. I added what I think you wanted. It’s in versions 8.0.21244.4305 (if you own 7, the 8 WIP is free to use while being developed) or greater at the moment. Please try it and see if it’s what you wanted. Also, it would be handy to have a very simple SU file, like the one in the YouTrack issue, only with nested groups with tags. It may not work right, at the moment, with nested stuff.

i will give it a thourough test