Hi - finding correct intersection events when dealing with tangent surfaces is difficult. I take it that this is the issue in your file. I’ve logged this example as something for the developer to look at - RH-56607.
For now, use WireCut on the cone before merging that with the ring.
-wim

As @wim says, it’s related to those tangent surfaces. I’ve had issues with this as well, but never bothered reporting it as a bug.

This doesn’t work with wirecut:

Hi @wim thanks. Yes that is the problem. I tried to cut the cone first with wire cut or cylinder (Boolean difference) and it works. But then I cannot do the Boolean union of the cut cone to the ring.
How should I solve it? This is a recurrent problem for
Jewellery modelling.

Hi @wim thanks. Yes that is the problem. I tried to cut the cone first with wire cut or cylinder (Boolean difference) and it works. But then I cannot do the Boolean union of the cut cone to the ring.
How should I solve it? This is a recurrent problem for
Jewellery modelling.
[/quote]

Thanks @siemen! Yes that is exactly the problem. I need to this most of the time inside of the ring shanks though. Sometimes
Works depending on the size of what I have at the top of the ring.

Thanks @wim and @siemen. I have seen the file how it can be resolved.

Rhino doesn’t like coincident surfaces at all. I always try to work with a gap or margin of intersection between surfaces/bodies
in this case, something like this:

Thanks! Yes, I know it does not like it :-)! I will make the rings slightly smaller and then use the wire cut of the right ring size, so that there is enough overlap.
Thanks
Again

Hei @siemen, thanks for that example. Based on the feedback by the developer in the ring case, this sounds like, deep down, is a somewhat different case and have reported that as RH-56628.
-wim

Hi @joanapcunha and @DiegoKrause, a developer had a first look at this example and concluded that the cause of failure is that the internal surface of the shank (selected in the following picture) is not a true cylinder but a cubic approximation of a cylinder. 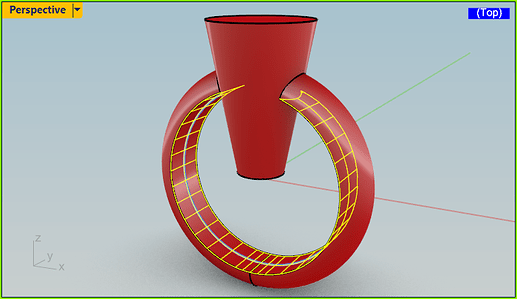 The cutting circle, when used by the WireCut command, creates a true cylinder and the intersector code doesn’t consider these two surfaces to coincide.

So, the problem isn’t coincident surfaces but that those surfaces aren’t identical enough to actually be considered to be coincident.

Practically, when you make such an object, you could create the shank with a round profile and then cut that with a cylinder. In this case, the WireCut will work as expected. 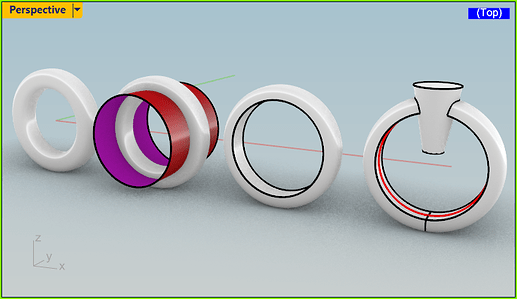 Thanks a lot @wim! This is very useful as I do it often in other jewellery shapes (and rings!).
Many thanks for your help!
Joana

@siemen, somehow I was able to reproduce that case here yesterday but I am no longer able to do so today. Do you have a file with which you can consistently reproduce that?
Thanks,
-wim

Euhm… That’s odd. I’ve just tried this again as well and cannot reproduce it anymore. I’ve seen this happen quite often that I changed my drawing style to not draw the overlapping lines. I also thought I included my .3dm file up here but apparently I forgot and deleted the file. I’ll try to post a file here when I come across it again.