What spec are you guys and gals running with win 10?

I am wondering what spec PC:-
*CPU make and details)
RAM total Gb on Motherboard, DDR3 or 4 or ? and Mhz. , make
Video card and RAM

As such after win 10 64bit pro installed to a new SSD, and the basics such as printer, scanner etc, after Photoshop CS6 went on I am down by 13% available ram.
I install Rhino V5 and get two progs, and a loss after reboot of 0.2Gb. if thats 0.1Gb per prog, then as I have 140 progs in total, some small fry, e.g. Treesize, FileSync, video utilities etc, as well as Photogrammetry, video editors, Rhino, Video authoring , Microsoft Office Pro, big progs in other words, just what my PC will be capable of. maths says 10.8Gb of ram left, but I am taking notes and experiemnting as I go. A simple search in my cataloging prog took 35% longer. Everything I do sees a blue ring appear for a few secs, win7 was instant, win10 is SLOW.

I am told it doesnt ignore installed progs unless they are running, but has to monitor everything and that eats up memory, so far that seems true. That can be disabled but its not easy I am told.

Win 10 is also rejecting any data drive plugged in, there is a fault it says, consider fixing it it asks, or incorrect Paarameters, on a whizzy drive partition when placed in a usb caddy, yet such worked fine on win7, but once win 10 says that, and leaves teeth marks in it, then win 7 also coughs them out, I chkdsk fix one ( a few months old WD My passport) and when plugged into win10 it says faulty again. How I get it to behave with decades of my files is worrying. 32tb in total.

My goal is to run Rhino V7 but win 10 seems to want to turn my PC into a piece of junk. I may be left floundering unable to run V7 after all this time.

It is suggested I do a PC rebuild, new MBd, CPU, RAM, Video card, even PSU. as I dont have £100 to spare, I am not sure how this is going to happen.PC was powerful up until win10 went on.

To know what your PC’s are would help.

PC was powerful up until win10 went on.

Your programs won’t take up much RAM unless they’re running, but these days most programs have some sort of constant “check for updates” or “helper” stuff running all the time. 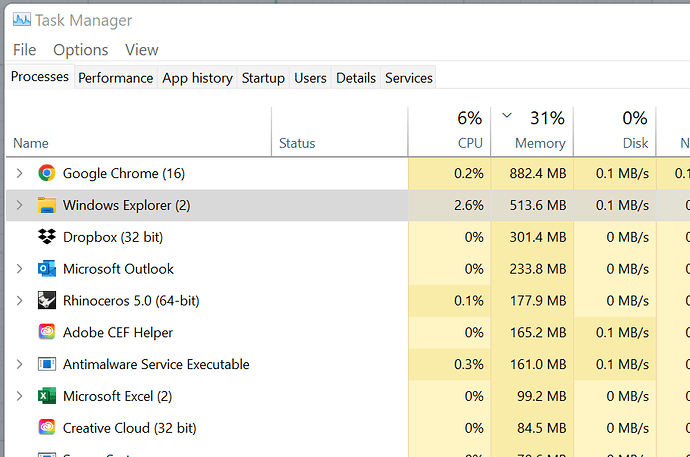 A simple search in my cataloging prog took 35% longer. Everything I do sees a blue ring appear for a few secs, win7 was instant, win10 is SLOW.

Win 10 broke a lot of search stuff, Win 11 is far worse… Do check your search indexing parameters though.

A few things to bear in mind.