Unable to Print to PDF

I’ve installed Rhino on a new workstation at my company and for some reason I can’t get it to give me an option to print to PDF.

Here’s what I’ve tried to troubleshoot the issue thus far:

The problem is that the drop down menu on the Print dialogue screen does not even have an option for PDF of any kind. I thought maybe there could be a way to add Acrobat as an option to the list but I’ve been unable to find a way.

I apologize if this seems like a really trivial issue. We PDF hundreds of drawings every week so I thought I would ask if anyone has a fix for this issue.

You need to install a PDF AUTHORING tool.
My favorites are PDF995 and BullZIP, but there are lots that work well and are inexpensive or free.
Stay AWAY from Adobe Acrobat authoring tools. In addition to being ridiculously expensive, they are very finicky about display drivers and as a result, crash a lot.

Windows 10 has one built in as well- 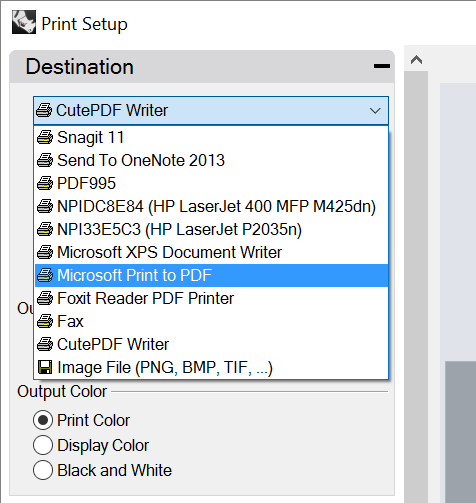 Windows 10 ships with a PDF printer driver that appears to work very well.

Can’t you create a custom size … and then type in the D-size numbers?

Can’t you create a custom size

He’s talking about the PDF writer that ships with Windows 10 - which works very well but is very limited in size options.

Apparently there’s a tweak - more info here in this thread: https://discourse.mcneel.com/t/adobe-pdf-vs-pdf995-vs-cutepdf/
(and specifically post # 14 there).

Thanks. Yes, that helped. I found a pdf writer that allows me to save Arch D size… but it does show ads. Not a huge deal. Thank you.

Thanks John. Yes Im using PDF995 and until the ads drive me the the edge of insanity, I’ll manage with them.

Since the two ad. “opportunities” never change, it’s easy to get into the click pattern.
I found the tool so useful and reliable, I’ve probably sent the $10 at least 5 different times for different computers.

John,
Like others, I’m having issues with the Adobe acrobat pdf printer in Rhino. Do you have any accumulated insights you can share about why this crashes Rhino so randomly? It works fine 8 times in a row then crashes. I’m unable to deduce a pattern to the fussiness. It just crashed while trying to print. I opened the same file and tried again and no crash, same settings.
I’ve really liked how smooth the Adobe engine is, compared to cutePDF. In the meantime, I’ll have to give your program suggestions a try…
-Robert

99% of the time, the Adobe PDF authoring tool crashes originate in the local display drivers.
Occasionally, a driver update will correct a problem and other times and new glitch shows up in the display drivers and Acrobat starts crashing again.

For me, the other authoring tools were so much more fault tolerant and less expensive, that Acrobat was not worth the price or the trouble.

I wouldn’t exactly agree with this. The Adobe PDF printer driver crashes typically occur when generating vector output which doesn’t use display drivers at all. I’ve never been able to pin down the exact cause of the crash, but I have had some users tell me that when they turn off the curve smoothing feature in Adobe’s PDF printer their crashes stop happening. I can’t really prove that to be the case though.

OK.
When I need good vector PDF output from Rhino, I use BullZip as my authoring tool.