Prueba Sage Gatehead 7.gh (40.3 KB)
Hey!
I’m new in Grasshopper and I’ve been trying to make a 3D structure with a surface I cut with some extrusions, but after trying several options when I try to use the comand ‘Triangle Panels C’ it only takes the base surface instead of the already cut one I did.
Please find attached the code file/script and I would be very grateful if someone could help me.

Here I put some photos and explanations in case is more helpful:
[Image1]. This is the surface I created in which I already cut the holes with the extrusions created:

So I tried other options:

[Image 4] Taking the base surface and [Image 5] after using the commands ‘isotrim’ ‘split brep multiple’ (already grafted the input) and ‘deconstruct brep’, then the result is similar of what I would like to have as a result, but it only removes the panels that are hal cut, but not the rest of them (the ones with I marked with some red crosses). And after trying different options, none of them worked. So I was wondering how could I remove those panels.

The problem is that even if I manage to do that, the glass panels still take the base surface [image 6]

So I tried another option based on the previous one:

[Image 7] I brep the surface and apparently it didn’t take the panels that I wanted to remove. [Image 8] Then ‘surface split’. [Image 9] But when using ‘isotrim’ the same problem appeared, it takes the base surface. 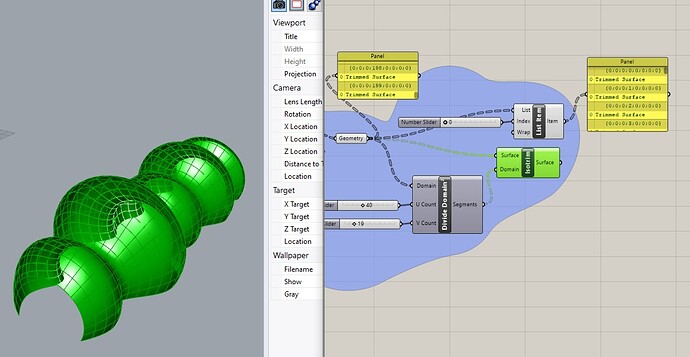 Even though I guess it is not the proper way to do it, I tried to connect it before the step of ‘isotrim’, but the glass panels take the whole as well.

Once again, thank you so much in advance.

This is one of the most recurrent questions regarding subdivisions with the trimmed surfaces. You can find tons of related topics here in this forum like the linked topic.

This is one of the most recurrent question regarding subdivision with trimmed or untrimmed surface. See the link bellow to understand the underlying theory. And I can show you one workaround way on this using Copy Trim and Surface Morph. http://docs.mcneel.com/rhino/5/help/en-us/seealso/sak_splittrim.htm http://docs.mcneel.com/rhino/5/help/en-us/index.htm#commands/untrim.htm [Canvas%20at%2014%3B01%3B24] SubdivisionTrimmedSurface_re.gh (33.0 KB)

I couldn’t be more grateful, it was super helpful. Once again thank you so much really.