Anyway to force text dots to stay the same size related to what they are attached to…?

No, sorry. Dots are designed to be the same size on the screen all of the time.

How about adding to R6 wish list…? Anything else similar that can be extracted along polysurface info…?

Hi, Brian,
What exactly is your goal? It would help to know what you are trying to achieve when thinking of a solution.

I need to label each polysurface with a “stone mark” (cut ticket number) that I can see on the screen and extract with the BOM script that Peter has written. Text dots give me this except when zoomed out very far they hide all my line work.

I’m using a few different scripts to make the process of producing cut tickets much easier.

See the topic “Finding copies” for one that Mitch wrote for me…That one finds all the like stone and I then use a script from the topic “Auto-name&numbering of objects” to give each of the like pieces a stone number followed by a count.

What might be an option, is to make all dots smaller: 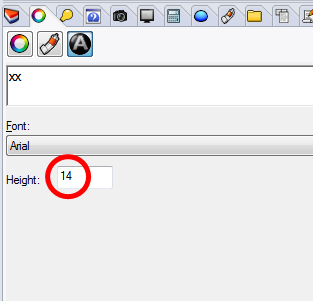 Any work on this in the past year…?

No… Text dots are screen based - why not use just Text here, rather than dots? You can convert with ConvertDots.

I’m now using the dots for different reasons than listed above…Still an aspect of Peters tools using them to display the weight of each stone. Best work around I have found so far is to just put the dots on their own layer and toggle it off and on as I need to see the weight of each piece. Convert to text orients the text to the ground plan instead of facing the view. It would be nice to set the text height of the dots but I understand it just doesn’t work that way.