Hi Guys! I have to do a rendering of an old town, so I made a script thats draws my roofs (arround 400-500). It partially works as it should. But there are a few problems which I dont understand. Basically I repoduce the process which is shown here: https://geometrie.uibk.ac.at/elearning/dachausmittlung/2_1_Dachausmittlung-3D/2_1_Dachausmittlung-3D.html My approach on that is, that im offseting only once and connect the corner points by an SDL line. If they are intersecting i make a 3-Point s…

Well Antonio if you want to do that with C# (BTW 1 to 10 what is your experience ?) … your first task is to master inwards (or outwards [holes]) the polyline offset puzzle. Hint: for a given Brep Face make inner Loops (holes) clockwise and outer Loops counterclockwise (Or the inverse). Finally you get stuff like this:

Then using some Methods from above it’s a matter of recursion (from a given node go back and forward etc etc). I can give you some hints on that matter after you have fixed the poly offset challenge:

What would be an approach for solid meshes?

Why to use meshes? (you mean joining the BrepFace [base] with the inner planar BrepFaces [loops/cirquits/whatever] - if some Z is provided)

Or you mean some “variant” of this?

no, about medial axis, of 3d solids.
I was searching for this issue. But it seems there is no simple example.
It did usually include implicit contraction of mesh vertices, or fitting circles to pointclouds which is slow.
And it is for me complex regarding geometry processing.

I do understand that there is no such thing as medial axis for 3d objects, it must go through some sort of abstraction in order to have polyline representation I was wondering if you know even a starting point for this: 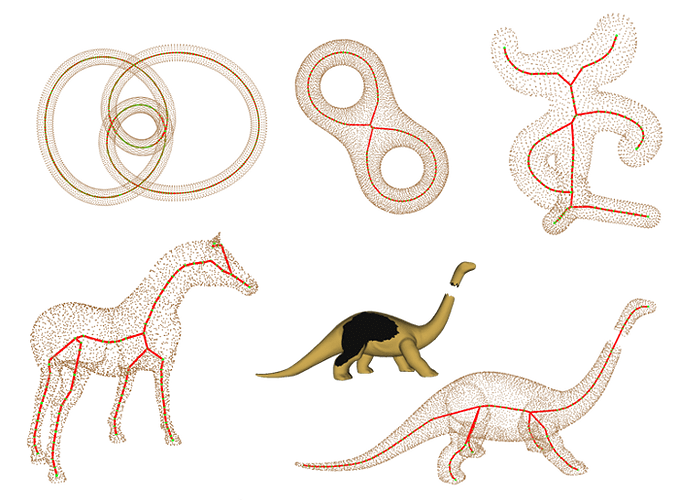 I also read that it is possible to approach this problem through voxels by gradually removing boundary voxels: 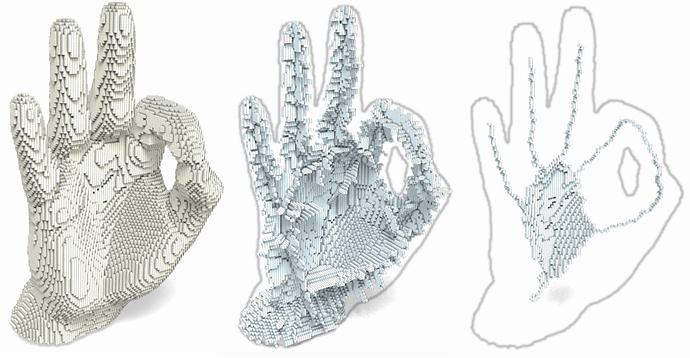 @PeterFotiadis I’m really curious how you get the polylines to offset into multiple curves once they become smaller. I’ve never found Offset to be very reliable and sensitive to where you pick the offsetpoint. I’ve tried the different Offset methods (both with and without a directional point) but offsetting always stops when it would run into multiple offsets.

Yep, maybe a 6 being 10 the dog, but recursion makes me want to die in a repeat it fashion. Yes clipper offset solves with collapse events, but I’m not sure if you can access them. Thanks

Unfortunatelly the C# that does this is internal (also the straight skeleton one) but I could post an indicative demo that gives you some hints for solving the puzzle.

@PeterFotiadis: interesting challenge, I’m not a programmer so please bear with me… This is what I came up with so far. While making the intersection points it seemed this is already starting to look like a skeleton as well. Still long way to go I guess?
vector_based_offset_01.gh (12.8 KB)

Well … for a start let’s forget inner loops (holes). Other than that indeed the path is long (and hilly).

Level 6 is OK for that thing (skeleton and offset and this and that). 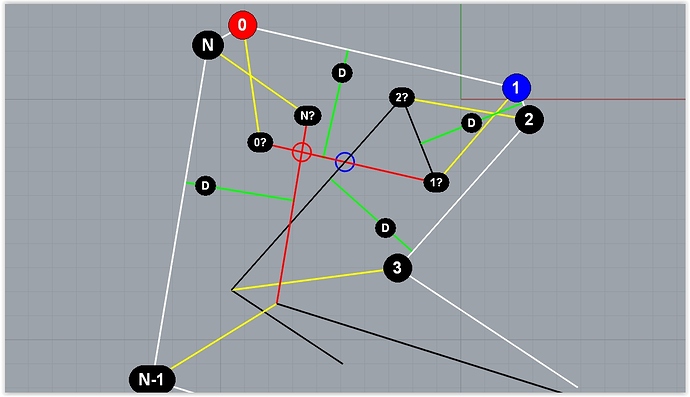 Next lesson: Either do some stuff more OR get a poly from above as it is (propably self intersecting) and make the right islands (maybe invide some inner polys [holes] to the party: see below).

For the other thingy and speaking about dogs:

There is a modified implementation of Felkel & Obdrzalek’s algorithm ported from Java to C# here: https://github.com/reinterpretcat/csharp-libs/tree/master/straight_skeleton. One thing to note is that a robust implementation of Straight Skeleton calculation is quite a complicated algorithm and has a lot of edge cases (as Tom Kelley (“twak”) demonstrates)

I’ve used the C# code in Rhino/GH by rebuilding Rhino Polylines into the library’s own geometry primitives – see code below. Because this algo isn’t as robust as CGAL/twak, moving it to the origin and scaling it up can sometimes give better results (trying to avoid accumulating roundoff errors…). Also – if the shape you are skeletonizing is very orthogonal (ie lots of only right-angled), there is a chance this algo will fail because it cannot handle so many degenerate cases (even though it does introduce multiple split/edge event handling…)
(see http://www.twak.co.uk/2009/05/engineering-weighted-straight-skeleton.html)
Code:

Hi @daniel.fink,
Your move to origin and scaling solution solved some of the issues I had with ssk library! Brilliant!! Thank you!!!

However, in certain cases, one or two of the created faces are way too long. Do you have any other suggestion on how to tackle this issues?

SSS.gif822×669 378 KB
Found this topic related to my floorplan perimeter zoning issue and took a few days crafting the code. I got some prototypes but, still a long way to go I guess. More puzzles are like: how to solve inner loops? what if edge-collapse and offset-split happen at the same time? …
Actually I just clip the inner skeletons with the polygon offsets to solve my perimeter zoning issue, and use the maximum distance (skeleton joints to original edges) as the upper limit. For that I don’t know how to weave those 2 thingies into iterations together, this can be a waste of computing resources. It seems offset thingy will lead to straight skeleton naturally. Hope someone could give me a hint about this.
Very useful tips @PeterFotiadis! Really appreciate and look forward to more details about how you solve skeleton puzzle with recursion (do edge collapse if not encounter with poly split when test the vertice back and forward?). I follow these 2 lines to do my poly offset puzzle:

Long way to go and I cannot bear my dumb code (with GHPython). Maybe I’ll share some when most of the nasty cases are covered. What is ccx thingy by the way?

What is ccx thingy by the way?

Ccx is an “acronym” for Intersection events (LineLine or some other). That said the C# that does that is strictly internal (CNC routing blah, blah) … but I could check your stuff and provide (if required) some tips/hints: Oops: I can’t do that since you are in the P bandwagon (and there’s no auto translation possible to the right thing).

BTW: Since you are after that puzzle go for the general case: take into account holes as well. By doing so you should classify inner and outer Loops as clockwise/anti clockwise (or the inverse) - kinda trying to offest correctly Polylines/PolyCurves etc etc.

@LiquidSo Kindly, can you clarify how you got this result in the GIF. I think that your clarification will solve this problem.
Looking forward to hear from you.