I am starting with Rhino.Python to develop programming and scripting skills and since I have zero knowledge of written programming (i have only worked with grasshopper’s visual programming) I have delved into the RhinoDeveloper Rhino.Python 101 as it seemed the best way to learn it.

I dont know if things have changed a lot (or if i am the first one to use these guides), but i couldn’t get the script from the bottom of 2. Python Essentials to work.

It seems to fail when using _SelName inside the sweep1 command, as it props a window. I added a hyphen before every SelName to fix it. 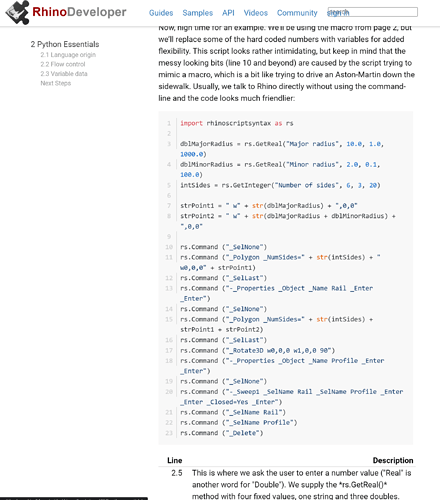 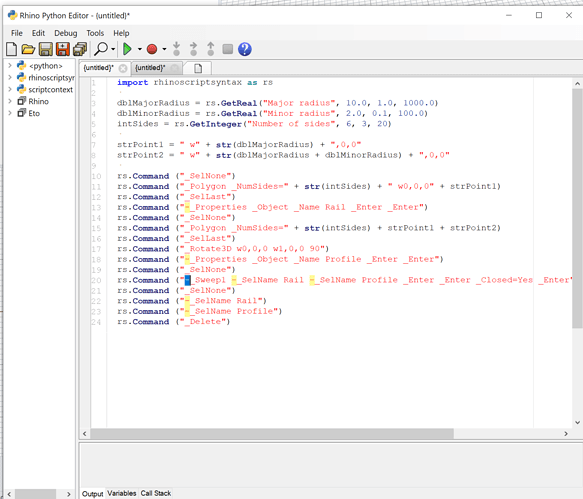 I can’t even run the next chapter’s 4.4.1 a simple function script and get the results shown in the guide by copy pasting and since i am taking this guide to learn from zero, i cannot guess if it is due to python changing or what.

I mean, what does the last mean?

I know I know, that is even stated in the guide. What I mean is that if the document exists, at least lets make it work as intended.

I read that guide quite some time ago and I don’t know if it has been corrected then in any way …
But for what I saw, it was by no means something useful for newcomers to Python.
Clearly a quick and dirty translation from the VBScript guide, with VBScript terms and concepts, even some VBS code …
May be useful to learn something about Rhino’s Python API, but you have to know Python already.