Hey there. I hev a bit of an issue with Rhino Mac. I would love to layout my plans in Rhino and print them there directly. However, i can only choose from predetermined lightweights in the layer tab at Rhino Mac. Those only start with 0.13mm which is too thick in my opinion. Any chance I can add custom line weights myself? Didnt finy anything about this on the net…

Don’t have my Mac here, but you should be able to select one or more objects and in Properties, under Print Width, you should be able enter any value you want. Not sure if you can attribute a custom value to a layer in the same way…

Nope - all linewheights are predetermined and fixed here…! 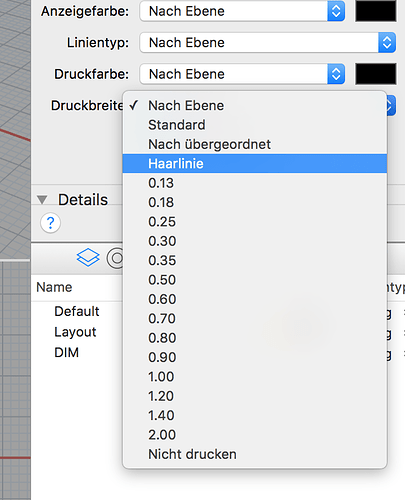 If you just click in the print width box - not hitting the dropdown arrow - can you just start typing in a value? that’s how it works in Windows Rhino…

Well, as a stopgap measure, you could try the following script:

one can simply not edit the line weights.

Does the script above work at all? --Mitch

Sorry, to be such a noob, but how to i run your .py script at rhino mac?
I find it a bit frustrating that rhino mac works so differently and bad compared to the windows version…

i think that fact might also have participated in a lot of licenses being returned and exchanged to windows.

Dunno, ~70% of the students here that use Rhino are on Mac…

thanks so much guys. To be honest, I am the biggest fan of rhino in general (so I shouldn’t bitch too much about rhino mac), and I see this open and honestly caring attitude in the community as well. This solution is a bit of a detour, but I’ll work for me!

I logged a feature request for this at
https://mcneel.myjetbrains.com/youtrack/issue/RH-43468

This solution is a bit of a detour, but I’ll work for me!

To make it easier, as @RichardZ suggested, you can create an alias. 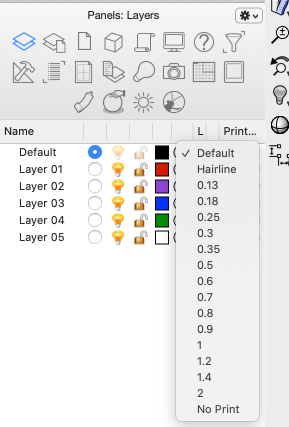 The widths shown in the dialog, are standard drafting line widths in mm.
I don’t understand what problem a custom width would solve.

Can you describe what problem not having a custom option would solve?

While having custom line weights as allowed in Windows would be ideal it is not critical - the bigger issue remains for me is how Rhino on Mac handle those weights.

Why are’t hatch patterns printed correctly in hairline but more like 0.13 at the thinnest? I can only fix this by exploding the pattern, shown on the right. There is also no visible difference between a 0.13 and a 0.18 (compare 0.18 cut lines and 0.13 doors).

Also if I export instead of print, line weights just doesn’t seem to work at all. It is overly thick and worse, certain lines are thicker than others, despite being on the same layer and having their Print Width set to By Layer (compare doors/sink and sills/lines next to the sink).

Am I missing certain settings or is this an issue on the Mac?

Are you trying to compare line weights on the screen or on a print?
The screen uses a relatively gross approximation.

No, these are screenshots of PDF exports.
Also note the grid hatch being too thick while set to hairline.
Thanks

Print them to paper and see how they look please.

@jchl please try exporting to PDF instead of printing to PDF. It would be good to know if this produces a different result