I’ve been noticing some performance issues with Rhino 7 on the last few jobs I worked on. The model starts out fine but as time goes on there develops a small pause after some operations (trimming is an example). I’m running the latest RC.

It’s not file size dependant, as it happens even with very small files. The longer I work on it, the more pronounced the pause becomes. Closing Rhino and re-opening doesn’t solve it. The only way to get rid of those annoying hesitations is to restart the computer. But then it slowly comes back.

But now I have a bigger problem. I can’t get Rhino 7 to open as it gets stuck loading the IronPython plug-in. 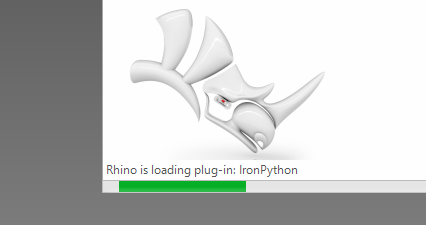 It’s been hanging here for about 20 minutes. Rebooting doesn’t solve this. The only way back into Rhino 7 is in safe mode.

Tomorrow I will disable the only plug-in I have loading and see if that helps. In the meantime, I just want to find out from other users if they experience a hesitation after certain commands. I haven’t purchased the licenses for everyone else yet, so I can’t test this myself to try to determine if it’s a Rhino issue or my computer.

I fixed this. I’ll leave this post here in case it may be beneficial for others.

Although my graphics driver was only a couple of months old, it was too old for the latest RC I guess. I updated the driver and this issue went away. I not only can now open Rhino 7, the annoying hesitation seems to be gone too.

Any chance you could post the specifics on Rhino version, video card and driver versions that didn’t work and did work?

I’m running the latest RC (7.2.20343). I have an Nvidia quadro K5000 and the driver that I was running was 452.57 which I updated to about a month ago. It was fine until a couple of days ago when the performance of Rhino 7 started to take a dump. By yesterday afternoon I couldn’t even open Rhino 7. I left it all night, and this morning it was still locked up trying to load the IronPython plug-in. I re-ran the installer and used the repair option, but that didn’t help at all. So just on a whim I decided to see if there was a new driver, and there was. So I downloaded and installed 460.89 and the problem was instantly fixed. Rhino 7 opened without issue immediately after the update. I’ve been working with it all day and there is no hesitation anymore.
I wonder if it’s possible for a driver to corrupt? That sure seems to be what happened.

@stevebaer - fyi, just in case this is of interest or you have an idea what might have happened…

I’m surprised the python plug-in is even loading at start. There must be another plug-in involved that is loading python.

Yes, I have my plug-in (which are compiled python scripts) loading at startup.

For me it’s not the issue of slowing down. It’s completely stuck on “loading ironpython…” from time to time.
Reopening Rhino usually fixes it. 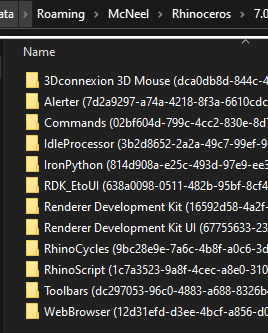 One of these that may be acting up?

I have not had this happen again since updating to the very latest graphics driver.