Hi, I’m having trouble with the ‘Picture’ Command in Rhino6. My Rhino6 is up to date. When using the ‘Picture’ Command, I place one point of the picture and Rhino crashes every time. The Image tried is PNG, JPG and very low res. Any help would be greatly appreciated! I hope to get Rhino7 in the future, currently I need this to work on 6.

Here’s the system info report, thanks for the help!

You’re running Big Sur on a Silicon M1, with a Cintiq tablet as a 2nd monitor.
V6 is going to have problems.
It’s possible that Monterey will work better but it might not.
V7 should be some better.
Rhino is not going to take advantage of the new Silicon processor until V8, sometime next year.
Until then, Rhino is going to be a bit wobbly because it’s relying on the Apple Rosetta translation tools intended to support Intel CPU compiled software like Rhino to run on the Silicon processor Macs.

From the V6 System Requirements page: 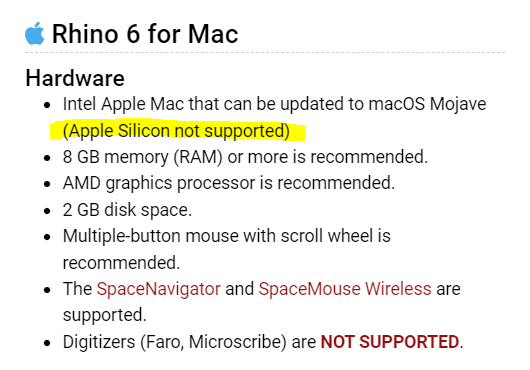 Thanks for your help John. I ended up upgrading to 7 so hopefully that fixes the picture function issue.

Have a nice weekend, Oliver