I just noticed this in Rhino 6. In blockmanager, if you export a block the block name is not automatically populate to the export location as it would be in Rhino 5, is this a glitch or an intended feature. Can it be changed some were in settings so that it will fill in the name of the block? The one advantage i can see in not auto populating the file location with the block name is that I could call a block “12-1/2 inch tube” or something like that and not have an issue with the fraction.

And to Launch a new window the upper question needs to be checked.

In Rhino 5 the dialog box already has that checked 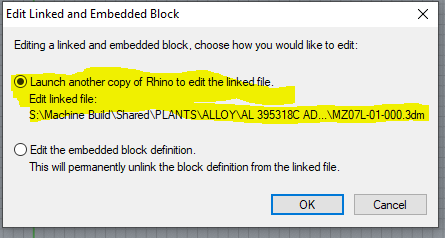 Any way to change this in Rhino 6 so that the upper box is checked. Is there a reason why in Rhino 6 the first option is to permanently unlink the block or is that some unnoticed glitch in Rhino 6

Hello - I can’t argue with either point, I’ll get them on the list - thanks for pointing this out.

I just updated WIP Rhino 7 and it appears that the block name auto populate when you export a block still is not working as it did in Rhino 5. It does appear that problems posted earlier with Rhino 6 and associated with opening an older Rhino version file that has linked blocks has been fixed. Thank you for that,

Spoke to soon. I opened a file created in Rhino 5 with no apparent issues with the file version. Double clicked on a linked block to open it for editing again with nothing out of the ordinary. Closed the linked with out any edit or saves and a window popped up about “Block name conflicts”. There was at least 12 instances of this window with different block name conflicts when there should have been none