AMD has just released their renderer for Rhino.
It’s free and open-source. It’s GPU accelerated. It’s based on OpenCL, so should work on Nvidia or AMD graphics cards. It renders in a viewport using Rhiono’s materials

Radeon ProRender is an easy to use, physically accurate renderer you can use to render anything from nature to mecha to archviz. We’re pretty excited to be able to share this amazing renderer with you, and even though it’s still very much in beta, we hope you’ll like it as much as we do!

The Radeon ProRender plugin is fully integrated into Rhino 6; it is part of Rhino viewport with support for real-time changes to the scene and built in rendering information. It uses the Rhino lights, materials and textures and will render accurately your geometry. Radeon ProRender also comes with a library of material to get you started

Note: the latest version of Rhino 6 WIP was released last night, which changed the version number, making the render plugin complain “plug-in not compiled for this version of Rhino”

Is Radeon ProRender compatible with Rhino 5?

There is now an updated ProRender 1.1 that uses the latest tools from AMD. 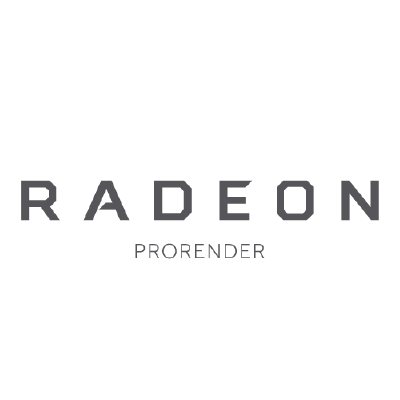 That package isn’t compatible with the Rhino Installer Engine. Which is a pity because I’d like to try it out.

Could you build and post a version that works with the released version of Rhino 6?

You probably have a too old service release of Rhino.

How to select ProRender as current Render?
I see it in the list but after selecting it - it jumps back to RhinoRender.

I was indeed, now fixed

I wish I’d read the other thread first. Looks like it only works with an AMD card (no matter what their blurb says about OpenCL). DOH!

I tried a render and the renderer used CPU only. I will try the AMD forums to see if there is a workaround or an update.

I have one Rhino relevant observation though: SubD surfaces are invisible. Toucan renders them but ProRender doesn’t even try. Is it too soon to ask about SubD support or WIPs?

I’m having problems loading the plugin on rhino 6. I get the following error:

This is a new computer.

I found out the problem. It seems that some rhino plugins don’t like my name. My windows user folder had my name with accents (Brandão), and it seems AMD ProRender doesn’t support it. I noticed V-ray was also having some issues. To solve this I had to create a new user, port everything over and delete the old one.

My windows user folder had my name with accents (Brandão)

Thanks for investigating, I have logged a new YT issue for this: RH-49632.

@nathanletwory thanks for logging this bug. How would we fix it? Rhino itself, and all the plug-ins we write work just fine with non-ASCII usernames. This looks like a bug for AMD ProRender.

I guess we need to report to AMD Pro Render team. I’m guessing @andy has the necessary contact information for that.

Any new about this renderer ? … It could be perfest solution for rhino on mac.

At the moment not much more than that it is on the radar.

Any news on this? (or any other GPU renderer which also supports Rhino for Mac?
Thank you!

Does your MBP have an AMD graphics card? If so, which one?

That’s exactly the point… I would like to buy an eGpu compatible with my Mac mini to use exclusive with pro render for Rhino 7 Mac …I’ve found the eGPU Blackmagic on sell directly from Apple but I think the AMD 580 that it has inside is not very performant.

I think ProRender only works with Navi and Vega cards…the 580 is a Polaris.

No idea how well it works with an eGPU

ok. do you know who’s the plugin developer?