I’m a piping engineer and besides pipe diagrams I also make the 3D model of the pipes. It is time consuming to make polylines and then to use the pipe comand not to say when you must make some corrections. Is there an addon for piping in general (routing and making isometric drawings)?
Is there a way to route the polyline using the gumball (I’m quite amazed that Rhino doesn’t have that option)?

Have a nice day and thank you in advance.

Hi Ciprian - Rhino does not, itself, have any piping ‘module’ but there may well be something on Food4Rhino.com

You may also be interested in the test command testPipeMatch - given two skewed pipe center lines it will try to find a connecting center lines with the specified radius at the joints.

Wow, the testPipeMatchcommand is quite handy! God knows how many useful but hidden commands exist in Rhino that we, the basic users, even don’t know about.

Just added this command as a RMB alternative in the “Match curve” icon.

The only confusing thing with that test command is that it will not prioritize the curve end I click. Instead, it will prioritize the closest points of both curves, no matter where I click along their length.

Thank you for your answer. There are some good modules there.
Regarding the command “testPipeMatch” , it says unknown command? Is it for newer version of Rhino7? I will ask the admin if we have the latest version.

In the meantime, you can use my script that utilizes the RhinoCommon method, Curve.CreateArcLineArcBlend, which was added to 7.9.

Thank you for your answer.
For some reason (I’m not good with scripts) it is not working.

This one works on either end of the curves. Thanks!

I have two suggestions: 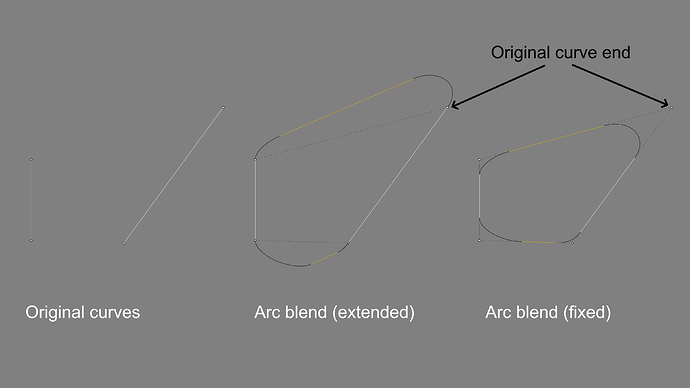 The script only works with Rhino 7 SR9 or higher. If you have it, follow these directions:
Rhino - Running a Python script in Rhino