How can points be offset, with the ability to determine their distance. Yes, they can be moved and manipulated with the move command, but that is if the condition is simple such as a set of point on a z axis. What if the condition changes to a sphere or a cone. If the shape is populated with points how can they be offset in relation to their own axis coordinates or inherited from the offset origin.

use “evaluate surface” which gives you the normal for a specific point on a surface.

To use “evaluate surface” I have to have a surface which I do not.

I am not sure I understand you:
you show a series of points and you want them to be offset according to a shape.
are the points on the shape?
which is the shape? can you elaborate a little bit more please?

For example, the sphere has been populated with points, then the points where offset. The offset is it in respect to their own x, y and z plane. How can the distance between the existing and the offset be controlled?

in this example, I fed move with 36 points on the surface and 36 numbers from the series. so the operation is repeated 36 times, each time for a unique point and a unique length.
Now, how exactly you want to create this series of lengths to move the points is a different story.
Do you want to create something specific or is it a theoretical question? (both being equally valid) 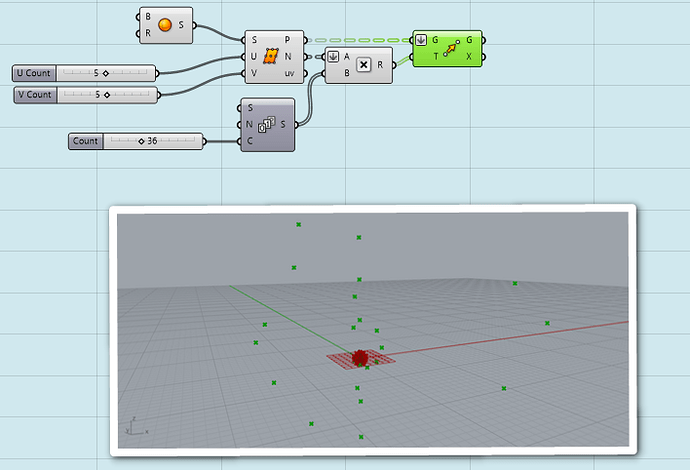 This is a theoretical question that derived from a previous query. The idea is to be able to control the distance from the points, with a slider for example. Just like you would with grasshopper native move command.

Use aris solution and replace the multiplication with an amplitude component

Carlos,
(eres espanol, de paso?)
I see that you’ve spent some time on this forum, so you should spent a few minutes to read this.
Mostly, that it is common practice to post the files you’re working on so that people don’t have to recreate them from scratch.

Now:
Usually, in parametric design, the workflow is to define a rule that governs the behavior of the individual elements.

As a simplified example, You will see bellow that we are moving points from the line in the z direction.
(you can play with the graph to see how the transformations will correspond to it)
Very rarely (if ever) do we input the transformations manually one by one.