No V7 in toolbar

How do I get a separate button in the toolbar for V7 which I can pin down? 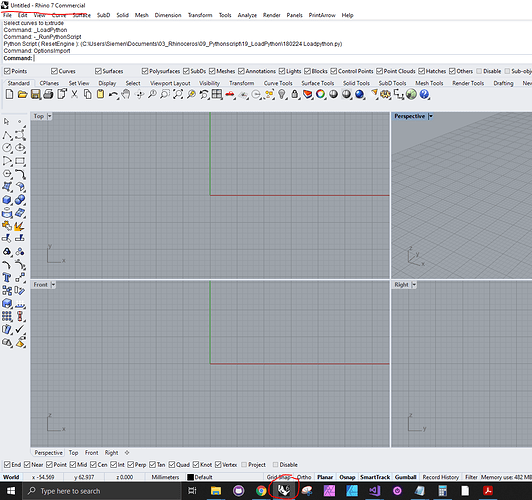 Hei Siemen - I’m a bit confused about the word “Toolbar” and the part that is underlined in the picture.
Are you trying to put a start button for Rhino 7 on the desktop?
-wim

I’d like to pin V7 to my windows taskbar. But when I open V7, the icon for V6 gets activated (as you can see on the bottom of the image).

I think he is referring to the problem that windows does mix up the taskbar icons for version 6 and version 7 as described inthis thread:

Hi. The title says it all I suppose. Rhino 7 WIP and Rhino 6 seem to be identical to the windows task bar. So it is impossible to attache two separete icons for both programs to the taskbar, causing all sort of confusions and problems. They are different programs on my computer and should behave as such. Cheers, Norbert

Thanks for that clarification. We have an open issue for this one - RH-61086 (not visible to the public) and I have added this thread to be notified when it gets fixed.
-wim

I’d like to pin V7 to my windows taskbar

Just to be clear, it is only the running instances of 6 & 7 that get overlaid on the same heap with a random Rhino icon. You can still pin R6 and R7 separately so you can launch new instances from the taskbar. Just go to whichever you want in the Start list, right click the icon, select More and select Pin to taskbar.

Below you will see that I have a pinned R6, a pinned R7 and a stack of running Rhinos of mixed parentage (but their descriptions still identify which is which when I expose the stack members with a mouse hover)

To be honest, I think this is only more of a mess:
Now you have two Rhino 7 buttons/icons!
If you now launch a Rhino 6 instance it will NOT launch another Rhino 6 button, but the instance’s window will appear under the second Rhino 7 button.
No consistency at all.

Yeah, it isn’t cool; in a straw poll of some of the apps on my PC most program instances associate with the pinned icon, Rhino and Gimp being the exceptions.

Personally, I don’t pin things into the taskbar and I can cope with R6 and R7 instances sharing an icon.

But the OP did ask about pinning a separate R7 icon and I wanted to show that it can be done.

Thanks for the workaround! Not ideal, but better than having to search for it every time I want to open it.

Hi, is there a fix for it yet?

I’m not sure. It looks like @Brian closed RH-61086 because the issue couldn’t be reproduced. You might need to be more specific about what the issue is. RH-61086 was about the Rhino 7 Beta installer overwriting the v6 registry settings…
-wim

I’m seeing what Jeremy reported above for icons on the taskbar. I have Rhino 6, Rhino 7 and Rhino WIP installed and each has an icon on the taskbar. With no versions of Rhino active the portion of the taskbar with the Rhino icons looks like:

If I start Rhino 7 an second Rhino 7 icon appears to the right of the other icons, and that icon is linked to the Rhino 7 instance. This is as expected.

If I start another instance of any version of Rhino, then the Rhino 7 icon on the right changes to indicate multiple instances for that icon. For example after adding an instance of Rhino 6:

And then adding an instance of Rhino WIP"

This is confusing because the user needs to click on the Rhino 7 icon to switch to an instance of Rhino 6 or Rhino WIP.

The same behavior happens for which ever version of Rhino I start first. A copy of the icon for that version of Rhino appears to the right. Then if other versions of Rhino are started those instance are added to the first icon. For example after starting Rhino 6, Rhino 6 (2nd instance), Rhino 7 and Rhino WIP:

Other software when started does not create a copy of it’s icon if the icon is already on the toolbar. Rather instances of the software are linked to the existing icon.

If I start Rhino 7 an second Rhino 7 icon appears to the right of the other icons, and that icon is linked to the Rhino 7 instance. This is as expected.

Is this as expected? As you mention yourselves, none of other softwares on the toolbar create a new icon when launching it.

Is this as expected? As you mention yourselves, none of other softwares on the toolbar create a new icon when launching it.

I’m used to it but I would prefer that Rhino behave the same as other software and not create a new copy of an icon if the icon is already on the tool bar.

No.
It still is a total mess.

This won’t be fixed. I tried several different ways, and it was a mess regardless of the fix.

But why is this a problem with Rhino?
I have never seen another program showing this annoying behavior.
I am sure you have good reason to come to the conclusion that this won’t be fixed.
It would just be nice to hear your reasoning (in layman’s terms of course)

But why is this a problem with Rhino?

I think it’s because Rhino 6 and Rhino 7 and Rhino 8 all use the same program name - rhino.exe. This is done to make it so plug-ins continue to load in newer versions.

There are some parts of the Windows API that key off of the application full path, others registry keys, and yet others the application name. The dock bar uses the application name, but can be tricked with some additional data in a manifest file embedded in the application. When I tried using that, people complained that the icon in the task bar would get deleted or abandoned whenever they installed an update to Rhino.

The details, with attempts over several years are here:
https://mcneel.myjetbrains.com/youtrack/issue/RH-60614