This is R6 sr8…Lines are getting split because of polysurfaces behind…? Is there a setting I’m missing. I can post an example if needed.

This doesn’t happen in R5.

R6 SR9 has now been released and so has the first RC for SR10. I would suggest upgrading and then updating your post if the problem still exists (or has been corrected).

Problem is still there in SR9 and I’m not sure where to even get RC SR10 from. BTW when I checked for updates Rhino said I was current, I had to manually download SR9.

See attached file, make2d front view, all lines are split where any lines in the background cross.make2d-split-lines-example.3dm (1010.0 KB)

So is this an issue on my end…a new feature…or a bug…?

I only see one line or curve in your file which is in the low-wall-cap layer. I’m referring to Rhino line and curve objects which I searched for using SelCrv.

Are you possibly referring to the “isolines” of a surface? If so isolines are a function of individual surfaces including the surfaces which make up a polysurface. They are part of the display of surfaces, not separate objects.

Hi Brian - is this an example of what you’re asking about? 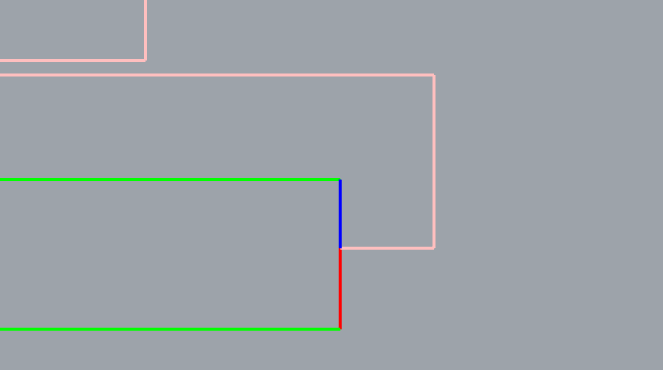 Yes…That happens anytime there is a line in the background, the line in front is split.

Hi Brian - can you post a screen grab of the Make2d settings you’re using? Either this is fixed or I am too stupid to repeat it…

Here you go…It’s probably something I’m doing with the settings. 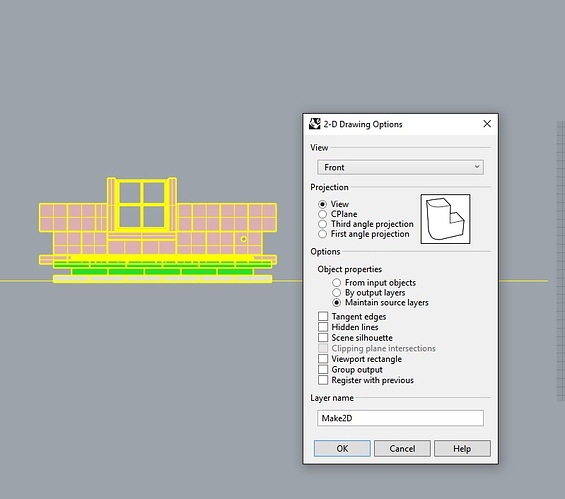 Ok, yeah it was the ‘too stupid’ bit. I had grouping. I’ll see what I can find out.

Grouping works in Rhino but when imported into Acad there are split again.

… I just meant that I was being tricked by grouping into thinking things were one curve when they are not…
Double espresso, coming up.

@bwheeler - I just chatted with the developer - it turns out this is neither a feature nor a bug, but is just the way it is… No one, to my knowledge or recollection anyway, has said it is wrong in all the V6 cycle, though there was a ton of churn around Make2D durung development. The fact that until now this aspect seems to have been OK out in the field makes it difficult to just go in and ‘fix’ - we don’t know how much evil would ensue.

So… I will make a bugtrack item to revisit this in V7, when at least it will not be a change in mid stream, and in the meantime, if you are not doing this already, in many cases at least, you may be able to get away with selecting the Make2d output by layer and running Join, followed by SimplifyCrv.

Thank You for looking into it Pascal…I’ll just use R5 for Make2d it works correctly…For me anyway. Once I finish the project I’m working on now I’ll switch over to the WIP. I can’t believe I never caught this before…I have used R6(WIP) since it first came out.