"Lofting" meshes smoothly to each other, respecting the "curvature"

Is there a nifty way to join some mesh edges (rather far from each other) so that the joining part would span out in the same angle as the mesh faces it attaches to?

I´ve been playing around with this beautiful node creating script (who´s maker I can´t remember) and would love to join different nodes smoothly to each other, to come up with something like a modern bicycle frame. The script doesn´t do well with many nodes at a time (at least I haven´t found a way) but boy if it makes some pretty smoothness when used to only one node at a time. But then there is my problem, if you want to create the forementioned (carbon fiber) bike frame design…

Hi @jere
Have you tried with SubD and MultiPipe?

Hi @AmicoCAD Have you seen the examples file and usage notes pdf? Here’s another example trying something like your image: bikeframe_multipipe.gh (11.5 KB) [image] The sliders control the size at the corresponding ‘SizePoints’ locations. 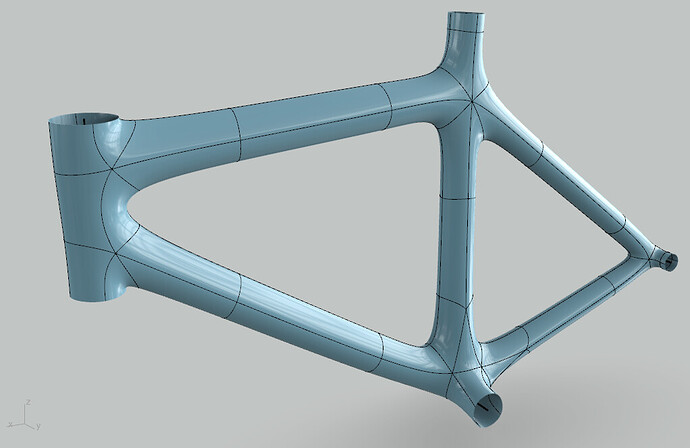 Pretty stuff, but I am interested in non-round profiles for the tubes. I´m not really designing a bike, it´s just a good example of interconnected nodes.

Of course I can adjust the nodes in many ways, to get into a shape that would continue flawlessly towards the other nodes, making it easy for a straight loft to result right. But when wanting some shape in the connecting part too, there would have to be some additional profile guides and the connecting seams get tricky.

Hi @Czaja Here’s a different way of joining between two meshes so the vertices match connectmeshes.gh (30.2 KB) [image] It uses a script I wrote for bridging a mesh between loops of points with different counts. I still need to expose a setting in the remeshing to let you choose when to allow splitting of feature edges. Without this it isn’t guaranteed there won’t ever be a mismatch between the parts being joined, but when the same target edge length is being used for both parts it should …

also this (shown with round sections, but the same approach should work for other profiles)

[image] node_radii_fair.gh (22.1 KB) Hi @gwm1010, Here’s one way of solving for different radii, but producing a triangulated mesh instead. I’ll also see about updating to allow different radii at the same node with the quad subd.

If you can describe more about the problem you are trying to solve though we might be able to direct to other approaches.

Ahh, allright… the second one looks great! Gotta try with this approach.

There´s not a real problem yet, just some ideas with this possible tangency issue.

Edit: Actually the first one does the trick well, at least with a fast test