I’m experimenting with the RiR add-in for Revit (2019) and keep running into this error, followed by an exception crash as follows

Any help would be appreciated

You need to use the Rhino WIP for V7 in order to experiment with Rhino.Inside technology

I do have the V7 WIP installed, do I need to remove the non-WIP Rhino 6? is it causing confusion between the different versions?

You shouldn’t have to remove V6. Maybe @kike can help figure out what is happening.

Then close and restart Rhino from Revit. When it crashes a file named RhinoDebugMessages.txt will be created in your Documents folder. Please send that to me - it should help me see what is going wrong.

Thanks for your reply; I’ve attached the file here - hope it has something helpful

I need some more help.

The first message stayed the same but the second one is better, I’ve attached both here 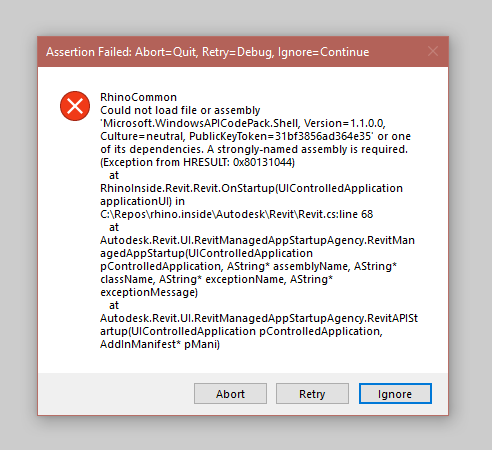 Hope this is more useful, let me know what I can do next to help

It seams you are using Windows 10, but could you please confirm me the exact version and also tell me if it is a server edition or not?

Apologies for the late reply, been away from the work PC;

Did you try “Repairing” V6 in Control Panel?
https://wiki.mcneel.com/rhino/200

Just tried it - didn’t work, unfortunately, still same error (at least I think its the same); the error -200 and then the following: 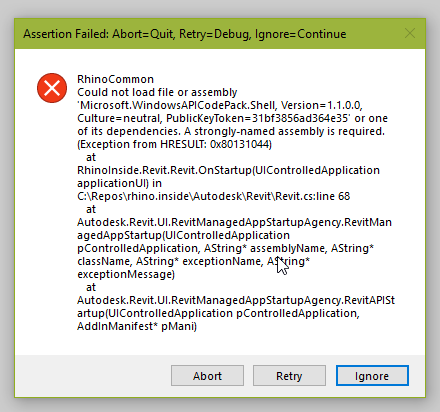 Could you please try to generate a dump file of the Revit process when you have this message box on screen?

I’ve just submitted the dump, it was taken as soon as the -200 message popped up. Hope it sheds some light on what weird things I have in here that cause the problem.

Analyzing the dmp file seams that you generated it when Rhino was stopped on the first dialog.
Could you do it while the second dialog is on screen?

I’ve re-uploaded the 2nd file again - i think the first one might not have gone through. Please let me know if you find out anything. Thanks

I’m sorry, maybe I was confusing in my previous message, but in order to make this useful I need you generate the .dmp when this dialog is on screen.

Sorry bout that - I thought thats what I did - maybe i sent the wrong one. I’m just uploading the dump with the second message on the screen (looks a little different so I’m not sure if I missed a step somewhere - if it’s still wrong i’ll try again tomorrow) 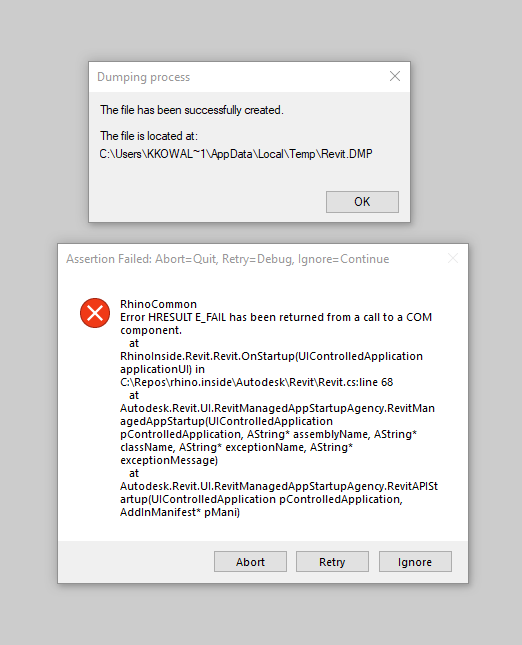 hope its what you are looking for this time

Error HRESULT E_FAIL has been returned from a call to a COM component.

In the 9th post you showed me this other capture.

“Could not load file or assembly ‘Microsoft.WindowAPICodePack.Shell’, Version=1.1.0.0,…”

If you can reproduce this again, please capture the dmp.