If I want to do a layout detail that is rotated according to my cplane, that currently does not work.
I found a workaround where I activate my cplane and save a new view in named views.
In layout detail I can now choose my named view and the detail will rotate accordingly.

It is however quite counterintuitive. And it should be possible to just activate the cplane (providing universal cplanes is on) to rotate the view.

Hope this will be fixed in next release.

I believe that what you want is Tiltview…activate your detail, type Tiltview… And specify the angle… Does that help?

I’m not sure what isn’t working for you. When I need to do this, my workflow is to make a detail active, be sure that it isn’t locked, rotate the CPlane as desired (universal / standard CPlane doesn’t matter), call Plan to finish. Is this not what you are seeing?

It’s not working for me…
I have predefined cplanes that I want the detail view to reflect.

Can I activate that thread again? for me it is always a lot of playing around, until CPlane Rotation in Detail view works. I couldn’t figure out when it works and when not. Usually it doesn’t work. I am working with named cplanes a lot, and my actual workflow looks like this that i am manually rotating all the objects in a different “printfile”, to get rotated things (90 degree sections and so on) printed… Somebody having the same issues?

Somebody having the same issues?

Rhino is not always intuitive at the “CPlane Rotation” specifics you’ve described. I’ve seen others struggle too. You are not alone.

That said, since nothing will change in a hurry (not sure if anything is different in 6) best to study and understand each of these commands:

Contained in the above commands is what you need. You should not need to rotate objects.

However, to your point, the UX design through V5 for getting the Cplane and view orientation exactly as desired SHOULD BE EASIER and more intuitive for all.

Fortunately, Rhino has some of the best view manipulation in the business, IMO.

To improve further, addition of graphical View and Cplane rotation, such as below, would be a boon! Especially for new users and certain 90 degree rotations that confuse… 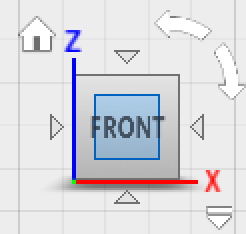 The thing is, I do know how to work with CPlanes, I’m just having issues in the Layout Area, within a detail view active, “Named CPlanes” simply don’t work. I always need to rotate the CPlane manually and hit “Plan”. By having 10 or more named CPlanes and detail views, that is always a bit of a work.

edit: I’m just working with Rhino 6 - beta. I cannot step back to 5, too many great improvements!

I just tested a custom CPlane saved with NamedView and then called that view from a detail on a layout. That seemed to work.

Views work, thats true. I would like to work with cplanes though, because then the scale (the zoom in) and the position of the camera don’t change. But it’s a good workaround!

I didn’t try the NamedCPlane (using custom CPlanes requires that I turn off OneView …).
Now I did.

I saved a custom CPlane and then went into a detail on a layout. Activated the custom CPlane.
That seemed to work - I’m probably missing something…
Of course, the custom named CPlane won’t have any view information attached to it, so I had to use Plan in that detail and then zoom and position as required.

Ok, well then I am facing a bug I guess. It was driving me mad, but exactly this is the thing which doesn’t work. I can see the X-Y cross changing to the named cplane, but the command “Plan” doesn’t change the view.

Best to post a simple scene that exhibits this issue.

NamedCPlanes do not work in details when you are using Universal construction planes (not in front of Rhino right now, but if I recall correctly, it will update model space and do nothing in the detail.) You have to switch to Standard construction planes for named CPlanes to work in a detail. I have wished for this for many years, but it never seems to get much traction.

Thanks SamPage! I checked it, and yes that was the problem! I am just working with Universal construction planes though… Anyway I didn’t use Views before, so I am working with namedviews from now on