I can't make a texture show up on my rendered viewport. Why?

I’m trying to make a crosshatch to show up on a surface by applying it to its material color and it doesn’t work. Not only that, if I click on the mapping parameters again my changes are all gone.

Maybe I’m too dumb to the way this is supposed to work, but I just can’t make sense of it. Just me? Is this broken or just confusing?

This floating editor seems to be broken, I reported it as https://mcneel.myjetbrains.com/youtrack/issue/RH-40512

For now use the materials panel and do the texture editing through that. It seems to work much better (assuming I tested that well enough (: )

do you mean this one? 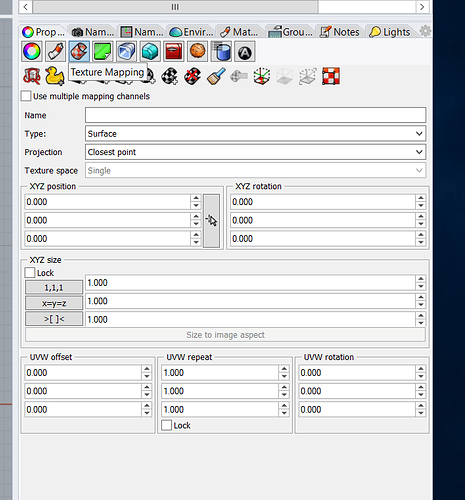 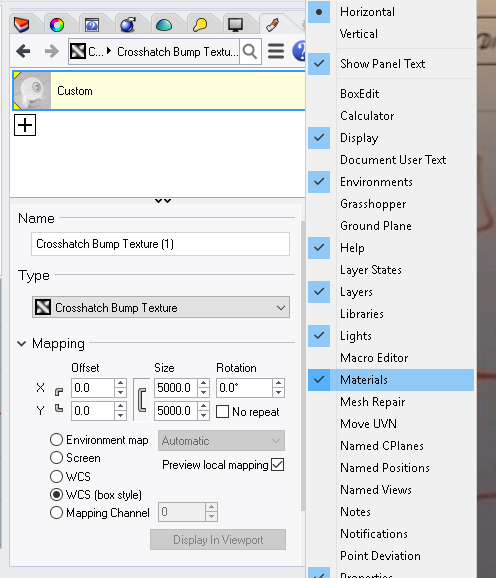 You can drill into the texture channel here and make your adjustments there.

Oh God. Oh God. so many places of redundancy…

This approach does work, Thanks! …I can’t wait to have a Keyshot exporter working on 6, so I don’t have to struggle with this mess.

This is my point as well which I posted “when will cycles be ready to use” I find the custom mapping caveats along with all this redundancy is a time and brain killer.
RM

I see your pain. I personally haven’t ever used other than the Materials panel, so it took a while for me to find out where your floating texture editor came from, but it isn’t very helpful if there are many different places to do the same.

You: work at Mcneel and you MAKE rendering software and you couldn’t find it.

Me: Pretty heavy Rhino user and it NEVER occurred to be that you guys have 4 different places to get at this:

This is a total mess. A complete clusterfuck indeed. Bad-Bad-Bad.

Like I said, your team just doesn’t get it when it comes to rendering, and probably they never will. Only solution I see is scraping all that stuff (it’s all shitty UI anyway) and start fresh with something designed, sensible, and consistent). But that won;t happen. So as a user I just want you guys to ship so plugins/exporters solve our problems elsewhere.

What I work on is exactly that - a render plug-in. It just happens so that it comes with the main product. Much of the work that has gone in creating this has been to get the SDK/RDK to such a level that other parties can work on a better snd tighter integration of their own products.

Now, I am still very green when it comes to using Rhino. And, for better or worse, often I haven’t needed to use much of Rhino’s interface. Perhaps it sounds as an excuse to you, but hey, Rhino is just… big. One can only touch so many places with just one set if hands.

I do hope we get better UI over time. Until then I work on the tasks assigned as well as I can.

I harped on this many times but eventually gave up as Steve and the others thought they were going in the right direction even in V5 I was against this redundancy and lack of polish in McNeels ui especially in the material editor, custom mapping areas and custom material application, this tabbed ui is too many mouse clicks or the settings are hard to find unless one works with them all the time.
RM

We have completely re-engineered the modal editors over the past few weeks to make them work correctly on the Mac. This is clearly a bug. Sorry about that.

@3dsynergy I understand your point completely. Unfortunately, you are not the target group for these modal dialogs with tons of clicks. Novice users, who have a lot of trouble with the modeless system, are.

The re-engineering may enable us to have an option on the modality for the properties dialog in the future. That will save a ton of clicks.

Only solution I see is scraping all that stuff (it’s all shitty UI anyway) and start fresh with something designed, sensible, and consistent). But that won;t happen. So as a user I just want you guys to ship so plugins/exporters solve our problems elsewhere.

Someone who is NOT a developer should be responsible for the UI.
For all of the Rhino UI, in every nitty-gritty detail.
A real UI expert!
It must be someone with taste and the ability to suffer.

But in the end, the users will love him

“But that won’t happen”
…
This can easily be true.
Some bugs I reported regarding the UI end up in “Won’t fix” in YouTrack.
Or in an answer like “go to technical support”.

Better to give up on reporting such glitches and bugs.
It doesn’t make sense.

Now, I am still very green when it comes to using Rhino. And, for better or worse, often I haven’t needed to use much of Rhino’s interface. Perhaps it sounds as an excuse to you, but hey, Rhino is just… big. One can only touch so many places with just one set if hands.

Hi Nathan, that makes perfect sense, you are busy doing your job, that as a pointed out on some older thread I see it as ‘developing a render engine’ and that’s an important subset of developing a rendering solution and the appropriate workflow needed for it.

I think it was just weird luck and an overreaction on my part thing that nothing works, just because as @andy pointed out, one needed texture dialog is currently broken in a pre-beta software. That’s fine Andy, no need to apologize.

I still find frustrating that there are so many redundant dialogs and yet this happened:

on that one at least it says size, on the one on the material tab it says repeat? also you have no sense of what that number means, and clicking on the arrows up/down to change scale does so in 0.001 increments! I wish I could show you but I can’t now, it’s completely broken, I have the part selected, double clicked on material and still it says “No selection”

It’s really hard for me to tell which parts of this are broken parts of functionality in WIP builds and which ones are broken user experience. And that’s the worse part of this problem.

No need to show, I went through the pains when I found the different editors. There is definitely lots of room for improvement. Personally I’d like to something visual on the selected object, some sort of custom gumball for texture space manipulations.

Maybe now that you’re here they will listen to reason the whole area of texture mapping needs help, it seems to be broke it used to work better now it looks and acts glitchy, too many weird things happen that make it hard to use.
I know one needs examples but as soon as one works in it, I get so frustrated I leave for max. V5 at least works but still suffers. Mapping needs to be looked at because of the different views effecting it depending on when one calls the custom mapping command. For one planar mapping doesn’t work or comes in at the wrong direction or xyz I gave up trying to use the wip for rendering because this is such a pain as doctor smith says. The way mapping is activated via properties for me creates a lag in time of when and where the gumball shows up and in what view do I manipulate it to achieve what I need?
RM

I was trying make and apply a simple material to this component. and nothing was happening on the viewport. The object looked like had the material assigned but it did not look like the material, then after a while I realized what the problem was. I recreated the experience in this video.

If you think most users are going to make sense if this you are kidding yourself. It fooled me for a while. This is the type of bad design that makes people stop trying, or even worse calling support. Bad design and bad business IMO.

I’ve wracked my brains about this one for years. What would you suggest we do?

One possibility is to make all material assignments “By Parent” by default.

But if you don’t report that bugs it’s far less likely we will be able to fix them. You are using the WIP - that’s kind of part of the idea. If you want to use a product with solid texture mapping, there’s always V5.

I don’t even know what ‘by parent’ means. I understand the concept of ‘by layer’ and ‘by object’ but ‘by parent’ escapes me. What’s a parent? Is that related to groups? Or to blocks? And who’s the parent? Where is the parenting tab in the Rhino interface?

One thing I do know, if I drag a material ball to an oject one thing and one thing only should happen: the object takes that material and looks like that material. In this case I was dragging and the tool tip ‘copy’ shows up (what does that even mean?!) and then I see all the feedback indication as if the material is assigned but not showing on the viewport appearance. That’s terribly broken and only causing cognitive dissonance and frustration.

Applying Dropbox’s metaphor of interface: “there is a folder. You put stuff in it. It syncs.” …to this the bevaiour should be: “there’s a material ball. You drag it to an object. It gets that material”

…speaking of blocks specifically it makes absolutely no sense that you can’t apply materials to a block item. Now you start wondering what happens to all other instances of that block, well that’s a design problem. It needs to be designed, as is the rest of this entire experience. In my opinion, it hasn’t. Or at least not successfully. Too many decisions only make sense of you look at them from the limited, and somehow irrelevant, point of view of a programmer or technical expert.