How to succeed in filleting these edges!

Please help! I’ve watched some tutorials and I still am having troubles just adding a soft edge to both sides of this shape. I don’t want it to be a really large radius fillet just a small one so no one gets cut on these edges. This is for a keychain and I have more work to do on it, but this is the beginning stages. When I did VariableFilletSrf I chose the option to trim…I don’t know if this was a good idea or not. When I did Fillet Edges I got a zillion segments along the top edge…What am I doing wrong?kitty outline.stl (396.8 KB)

Hi, first of all that is a STL file so it is just meshes so it is dificult to bugtrack for you.
Could you share the 3DM file instead?

And secondly the challenge with softening those edges is that there are areas with small details so the fillet would intersect and therefore fail unless it is very small.

Hi Holo! Thanks for responding. I meant to upload the 3dm file–so here it is! I don’t have an example, but I just want a very small fillet to kind of “sand down” the harsh 90 degree angle. Very small is okay with me. I look forward to your reply.kitty outline.3dm (3.7 MB)

I did this in Illustrator–maybe I should try next time to use rhino to trace over my lines…Thanks!

That is actually a nice model so well done, but there are improvements to be made.
I would remodel the object in Rhino and add some fillets to the curves before extruding it. 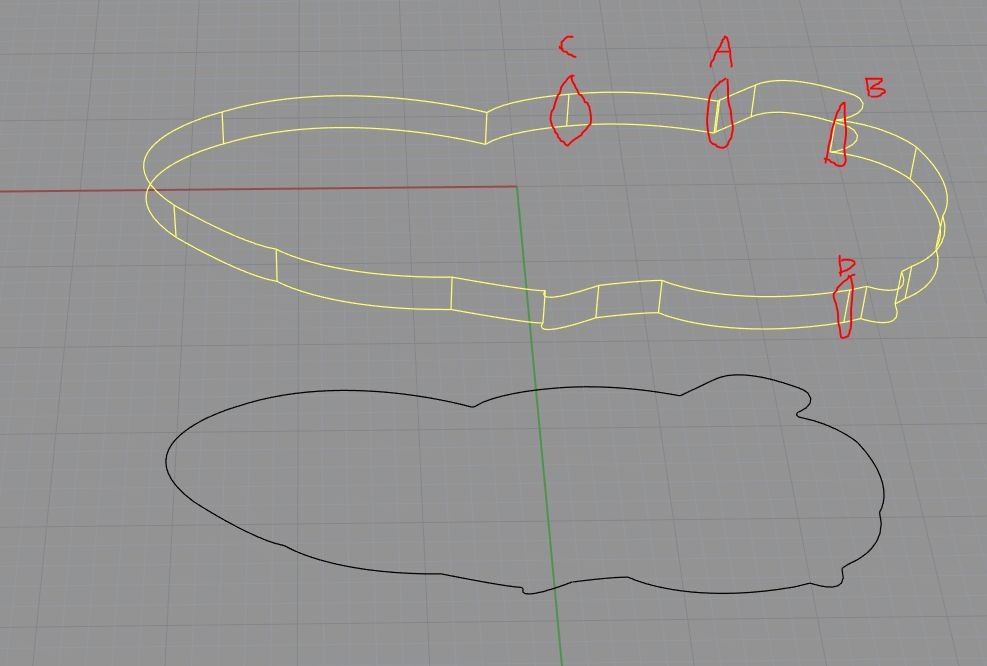 A is a short segment and should be eliminated.
B is a very sharp angle that causes issues for fillet edge, so rather fillet the curve
C and D are examples of areas that could easily be merged into the neighbour curves.

For FilletEdge to work it has to have “space” on the affecting surfaces to fit a new surface.
So simply put if you try to add a fillet with value 1 to two perpendicular curves (90 degree angle) where one of the affected curves are shorter than that value 1, then it would fail. So the faces either need to be longer than that value, or the fillet value needs to be smaller than the shortest surface.

Fillet curve is smarter so if the curves are joined it manages to extend the fillet past the first curve segment, so that can help you out here, at least in some areas.

If this is still ok for you it could be a quick solution. I converted it all to tsplines to get auto rounded endges, then applied filletsrf. 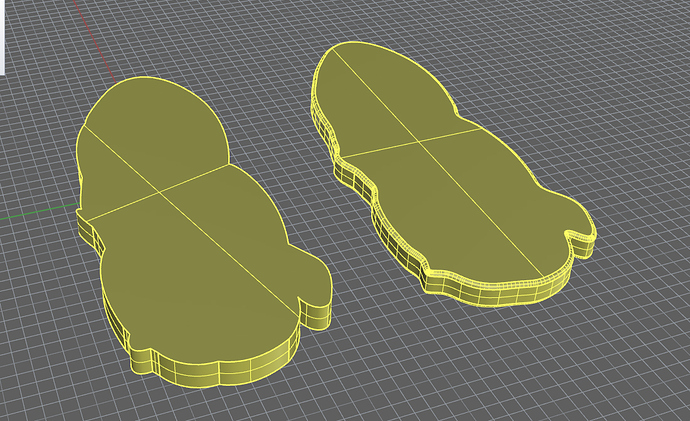 Thanks Vladimir! I didn’t have any idea you could that. Really appreciate it! Susan

Hi Susan - do you only want the outer edges softened, not the cuts? if so, make that fillet first, then the cuts.

I did clean up the curves - many of your curve segments have stacked control points - two point piled up at one end of the curve. This is typical of AI curves - I would draw in Rhino - you have many more tools not only to draw with but to ascertain the quality of the curves and the continuity within and between segments.

Pascal, Thank you! Correct, I just wanted the outer edges softened. I will definitely learn to draw in Rhino instead of Illustrator. Susan

@pascal Hi, I am opening up this thread again because you very kindly filleted the edges on my kitty cat, but unfortunately I really don’t know how to do that on another model I have. I’m attaching the hawk or eagle as some call it, but is there a video or a course I could take to learn how to do what you did for me with the cat2_Hawk bracelet 2018.3dm (4.0 MB)
? I did draw this in Rhino as you suggested a few months back. Otherwise, Totally lost.
Susan

First you have to rework your curves.
There are kinks and overcomplicated parts.
See layer Flat curves.
Please turn on the control points, and compare them to yours.

After that, extrude them by 0.8.
See layer Flat without fillets (hidden).

As a final step _FlowAlongSrf the ready made object.

Hint: If you do the _FlowAlongSrf with history, you can edit the source object to get other results.