This has made me confused more than once, namely that the Gh Join component doesn’t actually Join its input curves, unless adding an extra Join component at its tail, like so :

does this happen in the basic example of having two lines which are then joined? because for me, it works as expected : 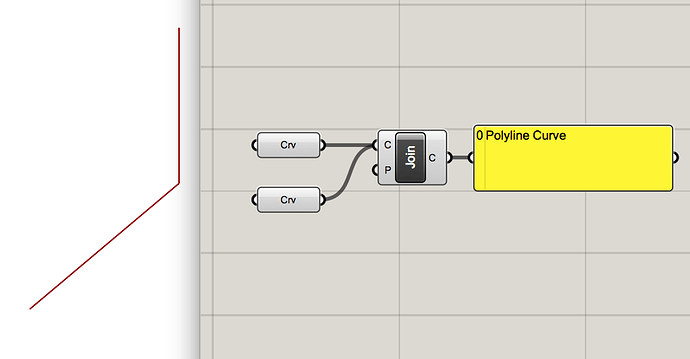 Hm, I get proper result when making fresh lines like you :

But, then I tried to “Flatten” the output of the two Line components feeding the input curves to be Joined, and then it started to Join at first attempt. Should that really be needed? < scratching head >

Should that really be needed? < scratching head >

Yes, this is an essential part of how GH works. Join joins curves by branch, that is to say all those are in a list at the same branch level. This way, you can have a tree with many branches and only the correct corresponding curves are joined for each branch level.

If you are wanting to join curves on different branch levels, you are going to need to either flatten the different lists, or use something like PathMapper to re-route one or more of the branches so that they are at the same level.

Join joins curves by branch, … at the same branch level

I just didn’t think of the fact that everything “multiple” is a list by nature, and that all lists in Gh (probably) are of the same type, which has branches (overlooked that). It’s intuitive once you come to think of it that way.

I have a similar problem. Two curves shall be connected by a blend curve and than be joined.
I tried hopefully all options to change directions as I thought that might be the problem.
The join items are grouped below,
I tried to minimize the items but wasn’t sure where the mistake is.
So please forgive the size of this.
Join curves problem.gh (126.4 KB)

Thanks for your help.

As above, flatten the input to the Join Curves component.

Hi,
thanks for the fast answer, thought I tried that also, but it works.

Sir, I just came here to thank you!! I was suffering this for hours

thank you so much, I am new to grasshopper and this saved me so much.