I just got through reading for a couple hours in here about NakedEdges b/c an IGES file I imported today had a lot of them. The thing is, I haven’t found a way to get the edges to line-up so the part can become a solid for use in Inventor.

I read Pascal’s workflow, but I can’t use it on an imported IGES file b/c none of the surfaces can be UnTrimmed. So I’m stuck w/these mis-matched edges and don’t know how to bring them together. I read that JoinEdge is a bad idea, so I won’t use it. I also tried MatchSrf but that didn’t help. I tried deleting the surface and using CurveNetwork but it was only nominally successful. I tried other surfacing commands and had the same result.

Is there a command specifically dedicated to this?
Or is there a work-flow I can use?

there is no general, magic button to “fix it all”.
if you can provide a file it is easier to help

with
_crvDeviation
and
_edgeContinuety
you can guess the tolerance, the object will allow to be joined without a problem

more help is nearly impossible without seeing the file.

Thanx Tom,
Let me look at the pdf and get back to you.
Cheers…

Also check out the iges’ tolerance. Maybe your Rhino file has a higher tolerance than what the iges was built with, thus resulting in micro gaps. So lowering the tolerance of the Rhino document prior to importing might do the trick. 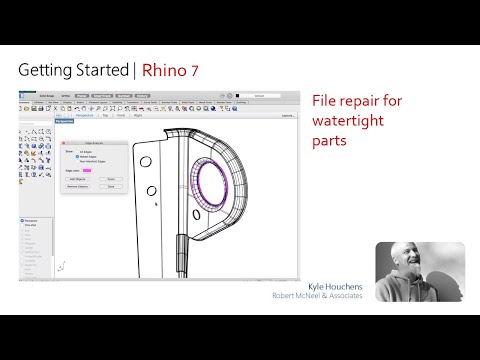 Thanx Kyle.
I’ll check it out and get back to you.

Hi Tom,
I checked out your pdf (read through about 1/2 of it and skimmed the rest).
This was very nicely done!
However, there didn’t seem to be any instructions on how to fix imported models.
But I did get an idea of how to approach re-making the whole thing from scratch.
But since that’s not what I have time for, I’ll have to leave that for another day.
This is mostly an educational exercise.
The most valuable part of the pdf for me was the Analysis section, and how Analysis plays into good surface modeling.
GCon helped me see that this model is a mess!
It has G2, G1 and disconnected endpoints, among other problems.
I think the exporting application did a cruddy job of making a usable IGES file.
Anyway, thanx for sharing this info, I really appreciate it!

how to fix imported models

yes there is:
Chapter 16 Troubleshooting !!!

GCon helped me see that this model is a mess!
It has G2, G1 an

try other file format ? other settings for accuracy / tolerance ?

Kyle, thanx for that very informative video!
The model I’m working with is composed of very complex curves.
Do you have a video on fixing IGES files with surfaces like that?
One thing I got out of watching it was all those way you check a model.
Also, I never knew that shft+ctrl+pick could pick a surface that’s joined.
Where have I been all these years?!
Anyway, thanx for sharing that excellent info!

OK, I’ll print out Chapter 16 and work it.
I agree, the video was good!
From reading Ch16 I just learned that when you set the tolerance only surfaces will Join that are within that tolerance. This is new info to me who started back in Rhino2 days and didn’t learn it back then. I’m just trying to get back into surfacing and a lot has change. Between all the enhancements to Rhino and using Grasshopper, it’s like being dumped into the middle of the Atlantic and being told to swim to shore…haha!

crvDeviation works great.
So how would you fix large curve deviations?
Rebuild the surface from scratch?

Holo,
If I Open the IGES file in Rhino instead of Import it, will it take-on the tolerance of the IGES file, or will it give it the default Rhino template tolerance?

So how would you fix large curve deviations?

really depends on the data / shape / hierachie / and your needs on the imported data - next steps.

the model in the video is an imported iges file-

if you simply open it, it will have whatever tolerance the file was saved in. if you import it, it will ask how you want to handle any unit mismatch, but will take on the tolerance of the file you imported it into.

Try a STEP file instead of IGES, it may provide better results.

OK, thanx for that tolerance info.
I’m making some progress based on all the input here.
The main players in this saga are Export Tolerance and Untrim+MatchSurf.

Hi Michael,
Yes, I tried STEP but it didn’t do much better.
Most of the time it won’t import anything b/c the surfaces are not totally closed.
Thanx…

I haven’t found a way to get the edges to line-up so the part can become a solid for use in Inventor.

Just so I get this right, you are importing an IGES into Rhino so you can use it in Inventor?
Maybe your IGES just is flawed, reason I ask is that Inventor can read IGES on it’s own.

Can you share the file? Some surfaces, or an image?

I’m using Inventor 2010, and it’s surfacing sucks.
That’s why I bought Rhino.
Lowering the tolerance brought it into Inventor with no problems.
But it won’t come in as a solid, which means it does have problems.
I inquired in the Inventor forum what the software’s SurfaceTolerance is.
But as yet no one has responded with a numb
Find attached.
hull_01.igs (240.4 KB)