Here I tried to find a new UI - more compact and some options added. The current UI is quite to big, also at a 4K display. Also some texture slots are missing and the IOR could be better organized. I started this thread coming from this one How to set material editor order?

I hope this suggestions helps to improve the material UI, if not in the next weeks, maybe in the next months.

But it could be great to see improvements for v6, since I expect a great synergy effect for Rhino and Enscape.

Maybe the first two or three points of the list are no problem to add and also the IOR issue could be fixed by this way. 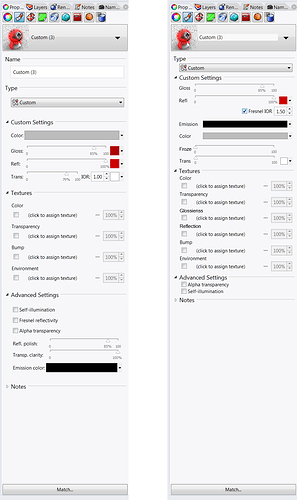 I don’t think we’ll see big changes for V6, as that all is now pretty much set. But for V7 I foresee we move to a PBR-type material definition, where every channel can be controlled with a texture. With that a changed material UI will be necessary. But on to your suggestions:

As I mentioned in your other thread glosiness is not the same as reflection polish. Glosiness is like a separate layer on top of the surface, in the PBR-based it is like clear coat (just not with a color directly).

Color I would still keep at the top.

What is Froze in your mockup?

Having IOR under reflection instead of with transparency doesn’t make much sense. For the current material definition fresnel still makes sense to control effects of surface materials on glancing angles, i.e.with glass still to have some discernable contour on curved surfaces. For V7 most likely there won’t be a separate fresnel control (since the principled BSDF doesn’t directly expose one).

Emission for V6 no strong opinions, except that I want it to be gone in general. For V7 I think there should be a separate emissive material altogether.

Textures for channels that don’t have them yet will not get those during V6. PBR-based material in V7 will though, as I am pretty sure that is the direction we’re going.

Here an example of the current prototyping. The UI is far from ready, this is mostly about the available fields, and that they all can be textured. The result is a material on a simple box, and 4 different textures applied: color, reflection (on specular), glossy (on roughness) and a normal map.

I don’t expect big changes for v6, only that the basic Rhino materials are more logical. The IOR should be working and my suggested UI isn’t really a big step forward.

I don’t understand why there is there the reflection polish at the current material. I never missed an option like this in the last 10 years Vray rendering. Interesting, this exotic option was added to the quite basic Rhino material UI, why? I would be curious how the effect looks different to the glossiness.

“Froze” - I was looking for a short and easy word to describe the refraction blurriness. Maybe there is a better solution.

I added one IOR option only, since I tried to keep the UI simple and different refraction values are not so often needed. But maybe it’s good for simple architecture glass for windows - reflection IOR 1.5 and refraction IOR 1. Attached an updated “simple” UI.

I would be glad if we could get some little enhancements for v6. It’s the basic for Enscape and very needed. Your prototype UI looks quite to much for a basic Rhino materials. I think, the basic Rhino material should be good for 80% of the Rhino users. For special needs there could be an expert material with 100% controls.

I hope some of the McNeel team will test Enscape and see, that supporting this tool will change the game. 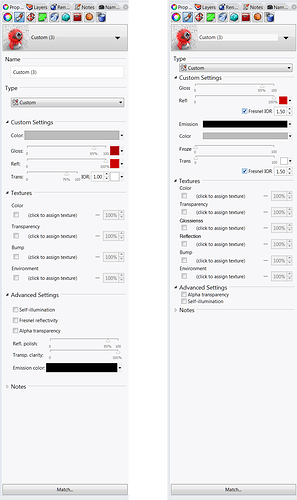 I don’t understand why there is there the reflection polish at the current material.

Reflection polish is used for instance in Rhino Metal, where it is called Polish with a slider going from Rough to Polished. This is important for getting proper looking metals, as can be seen in the thread Rendering Workflow / Quality (post 204).

“Froze” - I was looking for a short and easy word to describe the refraction blurriness. Maybe there is a better solution

If you take Rhino Glass you’ll see that it is called Clarity.

I added one IOR option only, since I tried to keep the UI simple and different refraction values are not so often needed. But maybe it’s good for simple architecture glass for windows - reflection IOR 1.5 and refraction IOR 1. Attached an updated “simple” UI.

This is probably why the reflection IOR isn’t really that much exposed, as the refraction IOR is much more used, and very much more visible in effect.

Your prototype UI looks quite to much for a basic Rhino materials.

Oh yes, it is too complicated. I was merely illustrating the point that there will be a new definition for materials with which most of the materials can be simulated. A definition that will have all channels receive the possibility to be controlled by textures. I am sure that there will be special materials that will simplify controlling that, just like now already you have Metal, Paint, Glass, Gem, Plastic and Plaster to cover most of the settings of Custom. The UI of the prototype is nothing close to what it should be in the end, ignore that

Again, I think you should be using these materials (Metal, Paint, etc.) to do most of your work instead of directly fiddling with Custom. At most you’d first add i.e. a Plaster, then convert it to Custom to tweak further. Add a Metal if you want to have a metal-like material.

Your UI otherwise looks OK, except that it lacks justification on both sides.

Again, the texture channels for glossiness and reflection will have to wait for V7.

Thanks for your feedback and efforts to mockup and argument. Very much appreciated!

A post was split to a new topic: BSDF formats in Cycles and Radiance