I believe that part of the bug has been fixed.
_ Andy

Regarding RH-60016 the problem is that the CPU utilization doesn’t match the gained benefit, most of the CPU cycles are actually lost to overhead (thread managementy stuff) instead of doing anything useful (copying pixel data). This is when Raytraced is otherwise rendering on the GPU.

I guess that part should be split off from this thread.

Using the whole CPU is not good, as we can’t do anything useful on the PC when a single Rhino instance eats all the power.
We select CUDA, and not CPU for reasons.

This will be fixed in the next WIP

This seems too work well now, both for the intel and the nVidia denoiser. The CPU load drops down to 0% once raytraced view is toggled off OR paused. That seems better than ever before, even without raytraced being used at all.

I do see that when using the intel denoiser the CPU is constantly used at around 50% (Dual six core xeon). Does that mean that it runs constantly at full trottle and outputs the denoised results as fast as they are done? It takes around five seconds between each denoised frame update in fullHD when the intel denoiser is activated.

Yes. That’s how it works.

I see the CPU is still being used even when the viewport is done calculating. Intel Denoiser is turned ON: 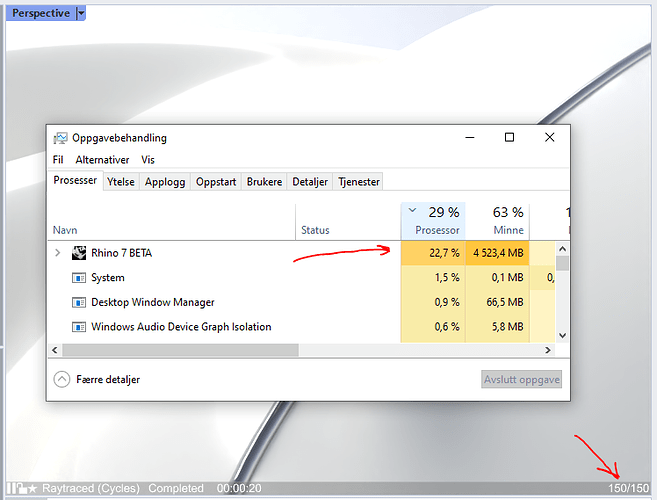 @Holo, do you see this CPU usage also when the denoiser is off? What Rhino BETA version are you using? (First line of _SystemInfo).

I believe this is already fixed. The fix will be available in the next BETA release.

It is fixed, but now there is another problem:

Nathan, you have a pretty similar hardware like me, so you should see this as well.
Or?

EDIT:
I tried to record a video.
Once I checked Intel Denoiser Rhino died and vanished.

@Charles the denoisers are done by @DavidEranen. They are completely separate from Cycles.

@Charles the denoisers are done by @DavidEranen. They are completely separate from Cycles.

Ah ok, but the result is the same for me

In any case, something is wrong.
Thanks Nathan.

@Charles understood. But that is why I @-mentioned @DavidEranen so he gets notified.

There is a bug report about crashing when repeatedly toggling intel denoiser. I believe @DavidEranen is close to releasing new denoiser plug-ins to fix the crashing bug.

There should be a new version of the Intel Denoiser available now (v0.6.0). Please download the latest BETA before updating. 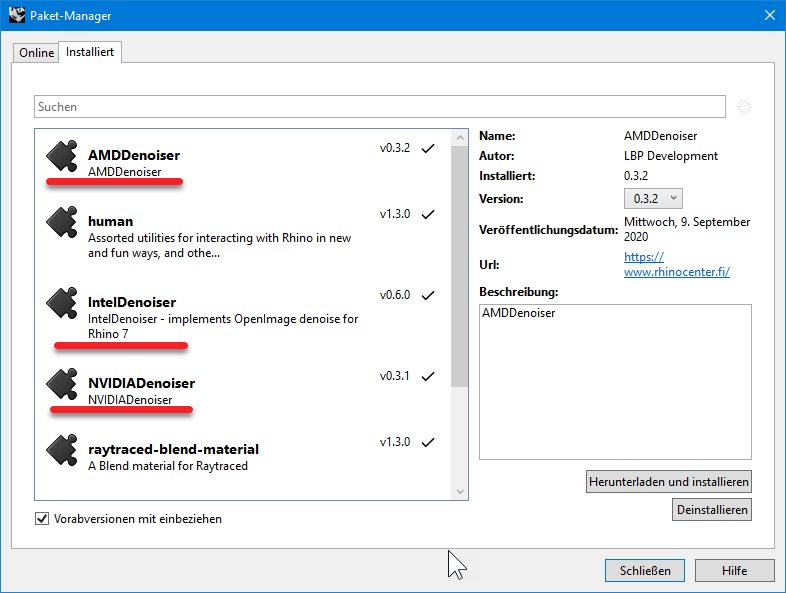 On the first start after _PacketManager, only AMD Denoiser was there.
Shutdown - restart
Intel is there.
But doesn’t work at all (screenshot after 20 sec waiting): 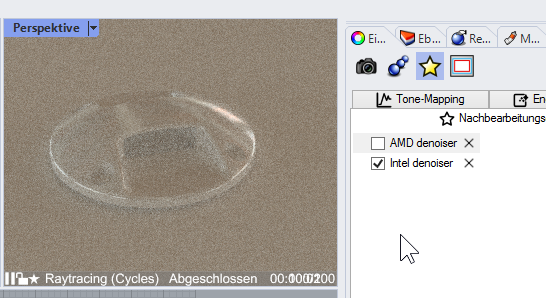 AMD doesn’t work either (this is an AMD PC): 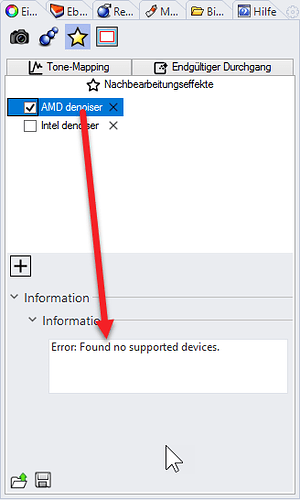 And NVidia isn’t there…
Shutdown - restart
Aha, NVidia is there.
I think this is an issue with the package manager.
OK, but NVidia doesn’t work:

I believe the package manager only activates one plug-in each Rhino start, even if you installed many in one go. @will is the person who knows best.