Please make customizable keyboard shortcuts in Rhino for Windows, like in Rhino for Mac. It is more effective working, when you are able to setup the software personally. Or Is there any different way how to do that, instead of aliases ?

Hi Tom – Options > Aliases and Options > Keyboard are the two places to look in Rhino for Windows.

Let’s resurrect this thread a bit!

I’m really-really missing a few variations from the available list:
as far as I see, it is only possible to create shortcuts for the

So in a sense, the Mac version of the command editor is much-much better!

also possible to use silly characters: 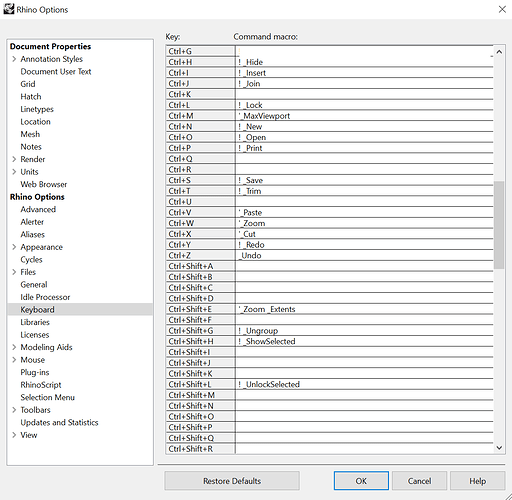 Could you make the “Restore Defaults” button a little bit smaller, to make some room for the “Add Custom” one?

I’m really-really missing a few variations from the available list:

We have that request on the list as RH-3534.
I’ve added this post to that item.
-wim

Thanks, @wim!
As I can see, the release target is “Future”, so there is no chance this will make v7?

That’s correct, yes. This would affect the entire interface and is a pretty big project.
-wim

Yes please for shift + […], alt + […] and shift + alt + […] combinations (including FN keys), this is such a bummer when coming from polymodeling packages that allow you to use these buttons.
May I add the option to differentiate between the regular numerical row and the numpad? In general, when there is no active command, both could be used for keyboard shortcuts. The ability to use both boosts the number of available single key shortcuts.

E: The arrow keys with modifiers could be mapped to NextU, PreviousU, NextV, PreviousV and to Grow/ Shrink SubD selections.

There is a way to manage the custom shortcuts for rhino - windows. You can do this with autohotkey application, it works well and you are able to create custom shortcuts. I`m using rhino everyday and it really work and saves a lot of time. Of course native implementation in Rhino without another apps would be better. But it solve the actual problem.

New to Windows and new to Rhino7, (25 yrs on Mac &3d).
Just ordered a PC, to get the “closest-to-average” Rhino7 experience.
(Delaying Rhino7 purchase until I get a sense of Windows10).

This autohotkey.com app sounds great, but can it easily get messed up with updates? Does Rhino always recognize the user’s personal short cuts? This would be great to emulate with my long term shortcuts on Mac. 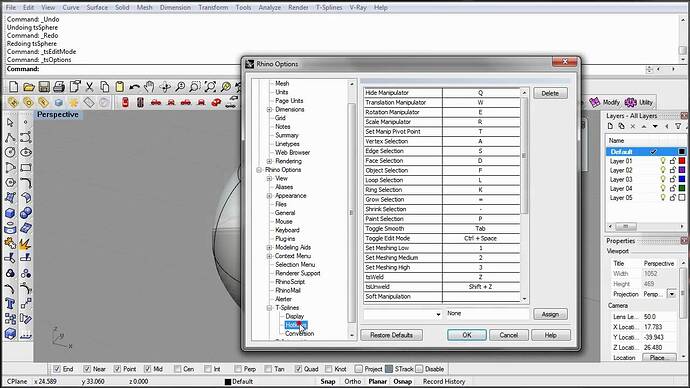 I´m too Mac user, and I had to swap to PC - Windows, so currently I´m working on both platforms. Using autohotkey on windows, is great, it temporary remaps the keyboard for the app you specified. I´m using rhino 6 and it works like charm. Hope there wouldn´t be any incompatibility with rhino 7. Windows updates maybe will make more problems, than rhino updates…

I hope that possibility to add custom shortcuts will be aded in next gen of Rhino !

here is sample for autohotkey, this will remap Shift + M key, to CtrlAlt F8: