Hello again, I downloaded a few stl files they are all flat emblem type models but there is no back which = open mesh …any way they can be ‘capped’ to close the mesh …rhino 6
Thanks

As a test I made a cylinder, deleted the bottom surface . meshed, then tried fillmeshhole …didn’t work…

Adding a few screenshots could help discern where the problem is.

“The FillMeshHole command fills a selected hole in a mesh.”
It appears the boundary of the hole must be selected in order to fill it.

Can’t seem to be able to add stl file (too big?) anyway the files basically look like cookie cutters no bottoms if it was just a openpoly srf I would cap it …looking to do the same thing only on a mesh…I made a base underneath the model could not be booleoned because open mesh and printed one but not what I really want to do …or if I could dup edge but the dup mesh edge doesn’t work in this case …

FillMeshHole (singular) asks for a selection of an edge on the hole - this is hard with a very dense mesh - the selection does not filter for open edges, perhaps it can, I’ll check. But FillMeshHoles (plural) asks for an object selection and fills all the holes it can find - try that one.

When I have a complex mesh hole to fill, I often try to subdivide the hole into smaller pieces using PatchSingleFace before I use FillMeshHole. This could also help discern where Rhino is failing to find a closed edge loop to fill. 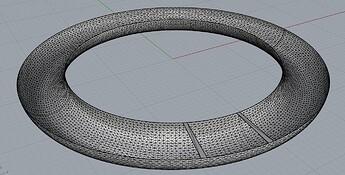 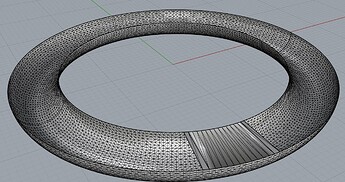 Hi @pschmidt an @ryan.odom, the commands _FillMeshHole and FillMeshHoles will both fail with the geometry shown in your last picture as they are designed to fill a single planar area only.

To create a fill mesh similar to the cap command, i would suggest to first to make sure your mesh is fully welded using _Weld 180 degrees, then duplicate the 2 naked edge border curves which are polylines:

Next run the command _PlanarMesh to create a mesh cap: 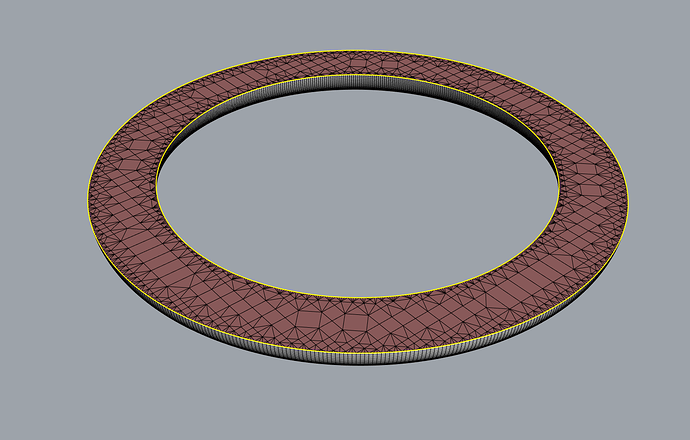 Next, select the cap mesh (red in above image) and make sure it’s normals are pointing in the desired direction, you can do this using the _Flip option of the _Dir command . Once done, join and export as STL for 3d printing.

Note: if _PlanarMesh does not give you the desired result, it is either that the 2 input polylines are not closed or not in the same plane.

@clement While I agree with your method, I think it assumes that the user has a continuous loop of naked edges to start with. In this case, the user has a found STL file which could be riddled with gaps and other issues.

FillMeshHoles will both fail with the geometry shown in your last picture as they are designed to fill a single planar area only.

FillMeshHole works just fine on non-planar holes and I suspect is not the problem here.

@pschmidt Could you run the “ShowEdges” command on your complex mesh, set it to “Naked Edges” and screenshot us the result in shaded view? 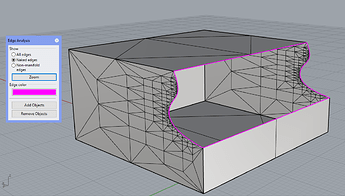 I think it assumes that the user has a continuous loop of naked edges to start with. In this case, the user has a found STL file which could be riddled with gaps and other issues.