Getting this again in V6. Seems like it started after I updated the most recent WIP. I don’t get it all the time, just occasionally over the last few days. Closing Rhino and restarting makes it go away and Rhinoscript is indeed loaded. 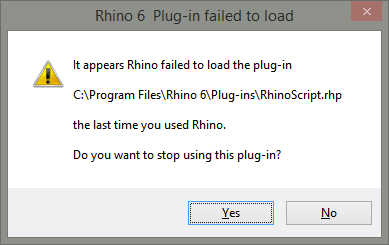 @dale - I saw this once or twice as well over the past couple of weeks - an update fixed it… I was monkeying with multiple V7 and 6 updates so thought it was likely just me but I guess not - any idea?

Nope. Didn’t do anything out of the ordinary except update V6 and the WIP (forget which order). Got it again this morning.

I am seeing the same here. Quite randomly but often enough to be problematic.

Hi all - can you tell if this is associated with opening a Rhino file from Windows explorer, as opposed to just opening Rhino?

Not in my case anyway, just opened Rhino from my desktop icon…

Hi Mitch - thanks - if you go ahead and open Rhino, you get (or, I get) a question asking me about whether I want to stop using the plug-in… if I answer no, and open Rhino, then close and re-open Rhino, it opens cleanly… but if I then open via a file in Explorer, I get the error again. At least that is what it looks like at the moment… Anything like that chez you?

Hmm, just installed the latest RC of V6 (via auto-update). No error message on starting for the first time after installation. No error either on subsequent openings, either by double clicking on a file or by using the desktop icon. Will try running the WIP now.

Nope, nothing exciting happening for the moment there either, after running the WIP once, still do not get the message when opening V6. But looks like there is also an update for the WIP that is in now, will try letting that install.

OK, so let the new WIP install, ran it once, then closed it and started V6 from the desktop icon. NO error. Double clicking a file in explorer also does not produce the error for the moment… so maybe it’s fixed?

I’ll let you know if it happens again.

Hi Mitch - it is not fixed here…Brian is working on a possible fix though. I’ll let you know.

OK, I’ll let you know if it happens again after a restart tomorrow.

same here! But after opening several Rhino6 instances it eventually get to load and works flawless.

Hi all - I think we will have a fix in for this in next week’s release candidate.

RH-60365 is fixed in the latest Service Release Candidate