Wish: Join to update the rendering mesh only on the affected faces

I see no reason for the rendering mesh of polysurfaces to be re-calculated entirely when just one or a few surfaces are being joined to a complex model. For example, currently I work with a 3d model of a car gearbox consisting more than 9000 surfaces and every new surface that I join forces Rhino to basically freeze for over a minute to re-calculate the rendering mesh of each individual surface which have been already joined and calculated prior that. In several occasions Rhino also crashed, making my entire work up to that moment a time waste. It’s really painful to wait so long for adding a simple surface to the polysurface. I think that Rhino should be more clever in how it re-calculates the rendering mesh. It should only do that with the newly added surfaces to the existing polysurface that already have a calculated rendering mesh, as well as the adjacent surfaces. For example, if I join a single surface to 4 surfaces that are part of a polysurface consisting 9000 already joined surfaces, then Rhino should only -recalculate those 4 adjacent joined surfaces along with the newly added surface (a total of 5 surfaces instead of 9001 ones). That will substantially reduce the waiting time and probably reduce the risk of crashing Rhino due to excessive memory usage after several join operations. Joined surfaces that are not modified should be ignored by the re-calculation of the updated rendering mesh. Extracting a surface from polysurfaces does not need to re-calculate the entire rendering mesh and is blazing fast, so why don’t make joining a surface also this fast? 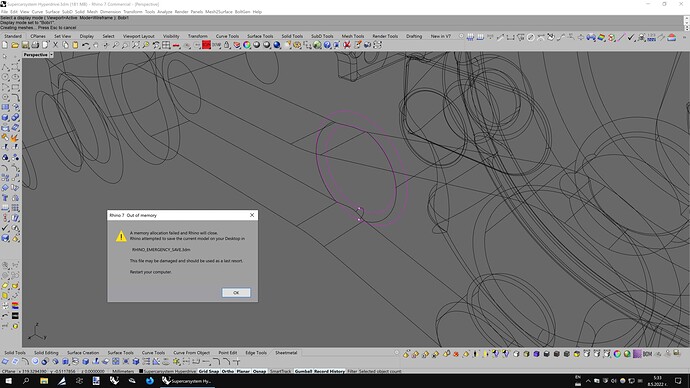 I agree in the request. It’s smtg that always makes working very slow.