Where is the Rhino Toolbar icon located in the installation directory? I want to edit them in bulk

Where is the Rhino Toolbar icon located in the installation directory? I want to edit them in bulk

As you can see, I have brought a beautiful dark appearance to the rhino. In any case, the dark appearance is an attractive option, although it is not perfect yet. I edited the Windows Style file (msstyle) and it is not ready yet, otherwise I will share it in the forum. For Rhino’s self-built controls, you can edit the color through Tools>Options…>Advanced, or Tools>Options…>Appearance, and you can also import or export.

Here, the most terrible thing is the icons on the toolbar, all the lines are black-this makes them buried in a dark background-the emphasis is on the white, so I need to make them all White, just like the mac version of the rhinoceros.

Here, McNell, Rhino Toolbar Images [McNeel Wiki], provides png of all icons, even in vector format, including .ai .xar files. I don’t want to import them one by one. I want to know which file they are in, such as .dll or .exe. I can use some software to batch extract and import pictures to replace these icons in batches.

I assume the images are contained in the .rui (toolbar) file…

Where is that files？

Note that AppData is a hidden folder, to get there, at the Windows Start button type %appdata% then navigate to the folder above. The default toolbar file is called default.rui

How to edit that file please？I know I can save as a rui file，but I want to edit all the icons.

I currently do this,

First，
hold down Shift and right-click, select “Export all size icons” on the editing window, edit it in PS before importing, but such an operation can only edit one icon. And the total number of icons is thousands, so the efficiency is very low.

Second，
I select “Save as Toolbar” or “Export Toolbar” in “Options”, select all and save as a new *.rui file, then open a new file to start a new rhino. Although the rhino saves all the advanced settings and interface settings (as shown above, I edited the color settings in many places), but the toolbar icon of the rhino is still before modification. So I imported the toolbar in the options and imported the *.rui file I saved as before, but it still did not work, and the icon did not change.

I want to know where all these full-size rhino toolbar icons are stored on the disk and how to read them. I can extract them at once and edit them. If they are on one picture, I can directly frame the area in PS to target Sexual editing (some can be directly inverted, some need to be colored, some need to be post-processed such as hue -50%, and some need to be redrawn); if they are independent files, they can be batch processed by recording PS actions ; It doesn’t work…or at least it allows me to export files individually and work on new programs.

Very nice theme @shomnipotence - I have a couple of questions for you:

HI @pascal and @Helvetosaur, does anyone has an answer on the last comment from @Ben_B? I would be very interested in a dark theme as well.

The controls that marked by the arrow are control by MS Windows Visual Style. The file locates in C:\ Windows\Resources\Themes<Skin Name> folder , named *.msstyle, the default name is aero.msstyle. 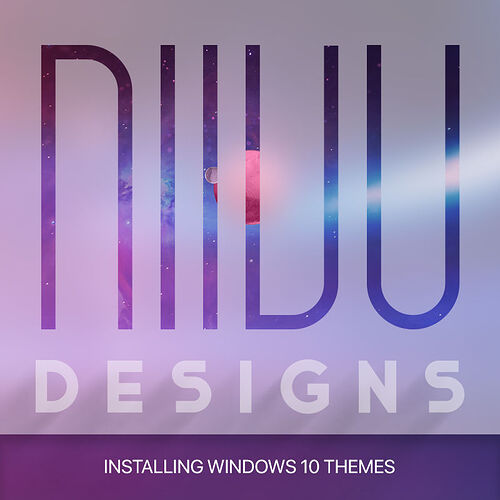 the capition of how to edit my style of mine by myself.?

MSSTYLES is a Microsoft file format, that contains the bitmaps and metadata for the Windows XP skinning engine, first introduced in Windows Whistler Build 2250. The engine, in its unmodified state, only fully applies .msstyles files that have been digitally signed by Microsoft, such as Luna or the Zune theme. The default Windows XP style is known as Luna, but additional custom-made styles are available on the Internet – however, few are digitally signed. Four other signed styles for Windows XP i...

and you can urge McNell to change Rhino to Morden UI ( WinUI3 ), it support dark mode natively

As for the icons, I found that Rhino for mac has all the dark icons, just find a way to export them

But how does that work? Please let me know when you found something

Thank you @pascal . Could you tell me how what padding settings I should use to export the ruibitmaps and what command do I need to import it back in? Thanks - and also looking forward to Rhino8!

Hi Clemens - per button you can export ‘All sizes’ 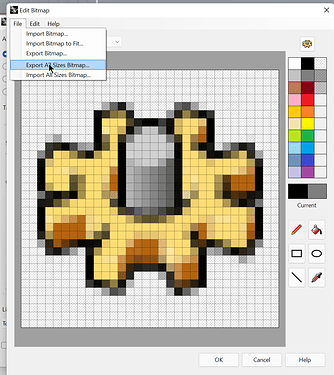 but of course this is not practical for the entire set. There may be a way to do the whole set as a test command or something, I’ll see what I can find out.
Note the images have alphas so many of them will just work if windows is set to some dark scheme but there are many that do not - the ones where the drawing is dark or in black.

@pascal thank you - my idea was to use your extractRuiBitmaps command and invert all images in Lightroom. But my problem is that I don’t know which export settings I should use (padding) and also how I should get them back into rhino?

Yeah… that seems like a real pain to me - you’d need to extract once for each size (I would set padding to zero all around I think) but then getting them back in would be another one-by-one operation, at least as far as I know. It might be less painful to use the defaults in the dark mode and see which ones do not work - then export these as ‘All sizes’ from each button, process them however you are going to do that and then import as all sizes again. Tedious but possible. I do not know of another way myself, but even though I maintain the toolbar set, I have never been in the position of doing the entire set at once so never asked for the tools to do that. I’ll ask the developer.

@JohnM - is there some system I am forgetting that might make this easier in V7: Dump all the RUI birmaps, then bring them back in after some processing by the user.
?

You can use the ExtractRuiBitmaps with no padding to get the exact bitmap but I don’t recall a tool to bring them back in. I will poke around and see if I can find one but I don’t think it exists right now. To really make this work you would need a command that dumps the small, normal and large bitmaps into a series of directories using the bitmap ID as the file name. This would give you a bitmap for each macro or tab at all three sizes. Then you would need another command that would iterate the folder and replace bitmaps in the specified RUI file with the modified versions from the disk. @pascal If you log a bug for me I can take a look and see how hard this is.