Sorry if I misled you to think that I only thought this happened on this single isolated computer. I was referring more that this may be more isolated to a specific set of hardware.

Could you provide the contents of the OpenGL page for V5? 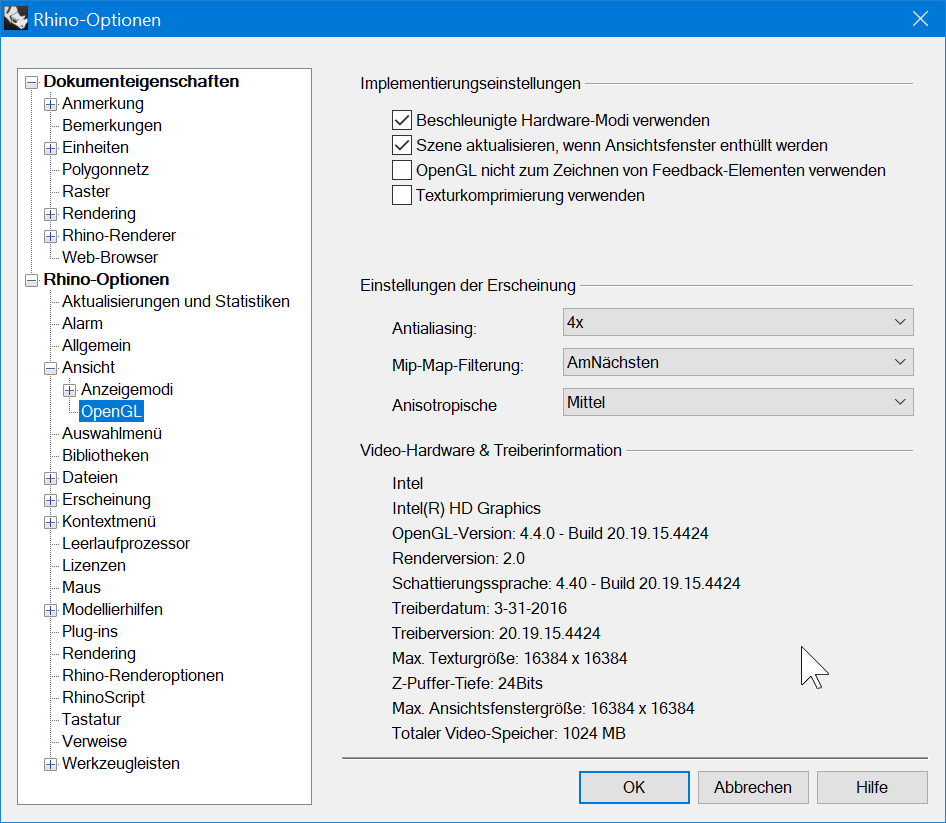 Good that you asked for the values, now we know V6’s display is only half as fast as V5…

Q:
Can it be that it has to do with the DPI aware line weight?
Is it possible to switch off the feature to test this?

Can it be that it has to do with the DPI aware line weight?
Is it possible to switch off the feature to test this?

It is possible since V6 is DPI aware so it may have to be computing pixel colors for four time the pixels. This isn’t really an option that we can turn off since it is an application level setting. That said, I work on several high DPI computers for V6 development and am still seeing much faster times in V6 than in V5. This leads me to believe there is something we are doing in V6 which the driver on your computer doesn’t like.

I have picked up several used computers for testing and will start looking around for a Surface 3.

Sorry I’m late to this party…I just saw this…

V6’s Shaded display is significantly different than V5’s…in that it’s ALWAYS using shader based rendering, which currently only implements Phong shading… Shaded mode uses three custom lights, which means millions of per-pixel lighting calculations are going on per frame in V6’s Shaded mode, whereas, ZERO are occurring in V5’s… For a more valid comparison…You really should CHECK the “Advanced GPU lighting…” setting in V5’s Shaded mode…that will cause V5 to use shader based, Phong shading as well… Pretty sure the results will be much more comparable.

That being said… It has always been my intention to write a per-vertex lighting shader for V6, once most of the new architecture settles down. I’m also pretty sure I can get a shader working better and faster than the fixed function OpenGL pipeline, which is what V5 uses by default for Shaded mode…but won’t really know until I start digging into it.

Until then, Shaded mode will continue to use complex shading and lighting calculations…which will/does impact performance, especially on lower end GPUs.

@Jeff
You are right, Advanced GPU lighting was off, I forgot about it.

When we see the 2 latter values, it is still only the half.

Q:
What will be the advantage of the new method in V6?
For me as a dummy it sounds like a lot of work for performance problems.
Of course, that can not be the truth

It still seems odd that it’s 2x slower than V5.

I have attached a Device ID application that will identify your exact GPU… Unzip it, and run DeviceID.exe…and allow any security stuff that pops up to go through…it’s safe, I wrote it

Take a screenshot of the dialog that pops up and post it. 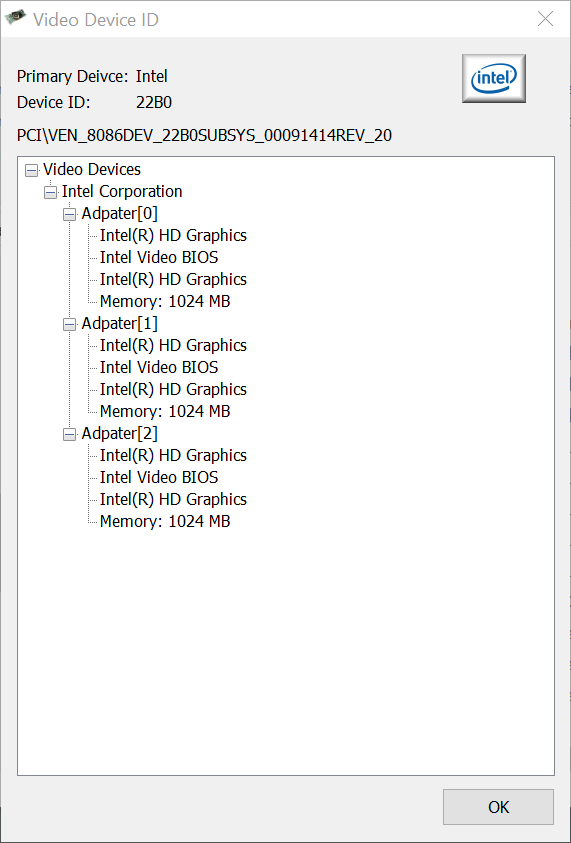 When you maximize your viewport in V5, what width and height does the viewport properties read?

When you maximize your viewport in V5, what width and height does the viewport properties read?

The difference is because of the viewport tabs and the toolbars in V6.

No Windows scaling, V5 is not blurred.

not sure if you changed something in the meantime, so it is just a remark:
The display is still slow when it comes to shaded modes.

Hello to everyone,
I have just found this discussion, so I am joining it, hoping to provide some valuable feedback. Like Charles, I am experiencing a very slow graphical performance in Rhino 6 too (I also tried to explain in another thread), which makes it hardly usable, the rare times it doesn’t even freeze/crash my system and I have to reboot it. Therefore, I thought about doing a little video showing what I see on my system, which, despite being “vintage” according to Apple, has worked beautifully on Rhino 5, even with complex models. This vintage system is a Macbook Pro 17", with i7-2860QM 2.50 GHz, AMD Radeon HD6700M, 12GB RAM, running Windows 7 Pro 64bit on Bootcamp. I have used the file called “Finished Detergent bottle.3dm”, which can be found in the Level 2 training. I have then set up on both Rhino V5 and V6 a Turntable Animation of 30 Frames in Shaded mode and recorded the Animation Preview with my phone on a tripod. As you can see, the rotation in V6 is superslow, while in V5 it is almost instantaneuos. It takes me long time even just to open the same file. You can find the recorded videos at the following dropbox links (sorry for the quality):

I hope this will help to move forward.

@luca_biselli Thanks for the videos.

What is the resolution of the viewport when maximized? Are you getting similar performance results when rotating the view with the right mouse button held (instead of using turntable)?

Could you do the following:

Start by maximizing the viewport so that you only have a single, large viewport in Rhino.

Finally, what is the resolution of the viewport that you are using to do these tests?

Thanks David.
The screen resolution is 1900x1200. Yes, I do experience the same slow performance also with the right mouse rotation. I have tested Rhino 6 Wip also on a less powerful machine I own, a Macbook Air with Windows 7 Pro 64bit running on Bootcamp and it’s the same. I should try now with Windows 10 Pro, which I have just installed to see if there is any way forward. Furthermore, very often, during the rotation in v6, the system freezes/crashes and I have to reboot it. Being in the middle of constant deadlines, I decided not to use v6 for the time being, as otherwise, I would not be able to work smoothly as I do on Rhino 5. I thought there was a way to get a sort of automatic crash report, so that you would be able to identify what is also causing the technical issue? As I pointed out in the previous post, it also takes long time just to open a file. I send you some additional videos showing just how long it takes to open the same file used for the previous demo. Please let me know how I can help further.

Hi David,
I tried the TestMaxSpeed on my system, always with the same file as before. Please find attached the results.

Hi Luca,
I have an old MacBook Pro with an AMD Radeon 6750M and it has been one of the most difficult display drivers to support as we move forward with Rhino display development. I have spent countless hours just trying to make this computer draw geometry on the screen without causing the whole computer to crash. This model isn’t even supported by Apple for updating to the latest OS and we couldn’t get our internal V6 version of Mac Rhino to work with it. It sounds like you have a slightly different MacBook Pro model, so things may be different for you. Are you able to update to Sierra with your computer?

At best, we are hoping to get V6 to display geometry as fast as V5 for the very specific hardware setup that I have here. Your hardware may be different, but it does sounds awful similar.

Hi Steve,
Many thanks for your message. The Windows driver support on this graphic card has been stopped by Apple, therefore I have just the latest 2014 driver for Windows 7, which I understand is not recent. However, there are drivers for Windows 10 on the AMD site, which I am now considering. I am just not ready for the move, in case something doesn’t go right and I cannot work. Although I have also a Rhino for Mac licence, I am currently not using it, simply because all the work I do is set up on Windows 7. I do have Sierra on the Mac partition though. I would be more than happy to have at least the same performance I have on Rhino 5. Rhino 6 slow responses, however, can also be noted on a more recent 2012 Macbook Air I have with similar bootcamp configuration. Even there, same problem, although I have not tested it enough to experience crash. Rhino 5 works beautifully there, despite not having a good graphic card. I am glad you are experiencing the same system crashes, as I was feeling too lonely in this family of issues! Thanks.

Make sure the Wireframe, Shaded and Rendered display modes are using the default settings by clicking Reset to default in the display options.
Done.

****Create a sphere while in Wireframe mode.
Done.

Disable the skylight by going to the Rendering tab and unchecking Skylight.
Done.

Now go to the Display tab and disable shadows by unchecking the Shadows checkbox.
Done.

Finally, what is the resolution of the viewport that you are using to do these tests?
1417 x 894

Isn’t it easier to get a device (see post from May 10)?
And more promising to get the thing solved?

Hi Charles,
We’ve bought plenty of older computers and tested on them. I’ll probably eventually have to get a Surface 3, but there are other display issues that I am currently working on that affect everyone using Rhino.