It took me a while to realise how to keep the local orientation of twisted box while manipulating them. Now I need to subdivide a number of twisted boxes and I think “Twisted box array” fits the purpose.

The problem is that apparently this operation works with other orientation than the original twisted box, I am not sure why. 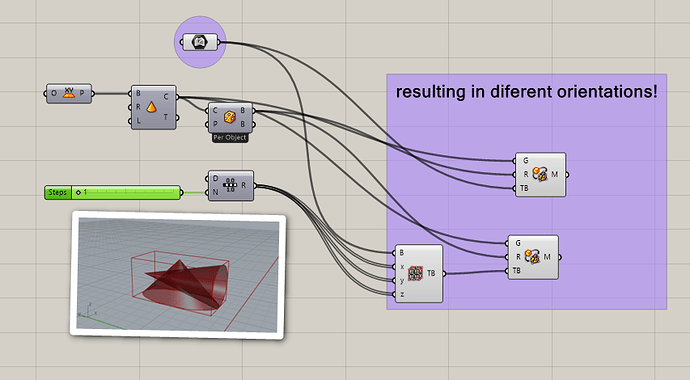 To make clear, the example here with one subdivision that in theory should return the original twisted box.

I found that the “twisted box array” operation works on “global” orientation not sure why. I find this a problem as in my application the local orientation should prevail.

In general you shouldn’t use Twisted Boxes for inputs that ask for a regular Box or gh will convert the Twisted Box to a world oriented Bounding Box.

I would like to point out that you are not subdividing your twisted box, you are using twisted box array which constructs a new array or twisted boxes from a box, by you plugging a twisted box into the array components B input you are making Rhino Gh convert that twisted box essentially into a world oriented bounding box (that is just what gh is set to do in that conversion, I do not decide that) and that is why you get the global orientation.

If you wish to keep your local orientation and actually subdivide a twisted box, then use the tool made for that which is called “Subdivide Twisted Box”. (see attached). Or use a box (not twisted box) for the Twisted Box Array B input which is oriented in the way you want it to be. (do not rely on Rhino Gh to make this twisted box to box conversion through the input like that, as previously mentioned, that will cause Rhino Gh to convert twisted box to a bounding box and bounding boxes are world oriented, why does it go to bounding box you might ask? because a twisted box isnt always a pure box shape, it can have corners arranged in ways which are not a pure box, so this is the only logical box Gh can make automatically, a bounding one).

Hope that is clear!

Thanks a lot for your answer. It makes sense now. It would be great if the subdivide twisted box could have individual inputs for each axis though.

There is no need. As mentioned above “Or use a box (not twisted box) for the Twisted Box Array B input which is oriented in the way you want it to be.”