Hello,
I was wondering if anyone has any thoughts on how can I produce a model similar to the picture attached. Unfortunately, I don’t have a certain algorithm in mind (but I`m open to suggestions) and I don’t want to use the Voronoi diagram. 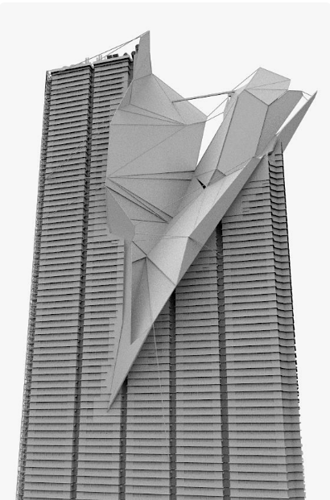 My gut reaction to the building with a “parasitic form” tacked haphazardly to its top was one of instant revulsion. I think it is hideous. However, I regret using a simplistic and likely offensive emoji to express myself and must apologize to @SHF for that.

A wise person once said that before making any statement, one should ask three questions:

In this case, I failed to consider #2 and #3 on that list. The building has no architectural merit IMHO, but that’s no excuse for being rude. Please don’t take my reply too seriously.

Does not look like grasshopper to me and seems pretty quick to model in Rhino directly. There doesn’t seem to be any underlying parametric logic.

yes, that is not the same project. Rasha’s project has some logical system, rules (watch the video). Have you decided on some rules?That would be a start. Other than that, the help you can get is, make a cell or hull polysurface, boolean it from an extruded volume.

It looks like the “architect” made some kind of randomly shaped closed mesh (edit: okay, at 1:40 the narrator mentions voronoi, so that may have been done somehow in GH) . They were likely baked seperately, and the voronoi feature was stuck in the top of a tower using a boolean command.

But seriously, why would you want to duplicate it? I share @Joseph_Oster’s sentiments.