Suggestion: pop up menu with tools

After many hours of working with grasshopper, it becomes a little tiring having to double click, type and select components over and over. (especially for the ones you use very often, like sliders)

I was looking for a plugin that could display a pop-up menu but couldn’t find any, so I’m posting it as a suggestion:

The wheel click menu is but a repetition of the right click menu (although much fancier!), so why not replace it with a menu where a user can put as many of his favorite/ most often used components (and even ‘bricks’/ sets of components).

That way, travels of the hand from the mouse to the keyboard and back could be reduced to a minimum. 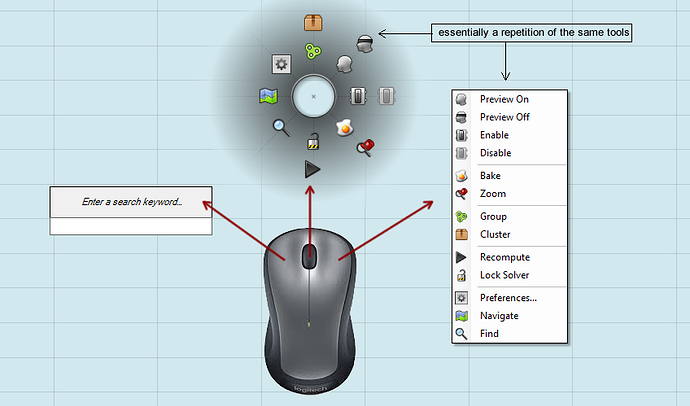 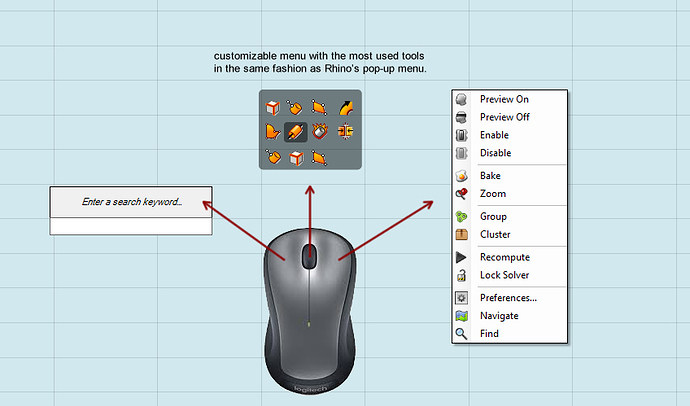 Widget to select and instantiate components from the canvas. It uses an XML database to record the more frequent components and connections between components…

Hmm that is how you can make me use the radial menu, because I found no reason to until now

If you’re running a recent GH, then adding sliders should be as easy as:

the point I am making is not having to touch the keyboard at all. With a widget like this it would be just two clicks.
e.g. I have a slider saved as a user object with values 0-360 and snaps at the quadrants. Currently I press spacebar-3-(module appears)-enter.
It would wonderful to have it on a popup menu and bring it to the canvas with just two clicks.

Incidentally, I haven’t managed yet to make axon work. the instructions are a little confusing and I’m getting some errors.
Does anyone have it installed in v.1?

There is no version 1 published. What errors do you get?

I followed the instructions and it is not working.
I then tried running the .gh file in hope that if I update the database it would work. I realized it wasn’t essential.

There is no version 1 published

does the old one work with Rh 6?

P.S. I just realized you are the creator. Very nice work! pls update it!
P.S.2 To the McNeel company: Hire this guy!!!

Go to Display > Canvas Widgets, do you have Axon active?

If you don’t tell me why it doesn’t work for you, I can’t do anything, it’s working for me.

I’ve put the .gha and .xml file in the Libraries folder (and restarted Rhino) but still the axon widget does not appear in Canvas widgets dropdown…

Try right-clicking on the.gha, go to file properties, you may see an unlock option at the bottom of the prop window. In this case, restart RH+GH.

EDIT: Damn! It was the folder of Rhino 5 (I installed it on both versions)
now it’s unblocked in 6 and it’s working fine!
Thanks Daniel!!!

Why don’t you put Axon on Food4Rhino? I didn’t know about this plugin.

This will definitely be one of my favorite plugins.

Does this work on Mac? Looks very interesting.