randomly. What is causing these issues? Has anyone else experienced this problem. 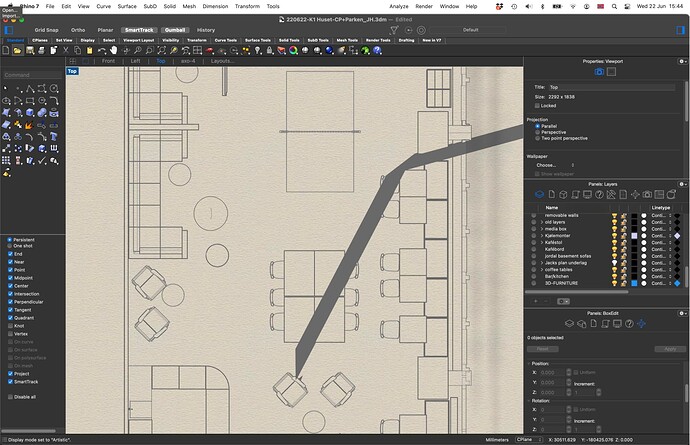 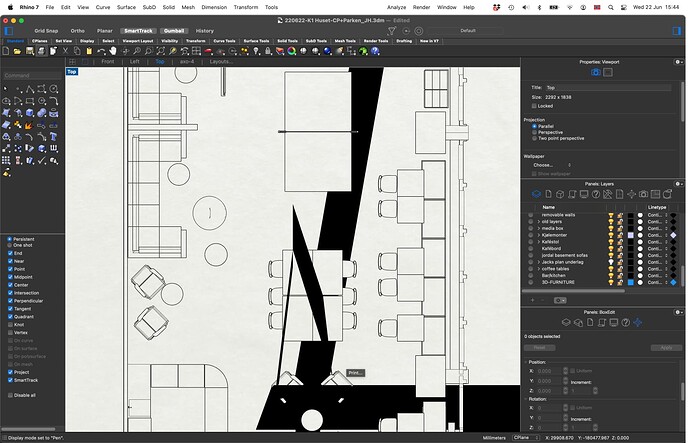 It could be one of several things:

My best guess based on the display modes you’re having trouble with, is the problem is with the OpenGL drivers in Monterrey.

Please send the following to tech@mcneel.com:

Will do, thanks for the feedback John.

There are no bad objects in the file.

These observations add credence to the thought that the problem is with the OpenGL drivers supplied by Apple through Rosetta on the Silicon Macs.

My best suggestion is for you to try the V8 WIP which is a native Silicon application, and supports the new Metal display tools.

One of the developers has managed to repeat the problem.
Several others were not.
We are investigating.

It appears that something changed in Rhino back in 7.16.
7.15 doesn’t seem to have the problem.

The developer is going to dig into it tomorrow. Hopefully he can find something.

The developer determined the problem is with Rosetta, Apple’s translation layer that is intended to support Intel compiled applications like Rhino V7 to run on the Silicon Macs. Their code is pretty buggy.
To work-around the bug in Rosetta, we had to add a bit of code that we were able to remove for all other platforms for faster performance.
This tool will be turned on only for Mac Rhino V7 SR21 (and newer) when running on Silicon Macs. The performance hit should be minimal.

I am testing the fix now.
I’ll let you know when it’s ready to go.

Thanks for looking into this John. I am having the same problem since upgrading macbooks. The old macbook opening the same file on the same version of rhino doesn’t experience the issue. Looking forward to the fix

Awesome, works great! Thanks for the fix, a big help.